A generous gift certificate from George and my income tax refund were burning a hole in my pocket. And I had been lusting for a drone to take panoramas of the Mackenzie Delta and pingos near Tuktoyaktuk this June and images of us hiking this fall along ridges and cliffs above the fjords of Norway.

Recently, DJI released its Mavic 2 Pro with a mini-Hasselblad camera. Very tempting. But then Costco put the older Mavic Air on clearance pricing. Fantastic specs for a one pound flying camera—4K Ultra HD, twenty-one minutes of flying time a four kilometre  range, Active Tracking and the possibility of controlling it with hand gestures. Sold.

It wasn’t until after I bought the drone that I began researching the regulations around flying them.

I learned that you can’t fly a drone in Vancouver without a Special Flight Operations Certificate from Transport Canada (TC). And that effective June 1, 2019, new regulations will require all drones weighing more than 250 grams to be registered. For $5, I got mine registered. 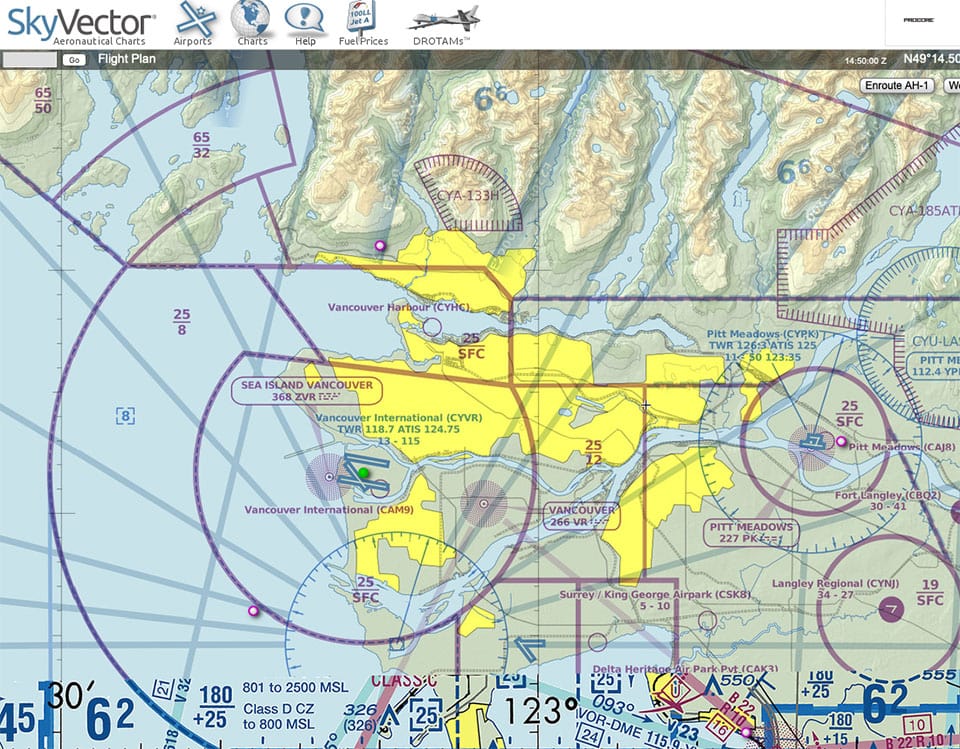 SkyVector.com not only shows aerodromes, airspace restrictions and weather stations, but also have a special DROTRAN feature for notices to Drone Operators

But horrors—I also need a Basic Pilot Certificate! To get one you, must write an on-line (open book!) multiple-choice test of thirty-five questions and complete it within ninety minutes. To pass, you must score better than 65% or else take the test again after waiting more than twenty-four hours, each time at a cost of $10. If you pass, your drone must stay thirty metres away from bystanders, and never over them.

BUT HORRORS! For the Basic Pilot Certificate test, TC has a forty-two page Examination Guide summarizing the required knowledge areas, but not the answers! In the Amending Regulations published in December, TC estimates that it will only take three hours to study the following material to prepare for the exam:

By comparison, the BC Handbook to study for a Driver’s Licence is only 184 pages and written in plain English supported by many diagrams. That licence will allow you to drive a 1,800,000 gram car in really close proximity to people and other vehicles.

Where to start? As an engineer, I’m somewhat familiar with Newton, the apple-pie guy from the UK and Bernoulli, the Italian pastry chef who first blew whipped cream out of an aerosol can. Center of gravity and center of pressure are concepts that Boeing could have done a better job with on the 737 MAX, along with redundancy. But what about those squirrels?

After skimming through half of the TC reference material, I stumbled upon Don Joyce’s Droner’s Guide to the 2019 Canadian Drone Regulations where 72 minutes of video capture most of what you need to know for the Basic Pilot Certificate test. He has another 168 minutes of video to prepare for the Advanced Pilot test that I chose to watch—why not?

Hours, well four days later actually, it was time to write the test. The TC reference material in pdf format was carefully arranged on my computer with the Acrobat FIND feature at the ready. I had a second screen set to GOOGLE in case there were any questions on topics I didn’t study—say, helicopter control systems—there were!

My final screen was set to the Exam. To credit TC, the test has a really nice interface. You can skip questions and come back to them later, there is no penalty for wrong answers so if you don’t know, it’s wise to guess, and there is a clock showing your remaining time. It took me only sixty minutes to complete, and after pressing FINISH, it took only two more minutes to be awarded my Basic Pilot’s Licence with a 94%.

Now it’s time to figure out how to turn this drone on.