Gorgeously photogenic, the orange and peach striations on the rock above the granaries make it look like an incendiary inferno is engulfing the roof

During our 79-day tour of the southwestern US, one of our favourite wilderness areas was the 1.35-million-acre Bears Ears National Monument (BENM) in southeastern Utah. On the weekend of May 13, we hiked into House on Fire, one of the most famous Puebloan ruins in BENM. It’s so dazzling we went twice, on Saturday evening when the low rays of the sun ignite the virtual fire and again the next morning when we did a longer hike to see other ruins in Mule Canyon. Although we didn’t see US Secretary of the Interior Ryan Zinke, ranger Dan told us he was in the area—on a mission—the results making news around the world this week.

BENM was proclaimed in December 2016 by President Obama in the twilight of his final term. The proclamation, under The Antiquities Act of 1906, was controversial and deemed by many to greatly exceed the “smallest area compatible with the proper care and management of the objects of historic or scientific interest.” So on December 4, 2017, Obama was “Trumped” with a counter-proclamation, splitting the BENM in two, and shrinking its size substantially—by 85% to 200,000 acres. Trump promised future “wealth and wonder,” re-opening the area for more cattle grazing, mining and resource development.

We spent a week in BENM this year. Here’s our take on the House-on-Fire news this week.

Honey, I shrunk the Monuments!

Here are some of the precious areas that we visited within the newly proclaimed Monuments that will now have relaxed restrictions compared to the protection they received under BENM:

On Saturday, alone at House on Fire, a raven startled us with her squawking, as if she were the ancestral guard warning us not to get too near 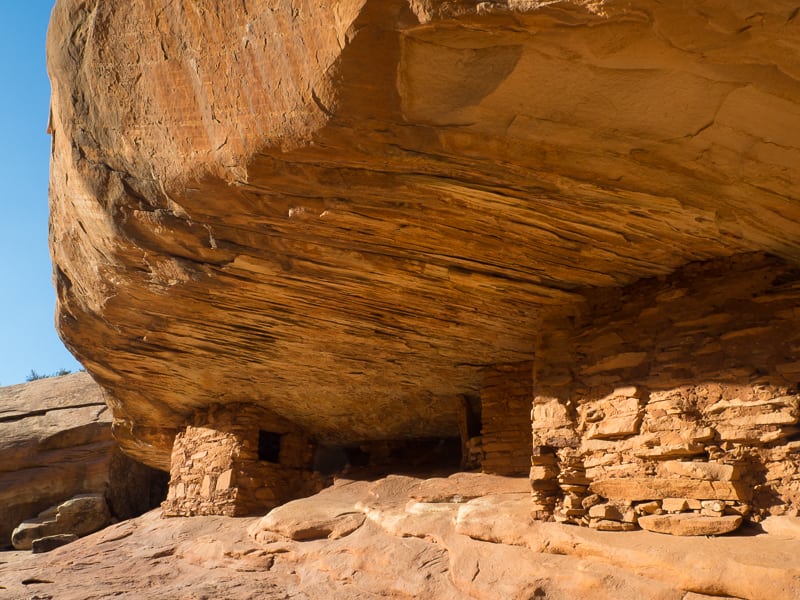 House on Fire isn't a house; it’s a group of granaries constructed over many decades for storing corn and other crops

Uplifting your sense of awe

Comb Ridge, a “great wall in the middle of the desert” was a “cardinal line” north to south for the Ancients

Lifestyle section in the open-air tabloid

Why was Bears Ears designated a National Monument?

BENM, a geographically diverse area in Utah’s San Juan County, has about 100,000 Puebloan archaeological and cultural sites—a higher density per square mile than any other county in the nation. Tagline: “The World’s Greatest Outdoor Museum!”

Being remote was its protection. Until the Internet. It’s estimated that visits to San Juan County tripled between 2005 and 2015 and doubled again in 2016. But as you might expect, among the increase came disrespectful visitors. They stole potsherds, camped in ancient dwellings, scrawled graffiti on rock panels, fired bullets at rock art and hacked off an ancient rock carving with an electric saw. In 2016 there was only one full-time law enforcement ranger.

What do people in Utah think?

Utahans aren’t happy that 66% of the state is federal land. But after its creation, 64% concurred that BENM should be protected. However, San Juan is the state’s poorest county so about a third of Utahans said BENM should be open for more cattle grazing and resource development.

The opportunity to comment was only open for 15 days! (We contributed several postcards)

Can a president rescind a National Monument?

No. In 1976, Congress passed the Federal Land Policy and Management Act that granted the power of monument modification solely to Congress. The Wilderness Society, the Native American Rights Fund and others have filed suits challenging the rescission.

What difference will it make to House on Fire?

After cutting BENM acreage by 85%, Trump carved the remainder into two little National Monuments: Shash Jaa (the Navajo name for the iconic twin buttes), and Indian Creek. House on Fire is in Shash Jaa. So is Comb Ridge—where our hike into Procession Panel was one of the highlights of our trip. (The Anasazi came to Comb Ridge in significant numbers: “communities packed with public architecture… inhabited for centuries by many different people” as Craig Childs writes.) Indian Creek protects another of our favourite Puebloan sites—Newspaper Rock.

We’d have preferred that BENM remained intact. Despite the problems of disrespectful visitors, the remote area has survived relatively unscarred for hundreds of years. Protection, surveillance and education are required for this to continue in the future.

The Bureau of Land Management or the United States Forest Service will manage the orphaned areas. The ruins in these areas will have minimal protection under various Acts and Regulations.

The orphaned 85% will be reopened to mining and resource exploration. Uranium and other minerals have previously been mined in the area. Mining law allows private citizens to prospect on federal land, access the area and stake claims acquiring rights to mine those minerals. The prospectivity for oil and gas is very low except along the eastern edge of the new monuments where a lease auction is scheduled for March 2018, and at an under-explored area just south of House on Fire.

Magellan and I gave the 15.1 kilometre round-trip hike through Kane and Grand Gulch to Junction Ruin and Turkey Pen Ruin a 5* rating 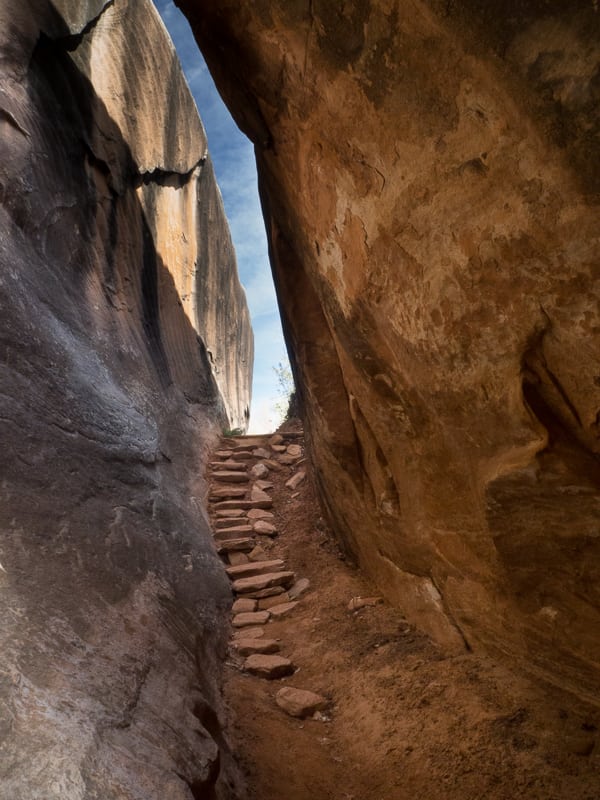 An accessible alcove at Junction Ruin

Discreet cliff dwellings “the hermit crabs of the Anasazi world”

At Turkey Pen, you find dwellings, granaries, a kiva, pictographs and petroglyphs of the Ancestral Puebloans

If the group of university students we met represents their knowledge of the Ancients, many more classes are required 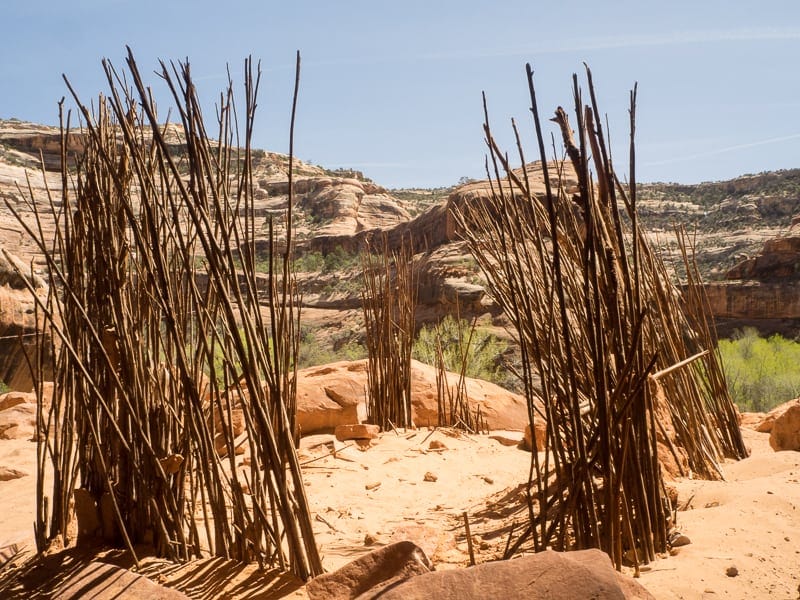 Fremont's Barberry named for John Fremont, an early explorer in the southwest, blooms April through July

The delicate Longleaf Phlox blooms at elevations of 4,400-to-9,600 feet

This pretty Blue Flax wildflower is found in canyon bottoms

Valley of the Gods, a 17-mile dirt and gravel road alongside towering pinnacles and isolated buttes

So what are the issues?

How effective will enforcement be on the 1.1 million acres of orphaned land where there are many Puebloan sites—including Grand Gulch’s Turkey Pen Ruin?

What perils will enhanced access bring? Motorized vehicles, including ORVs, will be allowed on any road that existed prior to December 2016. Within BENM, there were 1,400 miles of “roads” (wash bottoms, cow paths and two-track trails) that had been closed. Anyone who hikes the canyons and plateaus of southern Utah will inevitably see the scars and hear the whine of off-road vehicles across the landscape. Gone will be the supreme quality of BENM recognized in the document accompanying Obama’s declaration:

From earth to sky, the region is unsurpassed in wonders…Bears Ears has that rare and arresting quality of deafening silence.

Isn’t it a threat to democracy when you have the dictate of man trump the rule of law?

It makes you think about the phrase House on Fire doesn’t it?

Readers, this is serendipitous beyond imagination.

The phrase House on Fire was first used on Monday, December 4, 1741! Ready for this? It was in the book History of Friedrich the Second, called Frederick the Great in Chapter VI—“Mayor of Landshut.”

Burgermesiter Spener is speaking. Here’s what he says:

A Sovereign Mayor that governs by fear, he must live in continual fear of every one, and of himself withal. A weak basis, and capable of overturn in one day. On the contrary, the love of your burger subjects—that, if you can kindle it, will go on like a house on fire (Ausbruch eines Feueres), and streams of water won’t put it out.

Despite some depressing political decisions, southern Utah is an area we love to which we will return.

UPDATE: See the fantastic article “Food Fight” by Kathryn Schultz in The New Yorker, October 1, 2018, for more about Blake and Jen and what they are doing “at the remote outpost of the resistance” to Trump’s devastating order to cut 85% of Grand Staircase-Escalante.

Childs, Craig. House of Rain: Tracking a Vanished Civilization Across the American Southwest. Indiana: Back Bay Books, 2008. Our thanks to Russ Nordstrand for introducing us to a book with muscular writing that we devoured on our journey, a book that provided more history, insight and truth about the Ancients than any other source.

Copeland, Kathy & Craig. Hiking From Here to Wow: Utah Canyon Country. Birmingham, Alabama: Wilderness Press, 2008. Without this guidebook, we would never have known where to hike to see Ancestral ruins. As the Copelands write, because of “pot-hunting greed heads, destructive ORVers, and insensitive oafs…maps are mute with regard to archeology” and so are the men and women behind the desks at visitor centres, which is “sad, frustrating, and completely understandable.”

Salt Lake Tribune. Maffly, Brian. “Trump Turned Two Vast Utan National Monuments into Five Smaller Ones and Here’s a Look at the New Sites and Key Lands that got Left Out.”

A Lump of Coal for Christmas
Scroll to top