One of the joys of hiking in Europe compared to most anywhere else in the world is the reward of eating lunch at a restaurant in a mountain village enroute.

Take, for example, Hike #1 in Teresa Farino’s book Picos de Europa. But first, let me step back in time for a bit.

The Picos de Europa in the Cantabrian Mountains are about 20 kilometres inland from the northern coast of Spain. For many years, I’ve wanted to hike there. But there was one gnawing bit of negativity in everything I read about the area. The food. It’s heavy and old-fashioned, especially compared to the outstanding cuisine in the rest of the country, blamed on geographical barriers that make this area the most isolated part of Spain. Here, the menus are meat-centric. Meat: like blood sausage, tripe, pigs’ snout. Boiled, baked, mashed or grated, I love potatoes, but word was they’re usually the only vegetable on the menu out here. But as jubilados, infirmity may overcome us before Spain’s culinary largesse reaches the Picos.

Magellan and I were eager to do Hike #1 last September. Abutting the southeastern corner of Picos de Europa National Park, the hike traverses through fertile valleys, forests of pine and cork and three of the most remote villages in Cantabria’s Liébana Valley. Teresa describes this 18 kilometre hike very well—still, there was an unexpected and pleasant surprise.

The "tarmac" road up to Lubayo

Daboecia cantabrica is a dwarf shrub heath, one of the many varieties of wildflowers in the Picos de Europa

Starting to bloom in late summer, the Merendera montana "tells the mountain farmers the days are getting shorter and now there's no time for an afternoon nap"

"Head straight up through the village, ignoring any side turnings, until you arrive at a fork with a stone water trough in the centre"

By starting the hike at the “villette” of Cabariezo where we were staying in a Banff-in-the-1960s-style motel, we achieved most of the hike’s elevation gain early in the morning. The hike follows a narrow mountain road up to the first village, Lubayo, a road so narrow that when a farm truck came barrelling down toward us, Magellan shouted, “Head for the ditch.” Rural, mountainous and pastoral, Lubayo has the clean scent of freshly mowed hay, until your nose is blasted by the sharp smell of cow dung. The village’s dozen or so houses are built from blocks of stone without any mortar and decked out with Swiss-style wooden balconies. The village is remote but not silent—the loud, vicious barking of dogs, behind fences or chained, thankfully, protect Lubayo’s mostly vacant homes.

What a variety of landscapes there are on this hike. After we left the village, we walked through a forest fragrant with Monterey pines and wild thyme alongside Spanish gorse and prickly juniper. It was autumn, warm and quite dry, my favourite time to be hiking anywhere.

Infatuated with the view of Tudes, neither of us noticed the road behind this remote village

We must have been tiring given how long it took us to find the sign for the Collado de Porcieda, a viewpoint 100 metres off the trail. It’s posted as “Picu Cutiales.” Sitting on a wooden bench, we admired the peaks of Andara and Urrieles, quenching our hunger with oranges from our lunch-and-water-laden backpacks.

Yes, we were carrying lunch. Sausage, the area’s famous Cabrales blue cheese, chocolate and about four litres of water… We can’t really blame Teresa as her guidebook mentions “the cheerful village tavern” in the village of Tudes (pronounced Too-dez). Sure, she makes no reference to its food but everyone (save me) knows a tavern is going to have water.

Lovely, the lane into Tudes, isn't it?

On the verge of collapse, the population of Tudes had fallen to only 30 or so people

Here on the Eastern Massif of the Picos de Europa, the highest peaks are about 2200 metres

Tomatoes ripening on the vine

Wheels of the past, still rolling 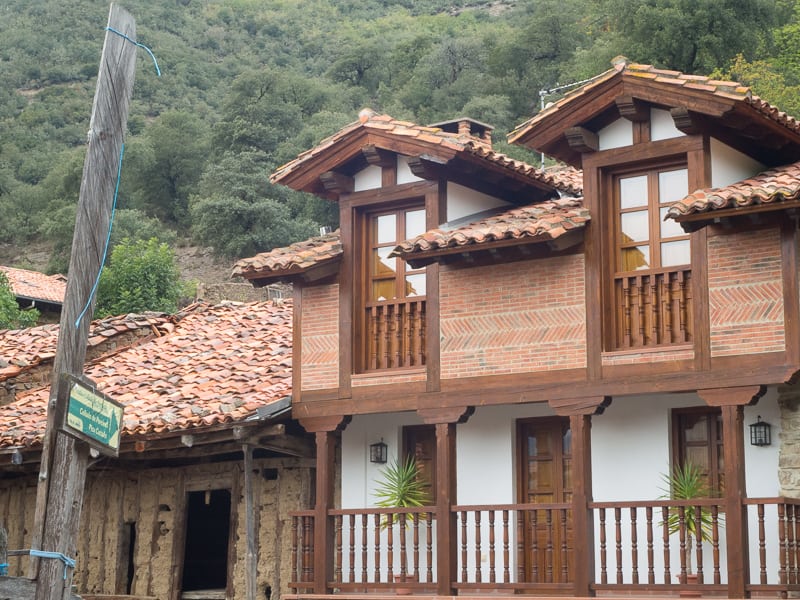 Tudes, with its well-preserved architecture in a quintessential mountain setting, could be a contestant for the most beautiful village in Spain. In the village square under the walnut trees, the first people we encountered were two elderly gents walking spryly, deep in conversation.

Cheerful, just as Teresa described, the Taberna del Inglés is owned and managed by British-born Tony Bastian and his Spanish wife Lucia. After serious renovations, they opened in 2009. It’s a sit-up-and-take-notice sort of place with a snazzy bar, patterned-tile floors, chairs with bright-coloured polka-dotted cushions and old black-and-white photos of Tudes villagers adorning the stone walls. What’s really striking though, are the hand-painted murals.

"Dance me to your beauty with a burning violin"

“Let’s forget about our packed lunch and eat here,” said Magellan as he glanced at the menu after ordering a beer.” So what did we order? Meat and potatoes!

“Do you want to see the museum upstairs while you wait for your lunch?” the pleasant young waitress asked us.

The house-made hamburger came on a slim, well-crusted bun. The mixed salad was more than passable. And the fries: we ranked the French fries right up there with those from Go Fish in Vancouver and Jamie Kennedy’s restaurants in Toronto.

We were a little surprised when a jubilado couple, obviously tourists given her gold-threaded sweater and matching jewellery and clearly not hikers based on his paunchy frame and beach-like sandals. How did they get here? That’s when we looked carefully at the maps in our guidebook. You can drive there! On the other side of the village lies an access road (paved!) from the N-621—Tudes is only a 15-minute drive from Potes, the main town in this part of the Picos. We also discovered that Tony and Lucia own La Casa de las Chimeneas, charming vacation apartments in Tudes in rustic stone houses that they’ve refurbished.

Maybe I never found La Casa de las Chimeneas when we were planning our trip, or maybe it was completely booked. But if there were a next time for us in the Picos, we’d be playing pool and darts after dinner in the taberna, sleeping in a renovated centuries-old farmstead and hiking from Tudes in the morning.

Farino, Teresa. Picos de Europa. London: Sunflower Books, 2015. The first hike in her book is a real winner. Soon after leaving Tudes, we arrived at Porcieda, the third remote village and the only one that’s totally abandoned—but it’s for sale as you can see in the captions below. Then it was downhill through forests of Pyrenean oak and cork to the outskirts of Potes and then five kilometres along a scenic pathway back to Cabariezo.

"Of all the paths you take in life, make sure a few of them are dirt" John Muir

The abandoned hamlet of Porcieda

In 2015 the entire hamlet of Porciedo was put up for sale—3,052 square meters, zoned for construction, for €1.5 million

A prospective buyer was interested in refurbishing the 10 buildings in the hamlet into 45 rental apartments—maybe it's still available: Antonio Avilés, Mikeli Property Agents

Here, you can find out more about the apartments Tony and Lucia rent and the Taberna del Inglés, from which you can even get bread and croissants in the morning.

We started and finished at Cabariezo, adding approximately 5 km to the roundtrip.

Quixotic in a Mercedes

The Most Wondrous Temple in the World

Our Favourite Tastes of Sicily
Scroll to top