"Those who dwell…among the beauties and mysteries of the earth are never alone or weary of life.” Rachel Carson

Something unexpected happened on my birthday a few years ago.

I met an ermitaño. In Spain.

“A what?” you’re probably asking.

The mellifluous ermitaño is an individual who chooses a vocation of solitude. Maybe more people in Spanish-speaking countries choose this life for the loveliness of the word ermitaño compared to its guttural equivalent in English: Hermit.

We certainly didn’t plan to meet an ermitaño that gorgeous autumn day in Priorat. Taking Lynn’s advice, we drove to the small, cliff-top, 12th-century village of Siurana. It was the last holdout for the Moors in Cataluny. You can easily see why—the steep escarpment in the Tarragona Mountains on which Siurana is perched forms a natural fortress. Legend has it that rather than fall into Christian hands, the Moorish Queen Aldalaiza rode her horse off the edge of a cliff—we saw the scar in the rock that’s said to be the hoof prints of her horse “frantically pawing the rock in its attempt to stop their plunge into the abyss.” The cliffs nearby are just as steep, challenging professional climbers from around the world to test their 9b-mountainteering skills.

The ancient village of Siurana

On the more precipitous cliff, where Queen Aldalaiza rode her horse off the edge

The start of the Siurana hike

“Don’t worry, the hiking trail won’t be that tough,” said Magellan earlier that morning as we were driving up to Siurana. Being a good sport, I agreed to have a look at it. But after seeing the narrow trail and vertiginous drop-off (and those hoof-prints!), I decided I didn’t want to risk missing my next birthday.

Because it was Monday, the few tourist attractions in Siurana were closed. “So what shall we do?” Magellan asked.

Cristina, the owner of the Cal Llop Hotel where we were staying, had given us an excellent little map of the local area. “She talked about an hermitage with good hiking around it. Saint-Joan something I think,” I said, searching for the map.

“It’s Sant Joan del Codolar Hermitage and it’s not far. Looks like about nine kilometres down to Cornudella de Montsant and then three kilometres up into the Serra de Montsant Natural Park. The road has no number on it but it’s called Carrier de la Font.”

A road with no number—that should have been our first clue. It was so narrow that our little rented car touched the grasses on both sides of the road.

“What in heaven’s name will we do if we meet someone?” I asked.

“I don’t know. But there’s nowhere to turn around,” said Magellan.

Inching along, we came upon a hiker on foot and not much farther, a water tank with a small approach road. “Why don’t we just park here and walk the rest of the way? It can’t be far now.” I said.

Carrier de la Font road: where do you go when there's an oncoming car?

Dating back to the fifteenth century, Sant Joan del Codolar was built by Carthusian monks

Not knowing what to expect other than an old hermitage and a hiking trail or two, we were surprised to be greeted by two women eating their lunch in the sun-filled courtyard of the hermitage. And even more surprised to learn that one of them was the resident ermitaño. The other woman, her friend who visits once a year, spoke good English and seemed happy to translate our questions to the ermitaño.

Like “How old is this beautiful hermitage?” Carthusian monks built it at the end of fifteenth century.

“How long has your friend been here?” we asked.

Are you ready for this? Thirty-six years!

“How often is the hermitage open for services?” we asked. And heard that it’s every Sunday, or maybe we misunderstood and it’s one Sunday a year that worshippers brave that road.

The ermitaño takes care of the maintenance of Sant Joan del Codolar, its name meaning “hermitage between the big rocks.” We asked about her loneliness, especially during the cold winters. “No, she is never lonely. She has the mountains and much to do.”

When we asked about hiking, it became clear that after 36 years, she knew all the trails in the area.

Her advice was that it was too hot and too late in the day to attempt the hike we had our eyes on. Instead she suggested a shorter, easier path, mostly up through the forest, but with good views—one that would eventually lead us back to our car.

I asked about filling my water bottle. “Oh yes, the fountain in the back has the best water. Please, help yourself.”

As I wandered to the fountain, I wondered about the life of a hermit.

Haven’t we all thought what it would be like? Back in the third century, St. Paul of Thebes is said to be the first to retreat in to the life of a hermit, long before phrases like “so busy,” “need to escape,” and “too much social networking” put dreamy thoughts of simplicity and silence into our minds, promoted by savvy marketers for religious retreats, yoga retreats, meditation retreats, spa retreats… But to turn your entire life over to being a hermit, in the poetic prose of Thomas Merton, is something else.

To deliver oneself up, to hand oneself up, to hand oneself over, entrust oneself completely to the silence of a wide landscape of woods and hills, or sea, or desert, to sit still while the sun comes up over the land and fills its silences with light. To pray and work in the morning and to labor in meditation in the evening when night falls upon that land and when the silence fills itself with darkness and with stars. This is a true and special vocation. There are few who are willing to belong completely to such silence, to let it soak into their bones, to breathe nothing but silence, to feed on silence, and to turn the very substance of their life into a living and vigilant silence.

Returning to the courtyard, I said, “Today is my birthday and I’ve never met a hermit before. Would it be okay if my husband took a photo of the three of us?”

There was a quick discussion between the two of them. “She says she is not dressed well enough for a photo.”

“Tell her she looks lovely,” I said, thinking to myself that even women hermits fall under the hold of vanity’s long sway.

More chatter. Then laughter. “Okay, she says she’ll not be so proud and will just take off her bandana.”

“Can we see the photo?” they asked. From their conversation, we knew they were pleased with it. Then there was more chatter between them.

You can see how Sant Joan del Codolar Hermitage got its name, which translates into “hermitage between the big rocks”

“Will you wait here for a minute please she asks?” said the friend.

When the ermitaño returned, she offered us chocolate. “A little birthday present.“

The hike was just as she described, perfect. 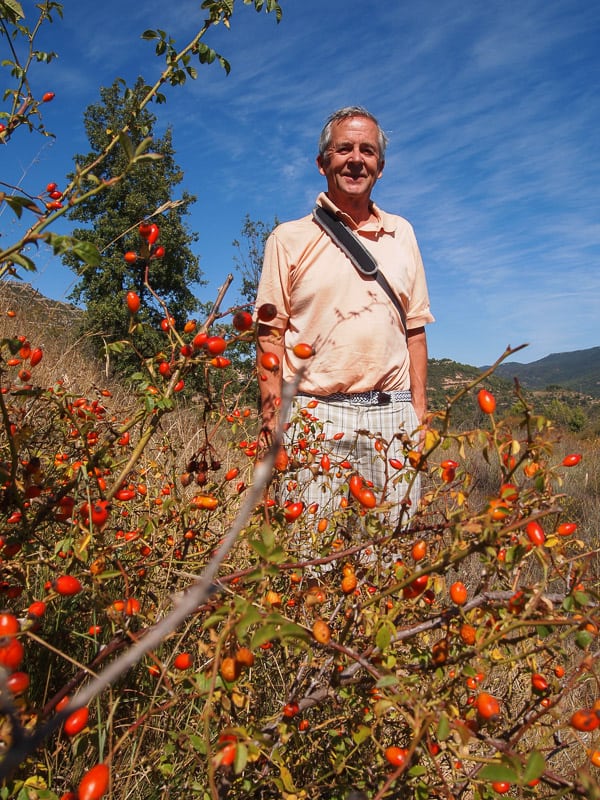 I thought about the many seasons the ermitaño would have walked this path, alone. About how lucky she was to have a good friend visiting her for a week, to not always be alone, for as Balzac said, “Solitude is fine but you need someone to tell that solitude is fine.”

Little did I know until writing this story, but there’s a website devoted to hermits.

Merton, Thomas Merton. Thoughts in Solitude. New York: Farrar Straus Giroux, 1956. Written by a Trappist monk who spent most of his life in a solitary existence and wrote more than forty books of poetry, essays and religious writing.