It was Ruth Ann’s idea for our annual holiday. “I want to go to Dawson City,” she said, quite firmly.

We settled on meeting there on June 7 and staying four nights. A few days after we reserved our Air North flights, Magellan said he was going to drive up, meet me on June 11 and then he and I were going to drive up to Tuktoyaktak. The elders shall have their way—and I’m grateful to them both.

Dawson City, a town actually, was declared a National Historic Site in 1992. “Jean Chrétien loved the north so that’s probably why,” Ruth Ann speculates. Only 2,000 people live there year round compared to the 50,000 who stampeded there during the Klondike Gold Rush when Dawson was the largest city north of Seattle and west of Winnipeg—albeit only for a few years before almost everyone left.

The photos I’d seen of Dawson City made me think Disney Does the Gold Rush. I was so wrong.

Never have I been so proud of Parks Canada, which manages three of Dawson’s eight National Historic Sites and operates one of the most helpful and attractive tourist offices we’ve ever seen, a visitor centre that attracts more than 113,000 people annually, mostly in the summer months.

It’s quite remarkable that such a small town maintains so many historic buildings and wooden boardwalks, offers such variety in accommodation and restaurants, and has so much to see that you need four days. What brought us under the spell of the Yukon was the frontier spirit of hard work, entrepreneurship and community that we found in so many of the people we met.

Like the man tending the garden at St Paul’s Anglican church, as he’s been doing for several years. And Freddie, a Parks Canada guide with a prodigious memory of Robert Service’s poems and vagabond life. Freddie joined us in the theatrical guise of William Ogilvie, the Yukon’s first commissioner, in the “Dawson Now and Then” tour conducted by Ona. She came to the Yukon from Quebec six years ago with $27 in her pocket and speaking little English. Now Ona is a Parks Canada guide who teaches silk-screening, plays hockey in the winter and lives off-grid in West Dawson. Then there was Jordan at the Dawson Museum, a blushing young man who likely hasn’t reached his twentieth birthday but gave us a superb behind-what’s-on-display tour, beginning and ending with mammoth tusks and sandwiched with stories about Belinda Mulrooney, once the richest gal in town who sold fine lingerie for six times what she paid for it, and the goodness and shenanigans of Frank Lowe the mortician. “Did the museum get a Canada Summer Jobs grant so you could work here like our granddaughter had at a museum in Vancouver last year?” I asked Jordan. “I graduated this year so it wasn’t available. But my boss figured out a way to get another grant so I could be employed here for the third summer. I love this place.” We commended him and his boss.

Locals rarely refer to street names, buildings are their waymarkers 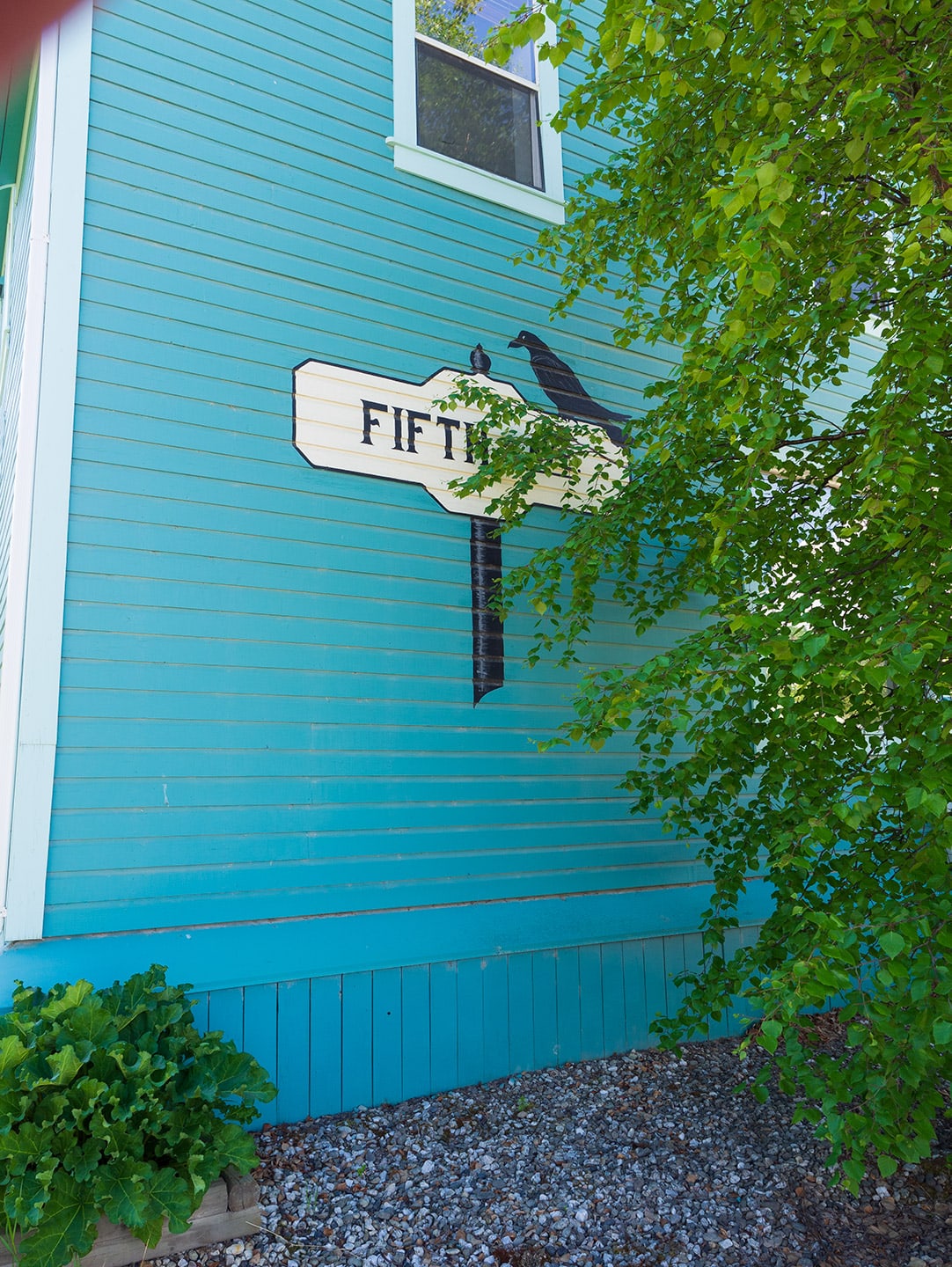 Because it's an historic site, the streets of Dawson cannot be paved

Incredible selection and service with prices no higher than in Vancouver

Since 1979, this three-day festival in July has attracted international attention

At the Dänojà Zho Cultural Centre, history of the first people of the Klondike, the Tr’ondëk Hwëch’in

We repeated this action a few days later after Sammy, a First Nations young man, guided us through the Dänojà Zho Cultural Centre. “He’s only eighteen,” said his boss when we told her how good the tour was, “but I predict he’s going to be the chief one day.” His ability to tell a story and interact with those of us on the tour was excellent. For example, he was telling us how well the Trondëk Hwëch’in had managed its money, essentially tripling it in twenty years. “Do they invest in local businesses?” I asked. He knew—under the Chief Issac umbrella of companies, they own local transportation businesses, they’re building much-needed housing and had just purchased the Monarch Hotel.

Alchemy in a latte

Ruth Ann and I ogled the gold jewellery that Leslie Chapman makes, as she explained, from nuggets mined at her family’s Forty-Mile Creek stake. We watched Florian Boulais do forty push-ups at his Alchemy Café on Sunday morning but unlike the customer attempting to get a free coffee by outlasting Florian, we pulled out our wallets, every day the café was open. We bought little books of Robert Service’s poetry from among the eclectic finds at Maximilian’s: there were first editions of Jack London’s Call of the Wild, long underwear, trade beads, cast-iron molds for mini cornbread, fishing equipment…from the owner who had all the time in the world to talk about his much-loved collection.

If we were younger...

Staying open is a problem for businesses in Dawson this summer. “We’re hiring” signs are stuck in many windows. Cheechako’s Bake Shop is closed on Saturday and Sunday because they can’t get staff. (Their rosemary olive oil bread and cinnamon buns are worth waiting for until Monday.) “I’m working three jobs and my husband just started his second one,” said our waitress at Aurora Restaurant. (I had wood-fired and smoked prime rib with Ruth Ann, ribs and baked beans the following Sunday with Magellan: delicious food.) The co-owner Tracy Nordick, also dances at Diamond Tooth Gertie’s. Tommie, the guide on the tour Ruth Ann and I took of the Dome, reappeared at a talk Magellan and I attended at Tombstone Territorial Park to tell us about the mammoths, tigers and giant beavers that once roamed this unglaciated area.

Sipping Yukon gin recommended by the whipper-snapper guy at the town’s liquor store), Ruth Ann and I were interrupted by a young woman planting flowers in the baskets on the doorstep of the cottage we rented at Bombay Peggy’s. “Didn’t we see you at Alchemy yesterday?” Ruth Ann asked her. Indeed we had and we could also spot her in costume at Parks Canada, too. She must have wondered who we were because when she arrived Ruth Ann was saying, “We tackled his face first and took out all the grass and mud. There was a large hole where his cheek should have been…” We were taking turns reading aloud from a book of stories that we found in our cottage: Medicine, Madams & Mounties, written by a doctor who practiced in the Yukon from 1933-1947. We didn’t quite finish the book, so both of us ordered it from our public libraries as soon as we got home. Amazing stories!

(BTW, Bombay Peggy’s isn’t named after gin, although I do recommend their Rosebud Martini. Peggy Duval, who ran this former speakeasy and bordello, had a suitor, a pilot in WW II who would fly to Dawson and drop gifts from the bomb-bay doors of his aircraft to woo Peggy.)

Tune in for Foxy and Folksy Hour with Andy Ladeau

"The Pit" at the Westminster Hotel, the locals' bar

Hurry up with those flapjacks will ya?

The law of Yukon

Cream cans for your butts

Never stumped for creativity in this town

Dawson has attracted the tour buses, daily excursions from Skagway are offered by the cruise lines. Ruth Ann and I were enjoying our lunch of fish and chips at Triple J’s, eavesdropping on the conversation among three guys (we dubbed the leader “Jimmy”) at a nearby table as they flagged the waitress for another pitcher of beer. A family of four sat down at the empty table across from us, Holland America lanyards bouncing around their necks. The youngest, the son in his early twenties, was exclaiming about the clean air up here, so breathable compared with Alabama. The three guys were getting louder. One of them asked Jimmy how many kilometres he’d driven from Winnipeg to come up here for his daughter’s wedding. “Did ya hear that?  Did ya hear that? He said kilometres!” exclaimed momma. “I told ya they didn’t do miles!” “Yeah,” said daddy, “things are different up here. Ya know they use metric. That ideer floated back home but the merchants said no way, they’d have to change their cash registers.” Sonny boy, who like his mom was unfailingly polite, was worrying aloud about where he could change some money. We told him there was a CIBC bank in town but didn’t know where, so he started checking his phone for its location. “I don’t know why we need to change our money but I guess we gotta,” said daddy.  “I can help you out,” offered Jimmy in the true spirit of the Yukon. “My tenants just paid me their rent and I’ve got a wallet full of cash. How much do you want? $100? My exchange rate will be better for you than the bank’s.” I couldn’t resist. “Hey, we can do better than that,” I piped up. “We’ll exchange your money at par.”

There is lightness and light in Dawson—lots of it actually—and I don’t just mean just the twenty-one hours a day of daylight in June. Shelby Jordan recently opened a butcherie & charcuterie. She’s busy year round supplying restaurants, catering to events and processing moose, reindeer and elk for local hunters. Three weeks before we arrived Shelby started opening her alley shop to the public for a few hours on weekday afternoons. In addition to her own tasty meats (try the coppa), she carries cheese from a local farm that’s brought into Dawson by boat. Feeling the need for a full-on shower, when Magellan and I returned to Dawson City from the Arctic we booked a cabin at Klondike Kate’s. Josee Savard, co-owner for the last thirty years, was busy cleaning cabins when we arrived. She’s sold the restaurant part of the business to a young chef and says the town is changing, that young people are moving in and taking ownership.

No matter what your age, you’ll likely have a good time in Dawson.

Brody, Richard. “The Secrets of Silent Film Footage Found in the Earth.” The New Yorker, June 15, 2017. Dawson at one time had three theatres showing silent movies, a perfect form of entertainment for the captive townsfolk during the long, dark winters. The motion picture studios soon realized there was no money in having their film reels shipped back to them. “Dawson City was so geographically isolated that it was the last stop on the film distribution line—meaning that films arrived late and screened late (sometimes by years). As the reels stacked up, many were burned in bonfires or chucked into the river,”  writes Christina Newland in The Guardian. But 533  “nitrate silents” from the 1910s and 1920s were wheelbarrowed into the permafrost behind Gertie’s where they sat until 1978 when they were unearthed by bulldozers preparing the ground for a new rec centre. Most of these silents were previously unknown to film scholars or thought to be lost. But the Yukon permafrost had safely protected them.

There is also a fascinating movie about this: “Dawson City: Frozen Time,” which won an award for the Best Short Documentary at the Cannes Film Festival. The shots form these silents are amazing and so is the info about Dawson City itself. Did you know 70,000 of the 100,000 people stampeding to Dawson in 1898 turned back? That each person on the way to Dawson was required, by law, to pack 200 pounds of provisions? That in 1900 the highest gold returns recorded in history came from Dawson: one million ounces. That Klondike Kate Rockwell had danced at The Savoy? That Fred Trump (grandpa to #45) had a brothel in Whitehorse to “mine the miners?” That the Carnegie’s built a library there in 1904? That in 1906 the Guggenheims bought up the mines and introduced dredging? Some cold winter night, curl up and take yourself back in time to another historical goldmine.

The Youngest Watchwoman on Haida Gwaii

Yukon 2: On Track
Scroll to top