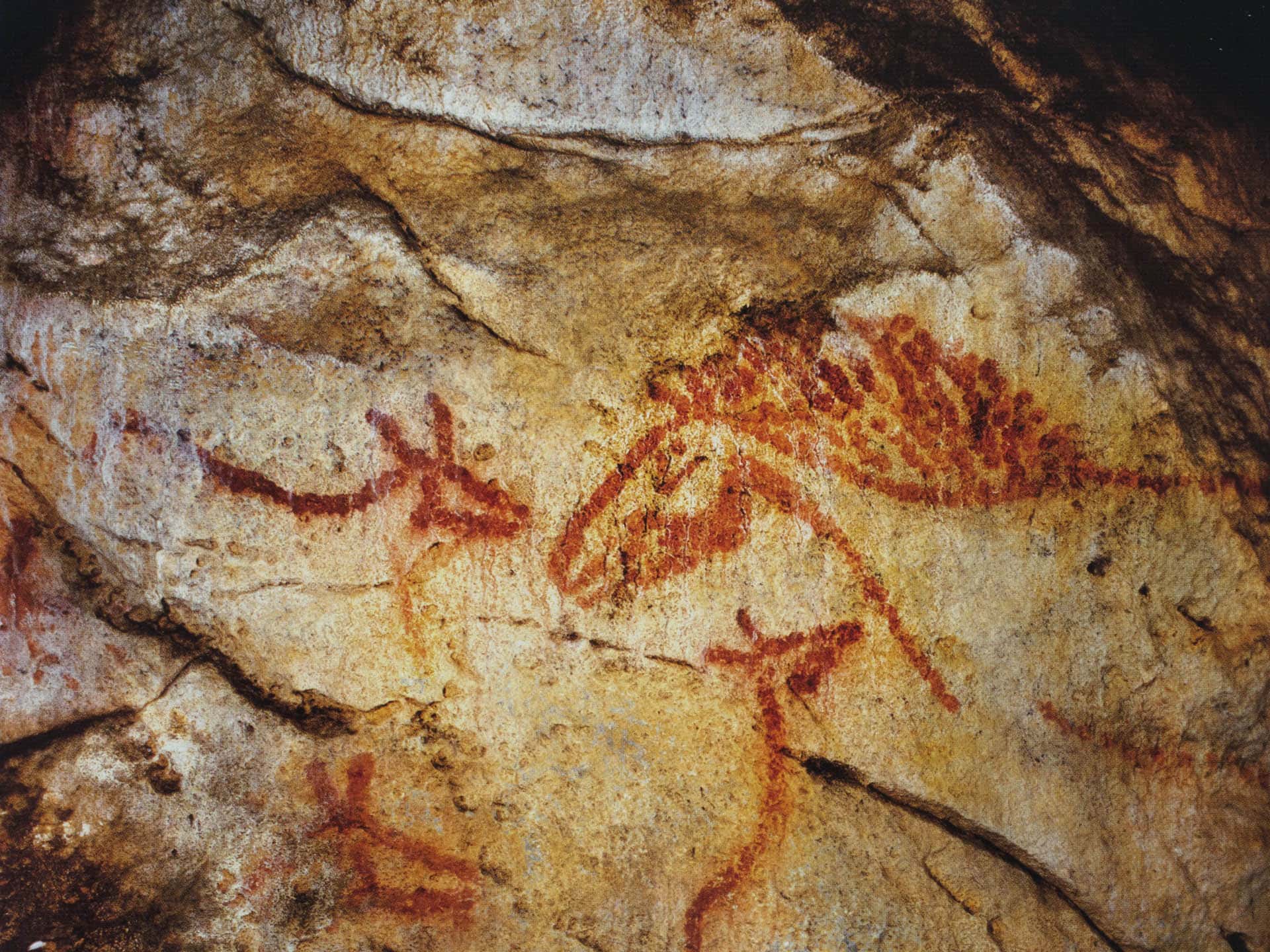 We’ve all seen our share of profound art. But being in a cave in semi-darkness among drawings created 24,000 years ago, astonished our perception of time and human achievement.

My travel notes said: “Covalanas Cave, a 10-minute drive away, is the most ancient in Northern Spain. You can see the original prehistoric paintings. (reservation required).”

I’d ignored the parenthesized copy. Had we known that Covalanas cave was declared a UNESCO World Heritage Site in 1986, we’d have realized the need to book in advance.

After dinner we told John, our host at hotel Aire de la Ruesga, that we planned to see Covalanas cave the next day. He asked if we’d made reservations. “I don’t think you’ll be able to get in. They only take eight people per tour and there aren’t that many tours per day.  But let me see what I can do for you.”

We arrived for our 11:40 tour a bit breathless from hurrying up the 700 metre climb from the parking area to the little check-in booth where the previous group was buying books and brochures, available, alas, in Spanish only.

We were joined by a younger couple (well aren’t they all?) from Spain. Naturally, the tour was given in Spanish. By the most enthusiastic guide we’ve ever encountered; clearly a man who wholly revered the art, despite, presumably, his years at the job.

The Calera River valley in the Cantabrian Mountains is plush-green. You can see why the Gravettian and early Solutrean people made their homes in these limestone rock shelters and caves  as far back as 43,000 BC.

The Gravettian and early Solutrean people chose an ideal landscape

With this rugged landscape, it's easy to see why the Covalanas cave remained undiscovered for millennia and wasn't surveyed until 1903

A Paleolithic home near the cave

Covalanas cave is on the northeastern slope of Monte Pando over the El Mirón cavity. Originally, you had to enter the cave on all fours. It wasn’t surveyed until 1903, and it took another 50 years for Covalanas to be opened to the public, at which time the entrance was lowered for easier access.

After an introduction, specifying that we could not take photos and encouraging us to leave our cameras locked in the booth, our guide opened the green gate and led us down into the first room, small, about the size of our bedroom at home. He gave each couple a torch, instructing us to use it sparingly to see our way into the two galleries (the Gallery of Music and the Gallery of Paints) and kindly telling us to aim it at the art only when he gave the okay. Responsible tourism.

One reason the art is still visible and not blackened by fires is that Covalanas cave was never inhabited. It was a spiritual place, perhaps for worshipping the animals that sustained human life, or maybe a prehistoric art gallery, public or private.

It’s enticing. You don’t see any art until you’re about 65 meters into the cave and then it’s only two small series of dots. Suddenly, the shock of awe hits you in the Gallery of Music. Animals, outlined in a consistent iron-oxide red and concentrated in a clearly demarcated area, occupy the major part of the 30 metre wall on both sides of the gallery. From the shadows in the Gallery of Paints where the walls are twice the length of those in the previous gallery, our guide’s torch revealed more large animal figures. Just as in galleries today, the artwork has been carefully “hung.”

The anatomical structures—the nose, the eye, the mouth and nasal relief and the girth—are rendered with amazing skill

Isn't the mane of the caballo incredible? The figure is about 20-by-30 cm 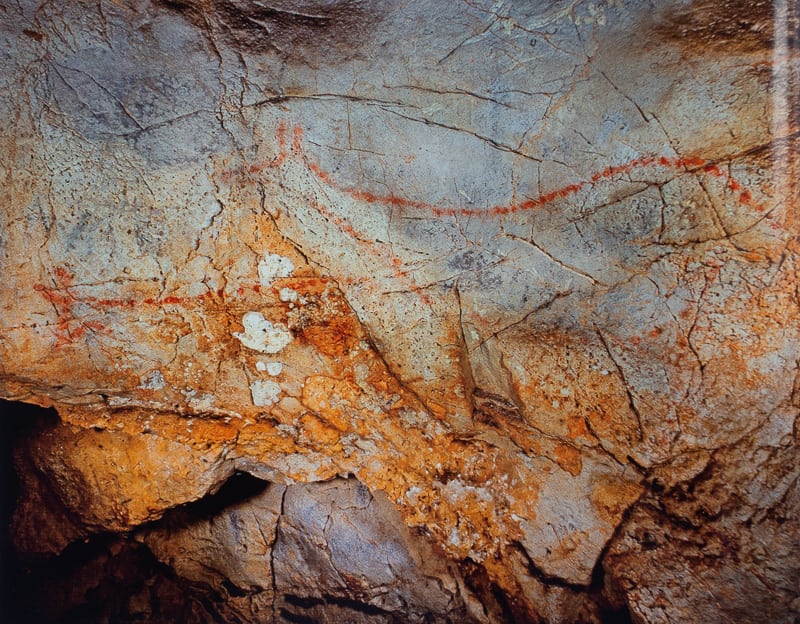 Imagine the planning the artist did for these art galleries

The artist drew the animals with his or her fingertips, a dot technique called stippling

Here's a good example of how the artist took advantage of the natural curvature of the cave's limestone, using it to represent the bull's belly and aligning its upper hindquarters with the cave's edge

The artist carefully planned the position of the animals for maximum viewing effect, which our guide made obvious when he waved his flashlight to emulate how it would appear in the flickering light of a bone-marrow rock lamp

The artist didn't give eyes to all of the animals (and in one case, used a hole in the cave for an eye) but you can see that the lower deer is on red-eye alert

As you walk in, you go to the left following the animals, which are all facing inward, and on the way out you walk on the right where the herd is facing outward: a circular gallery tour. Here though, the left side of the cave splits into two walls forming an oval-shaped dome, where the hinds circulate the walls

In total, the two galleries contain twenty-three animal figures: eighteen hinds (deer-like animals, some with ears tuned for danger, others more placid), a stag, a horse (the artistry of its thick mane takes your breath away), an auroch (the ancestor of domestic cattle and bison), a hybrid-type figure and rectangular symbols, dotted lines and other motifs.

By making effective use of the undulations, angles and contours in the limestone walls to represent ribs and bellies and horns, the artist has made the animals appear three-dimensional.

Careful positioning of the hinds creates an incredible sense of movement of the herd. You want to follow them.

And the perspective: what’s most amazing is the perspective. In one place, a deer is looking back over its shoulder! That’s a perspective, as our guide pointed out, that wasn’t seen again until the Renaissance.

The artist’s technique was equally fascinating. This is finger painting (well thumb painting, actually) at its finest. With one hand, the painter made a series of small thumb dots to create stippled outlines, which were then partially or totally washed with colour. (There’s no sign of colour fading—getting the formula right for binding iron oxide with animal fat, by accident or testing, is mind-boggling.) In his or her other hand, the artist (or an assistant) held a rock hollowed out to function as a lamp; its fuel was animal bone marrow.

Because of the consistency and homogeneity of the art, it’s believed this was the work of a single painter. On our way out, our guide pointed out further proof of this, the artist’s signature: two thumb prints at the entrance to the gallery.

This style of painting is prevalent in other caves up to a hundred kilometres away, indicative of social contact that led to a certain fashion in art back then, like the spread of Impressionism in the early twentieth century or Pop Art in the ‘60s.

Among Cantabrian caves with prehistoric artwork, Covalanas is superseded only by the world-famous Altamira, which Magellan and I visited a few days later, a grand experience. But nothing like Covalanas. Unless you’re a high-powered art scholar or anthropologist, you can no longer visit the Altamira cave. Although its replica is extremely well done. But the intimate experience of five people underground, exploring original, Paleolithic art in a shadowed cave, still gives me frisson when the word Covalanas, for which there is no translation, is spoken. As Einstein said, “The most beautiful emotion we can experience is the mystical. It is the power of all true art and science. “

We liked the hotel we’d chosen, Aire de la Regusa, the big stone house next to the church in the village of Mentera.

Arrive early to the Covalanas cave site because it’s a steep, 700 metre walk straight uphill from the parking area to the entrance and the 45-minute tour is punctual. And reserve a few weeks in advance in high season.

Garcia, Marcos, Angulo Javier, Eguizabal Joaquin. Photos by Pedro Saura.Conoce Covalanas. Gobierno de Cantabria. There’s no publication date on this book we bought from which all of the animal photos and sketches in today’s blog were taken.

On the Pollen Path
2 replies