El Bulli. Perhaps the world’s most famous restaurant. When Ferran Adrià closed its doors in 2011, El Bulli had been named the #1 restaurant in the world five times—a record.

But what happens to the team—like when you’re chef de cuisine at the world’s best restaurant—and it closes?

Ferran’s last three chefs de cuisine didn’t move far. They opened Compartir eight kilometres down the coast from El Bulli in the picturesque seaside town of Cadaqués. The alumni trio, Mateu Casañas, Oriol Castro and Eduard Xatruch, had worked together at El Bulli from the time they were teenagers. They chose their new location because a former customer of El Bulli kept saying, “You have to make a restaurant at my house.” You might remember us talking about Cadaqués. It’s near Salvador Dali’s home, which we blogged about in Port Lligat: A Little White Love Story.

You know me. Long before we left Canada, I’d made a 1 pm reservation at Compartir to follow our tour of Dali’s house. Earlier that September morning, we’d left Barcelona and driven the 175 kilometre “puke road” to Cadaqués, walked to Dali’s house at Port Lligat, had a delightful one-hour tour, and wandered back to, and around, the town. It was a cold, blustery day. Magellan and I had heads full of art but we needed an installation—of food.

Island-like, Cadaqués is centred between Cape Norfeu and Cape Creus and flanked by low mountains. At first, we walked right by Compartir, partly because it’s in an unpretentious 300-year-old house up the hill in the centre of town away from the sea. And the door was closed; it hadn’t yet opened for lunch.

“No thanks, we don’t want to sit outside,” we said when it opened, walking through the large courtyard to one of the casual, relaxed dining rooms inside, rubbing our hands together to warm up. (I can’t believe I was wearing shorts.)

Grey walls of stone and the lavish use of azul intenso in Compartir’s décor match the rugged landscape around Cadaqués, contributing to a warm intimacy emanating from the restaurant’s heritage as a family home.

In the Catalan language, Compartir means to share. A well-chosen name because you feel like you’re sharing a lunch in the home of a chef friend cooking from the bounty of her own garden. In an interview with Eater, Eduard, explains their concept.

Mateo, Oriol, and me, we worked for more than 15 years together at El Bulli… but we have always had the illusion to make our own restaurant… Here in Compartir we [wanted to] make a restaurant that is for everybody. We make cuisine with creativity, but it’s not haute cuisine. It’s more informal, it’s an informal ambiance, the waiters are very friendly. And people are very relaxed, and they can enjoy Cadaqués and of course, the meal.

In the book about Ferran that Lynn bought me, Oriol says he likes foods “tasted” by aroma.

You must respond emotionally to food. When I smell mushrooms, I smell the country, the cellar of my grandparents. It’s memory-emotion.

My memory-emotion of Compartir? The fragrance of field-ripened strawberries, the steaming pot of seafood and rice redolent of the sea, the glistening pearl-like globes of chocolate, waiters who spoke perfect English—a feeling of sublime relaxation.

Here’s what Magellan and I shared. 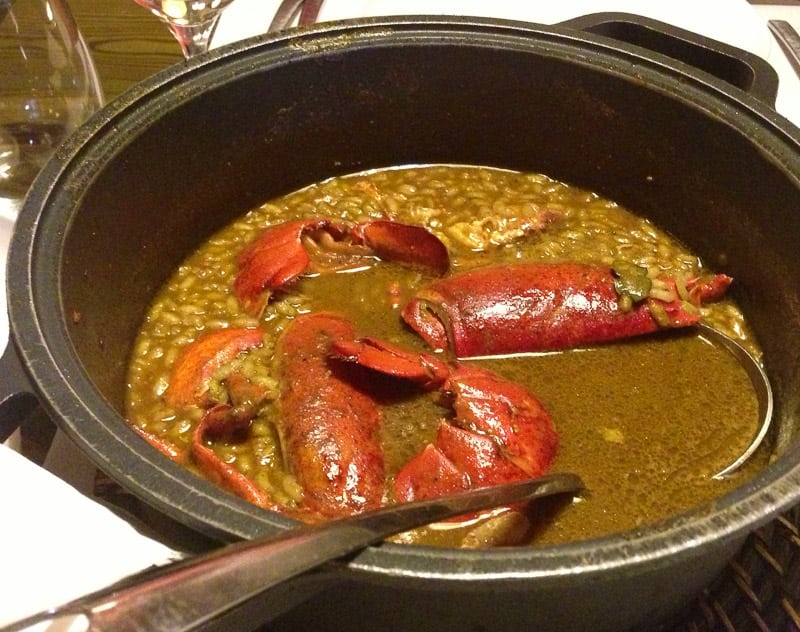 A blend of Red Lledoner, Tempranillo and Cabernet Sauvignon—don't you love the label?

The following September, we shared the Compartir experience again, this time with Gail and Sue. The tour guide at Dali’s house wasn’t nearly as good but Compartir redeemed my travel cred.

I almost forgot to tell you about the first thing you receive—a free cocktail! 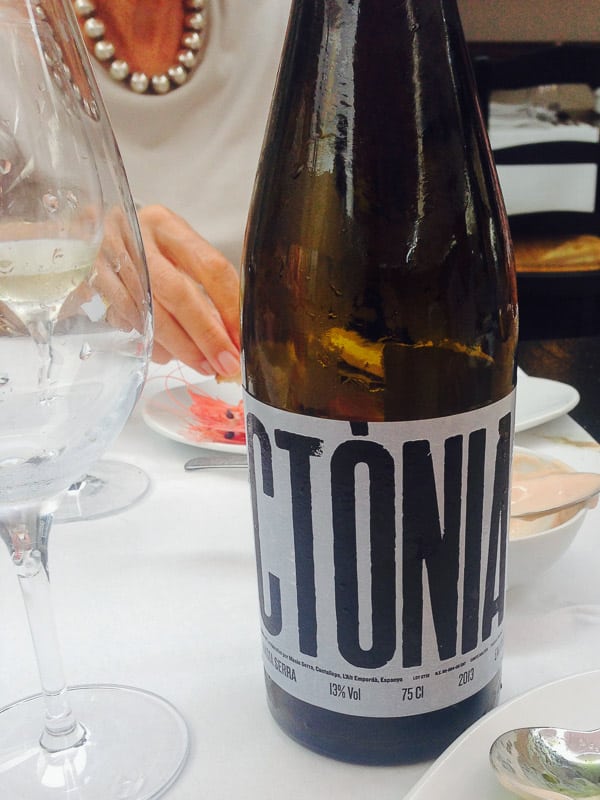 A marriage of land and sea: potatoes and octopus

No, we didn’t go the next September. But our friend Marsha and her golf pals lunched at Compartir this spring. “Compartir is the restaurant I think of first when I tell people about my month in Spain,” says Marsha. “The food, presentation and service were excellent and a perfect complement to the day after touring Salvador Dali’s home.” Looking at Marsha’s photos, you can see the increasing sophistication and creativity of the food. 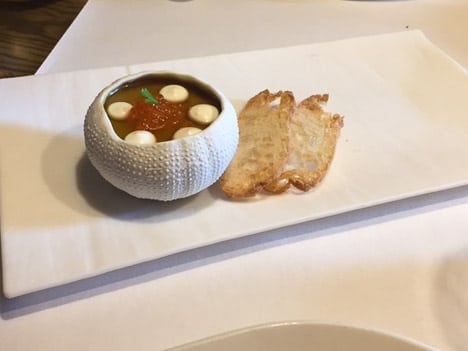 Eduard explained the changes in Eater. “We started with a menu that was quite interesting, but with the team, little by little, day by day, we try to be better.” (Doesn’t this sound like Rafa?) Eduard goes on:

For example, on first courses, we had a salad of beetroot with a glass of almonds; now, we make a salad with beetroot, strawberries, pineapples, but we make a differentiation with this glass of almonds, garlic, and balsamic. Another example is a salad we make with endives, raw endives and cooked endives. Cold and hot endives with gorgonzola foam, crispy crostini of passionfruit, and walnuts. So, the flavors are all traditional, but in the presentation, the texture, and temperature is different. That’s why the customers like our dishes; because the taste you recognize, but in texture and in presentation it’s different.

Mateo, Oriol and Eduard continue to get even better. “We had three families to feed and one restaurant wasn’t enough to live off!” Eduard told Eater. With the trio’s second restaurant, Disfrutar (it means to enjoy and is in Barcelona), their return to gastronomic cooking has catapulted them to the quarter-finals in the Grand Slams of the restaurant world: a Michelin star in their first year and a #51 ranking on The World’s 50 Best Restaurants in 2017. You gotta love those Spaniards.

Andrews, Colman. FERRAN The Inside Story of El Bulli and the Man who Reinvented Food. New York: Gotham Books, 2010.

Here’s the article from Eater about Compartir’s first year in business.

Do I love serendipity? Let me count the ways. While writing this story, I took a break and went down for the mail, not much these days. But there was Food & Wine’s September 2017 issue, devoted entirely to Spain, with an article about the legacy of El Bulli, “The Descendants.” Lisa Abend’s description of the whiskey cake at Disfrutar that “began with the server spritzing my hands with Scotch” will inspire my winter desserts!

Still Life in “The Heart of the Death Coast”