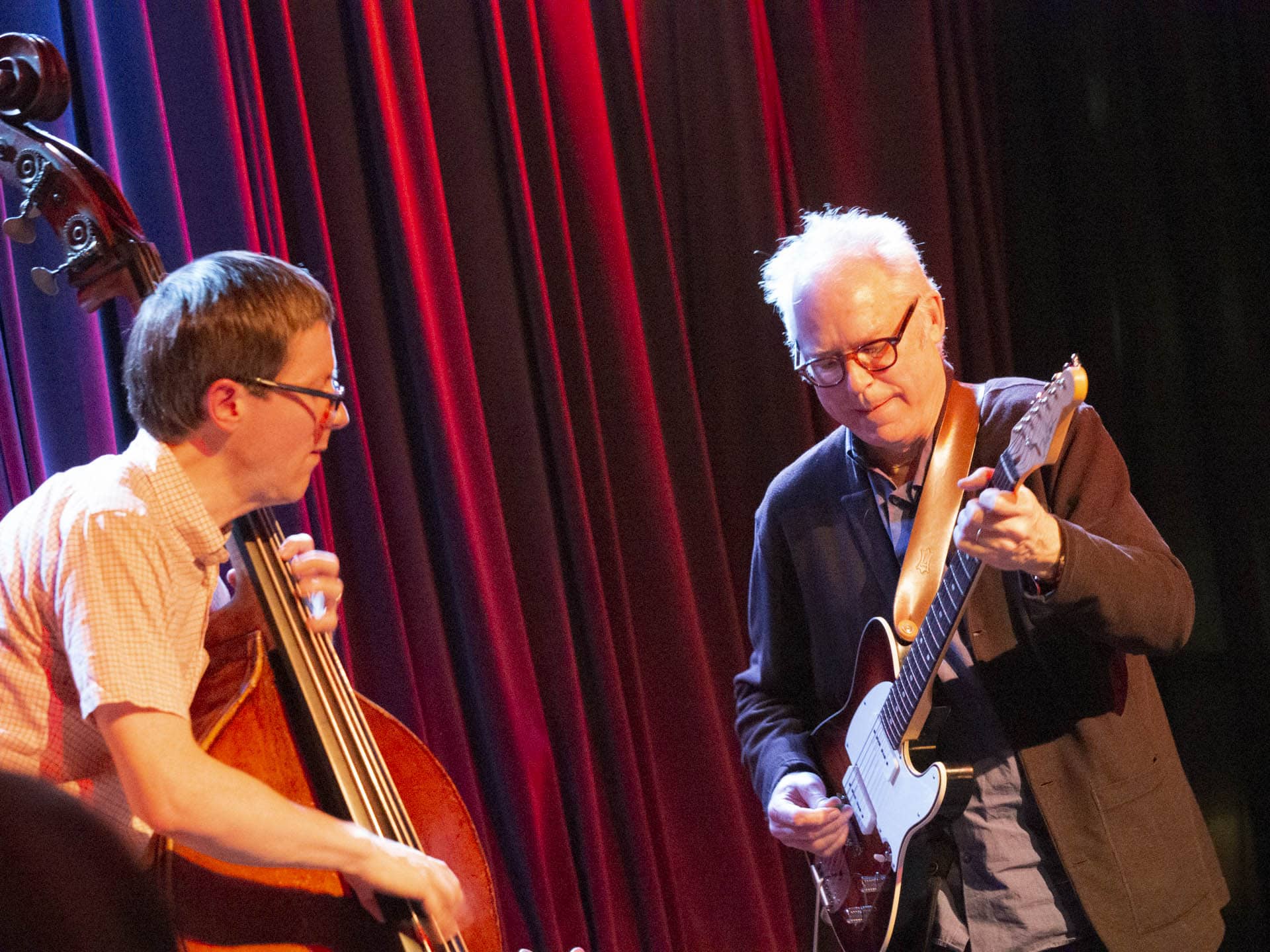 From The New Yorker: "Frisell is a guitarist whose minimalist aesthetic colors each carefully chosen note he plays, and he can coat a room in mysterious yet strangely warming tones."

From The New Yorker: “Frisell is a guitarist whose minimalist aesthetic colors each carefully chosen note he plays, and he can coat a room in mysterious yet strangely warming tones.”

Have you ever dreamt of painting music?

A Bill Frisell concert can do that to you.

It happened to me last month after hearing Bill and Thomas Morgan play at Dimitriou’s Jazz Alley in Seattle.

Do you know the music of this multiple-times winner of Jazz Guitarist of the Year? Neither Magellan nor I have studied music so let’s hear what those in the know say about Bill Frisell.

Warm, fluid, generous, humanistic, transformational, redemptive… halting reverence… a dream of a musical democracy in which all music, no matter where it comes from, is rendered gorgeously and benignly and heartbreakingly and hauntingly dreamlike. GQ Magazine, Tom Junod

Mixing rock and country with jazz and blues, he’s found what connects them: improvisation and a sense of play. Unlike other pasticists, who tend to duck passion, Mr. Frisell plays up the pleasure in the music and also takes on another often-avoided subject, tenderness. His fluidity, his whimsy, his sly mastery of timbre and color… Like a lot of introverts drawn to improvisation he creates a feeling of floating time… The New York Times

He deploys a distortion pedal and a fuzztone device, two delays, a reverb, and several small music boxes that he attaches to his guitar pickups—within the flow to trigger random elements within a performance, and his ability to work those sounds seamlessly into the warp and woof of his improvisations is a quality that continually astounds the people who hear him most. Ted Panken

Across four decades of original composition, technical vision and jazz-improv audacity, the quiet Seattle maestro has become the Jimi Hendrix of contemporary music’s quirkier forms, revolutionising the palette of the electric guitar… The Guardian

I think the first music by Bill Frisell that Magellan and I heard was Poem for Eva from his 1999 CD “Good Dog, Happy Man.” Current Faves, Saskatchewan 2015, Palm Springs 1—Bill’s music is probably on all of our playlists.

“Before I leave this earth I want to hear Bill Frisell in concert at least one more time” is a refrain Magellan’s heard  from me for four years, since the last time we saw Bill play in Vancouver. Although Bill lives on Bainbridge Island near Seattle, he’s become so famous you have a better chance of seeing him in New York, or Oslo, or Sydney.

John Dimitriou opened Dimitriou's Jazz Alley in the University District in 1979, moving downtown to 6th & Lenora in 1986—in 2016, DownBeat Magazine voted Jazz Alley one of the top 100 jazz clubs in the world

I emailed John about this mural. It was painted by his wife Carla around 1991. John writes, "The band “Joe Banana and the Bunch” (a group with a peal) was a lounge band I played in the late 60s. We, or rather I, was terrible as a drummer but had a great time. Carla used some of the artists we worked with over the years and also included a picture of our first dog Miles, which our corporation is named after. The mural is due for a touch up but so many people have had their pictures taken in front of them we are a little hesitant to do too much." 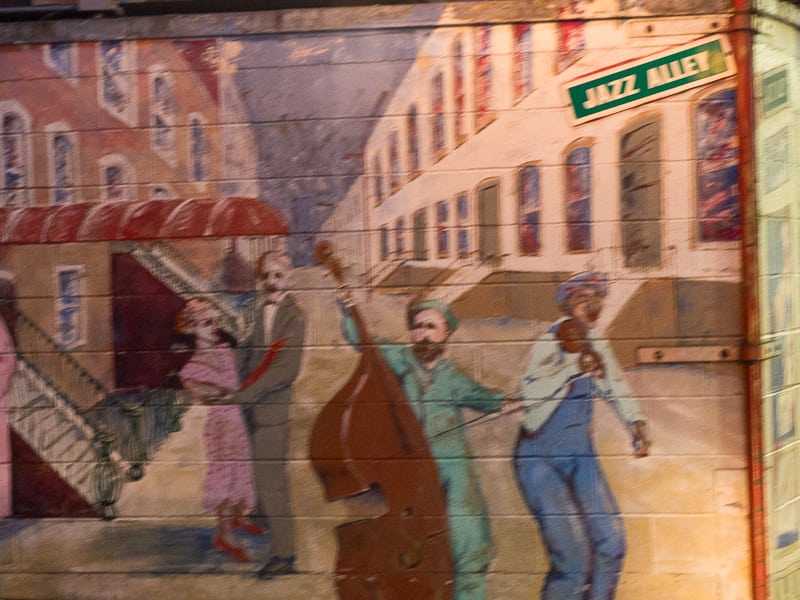 Dimitriou’s Jazz Alley is the third-longest-running jazz restaurant and nightclub in the country, after Blues Alley in Washington D.C. and The Village Vanguard in New York

You can just tell as you watch Bill play in his casual outfit—brown dungarees and a midnight-blue shirt topped with a loose-fitting cardigan-like jacket tonight instead of his usual flannel shirt—as he adjusts his round-rimmed glasses, tucks in his lower lip as he concentrates on his fingering and breaks into a heartfelt you-got-it smile at Thomas 16 minutes later at the end of the first song, that he is, as he has so often been described, “that very rare genius who’s a lovely guy.” I couldn’t see his socks, but he’s renowned for wearing ones with quirky colours and patterns. Thomas, young and thin, bespectacled in dark frames and dressed in a plaid shirt and blue slacks, drapes his body over the bass. (When the show is over and two other fans and I are standing by him in the washroom line-up, I strike up my nerve and say, “Do you mind me asking how old you are?” and Thomas replies, “Thirty-six.” And he’s been playing with Bill for ten years!) The audience is so quiet that when a waiter grinds pepper onto pasta two tables away,  we can count the number of turns of the mill. After one of the songs—maybe Wildwood Flower (“a merry bit of front-porch fretwork”) and definitely before Goldfinger, I write in my little yellow Moleskin: “iridescence of light in the guitar strings, like liquid sunshine—topaz and amber and gold in the sound, bass like caramel.”

After 90 minutes, Bill and Thomas bow. What All About Jazz says is so true: “It’s in the more naked, completely vulnerable environs of the duo—where the need for musical trust is, perhaps, at its most crucial—that the profound chemistry shared by these two thoroughly synchronized players becomes even clearer.” Bill gives Thomas a hug and at the microphone speaks his only words of the night, “Thank you. I really should let Thomas do the talking. Instead, we’ll play one more song,” and with that they swing into Burt Bacharach’s What the World Needs Now.

The duo began recording together in 2011 on Paul Motian’s highly acclaimed The Windmills of Your Mind and went on to Frisell’s Grammy-nominated When You Wish Upon a Star in 2016 and a year later Small Town, recorded live at the Village Vanguard

“Thomas has this way of time-traveling, as if he sees ahead of the music and sorts it all out before he plays a note," Bill Frisell tells John Kelman in All About Jazz

Walking back to the hotel, the cold air in downtown Seattle felt more fresh, the number of homeless people seemed fewer, the diversity of the architecture more pronounced, the LED lights of the Ferris wheel deeper, brighter.

(Now before I share my dream of painting the concert, Magellan says I have to tell you that we went up to The Nest, where I drank the best cocktail of my life, “Craven:” an ensemble of Don Julio Reposado playing with Del Maguey Vida Mezcal and orgeat and coloured with Campari and lemon.)

In my dream, a small group of those of us who’d been to see Bill Frisell were ushered into in a back room at Jazz Alley to paint our interpretation of the concert. We were given a selection of watercolours, oil paints and rectangular sheets of art paper—but no brushes; the work had to be created with our bare hands. I made a triptych. The first part was a watercolour smear of bright yellow—xanthous, the yellow of an egg yolk, with a few random vertical streaks of thin yellow paint, the piece thinly bordered in cobalt paint. The next two parts of the triptych had a similar style but were borderless, the vivid yellows intensified, becoming a brilliant topaz in the final piece of the triptych. I woke up in the middle of the night feeling like a happy kindergartener exclaiming, “Look at this, look at this.” Wisely, Magellan says, I waited until morning to share the experience.

Bill Frisell fans, about 300 of us

Xanthous, the yellow of the first painting in my dream triptych

The colours of Bill Frisell's music in my dream art

Real artists’ backgrounds I find fascinating. Born in 1951 in Baltimore, Bill has that southern-gentleman manner. The family soon moved to Denver, where his dad worked as a biochemist. When he was about four years old, Bill built his own guitar from cardboard and rubber bands after seeing a guitarist on The Mickey Mouse Club show. He graduated to Fenders and Gibsons, majoring in music at the University of Northern Colorado before moving on to Boston’s Berklee College of Music, where he studied with the revered Jim Hall, who used visual terms like “painter” and “colorist” to describe Bill’s playing. The Big Apple offers the best opportunities for young artists, right? Bill’s wife, the painter Carole D”Inverno, encouraged the move, which they made in 1979. Carole rolled sausage dough in a pastry factory for $2.90 an hour and Bill played at gigs where the covers were sometimes a whopping 99 cents. His big break came in the early 1980s when Bill subbed for Pat Metheny in an ECM recording session, but meeting and playing with Paul Motian was the north-star point for his career. At the end of the 80s, Bill and Carole moved to Seattle. (Like us they have an only, a daughter.) As his playing evolved, Bill recorded a whole bunch of CDs, collaborated with musicians across many genres, worked on film and television soundtracks (he created the music for his friend Gary Larson’s TV series of “The Far Side”) and played in concerts worldwide, often in a trio with Tony Scherr on bass and Kenny Wollesen on drums. His upcoming schedule—33 gigs over the next three months!

At home on Bainbridge Island with his guitars
(Photo: Monica Frisell, Bill and Carole's daughter)

About six years in Vermont, Bill bought a talking moose for $5.00, cheap because the farmer selling hated the lies the moose told: that it had invented Velcro, played sax with Charlie Parker, had an affair with Marilyn Monroe...It became a totem at Bill’s concerts and since then, fans have been sending moose to Bill

Artist Jim Wall, whose art Bill says "is a lot closer to what I'm trying to do with the music than a lot of musicians I know" designed this cover for Bill's Beautiful Dreamers CD
(Photo: SFJazzBlog)

Today is Bill Frisell’s 67th birthday and to celebrate, he’s playing at New York’s Village Vanguard. On March 18 four years ago, Ted Panken posted an insightful article honouring this legendary jazz artist. In that birthday tribute, Bill said that Jim Woodring’s art is the closest thing to what he’s trying to do with his music:

It’s the place you’re trying to get to—to bring something to the surface that’s not always visible or audible, something people feel in this reality that isn’t always there… For me, playing is as close as you can get to another human being.

You know how I’m going to end this don’t you? Before I leave this earth I want to hear Bill Frisell in concert—at least once more.

Additional Photo Credits: Xanthous is from FashionRework and topaz is from AfricaGems.

What Happened at Mesa Verde?