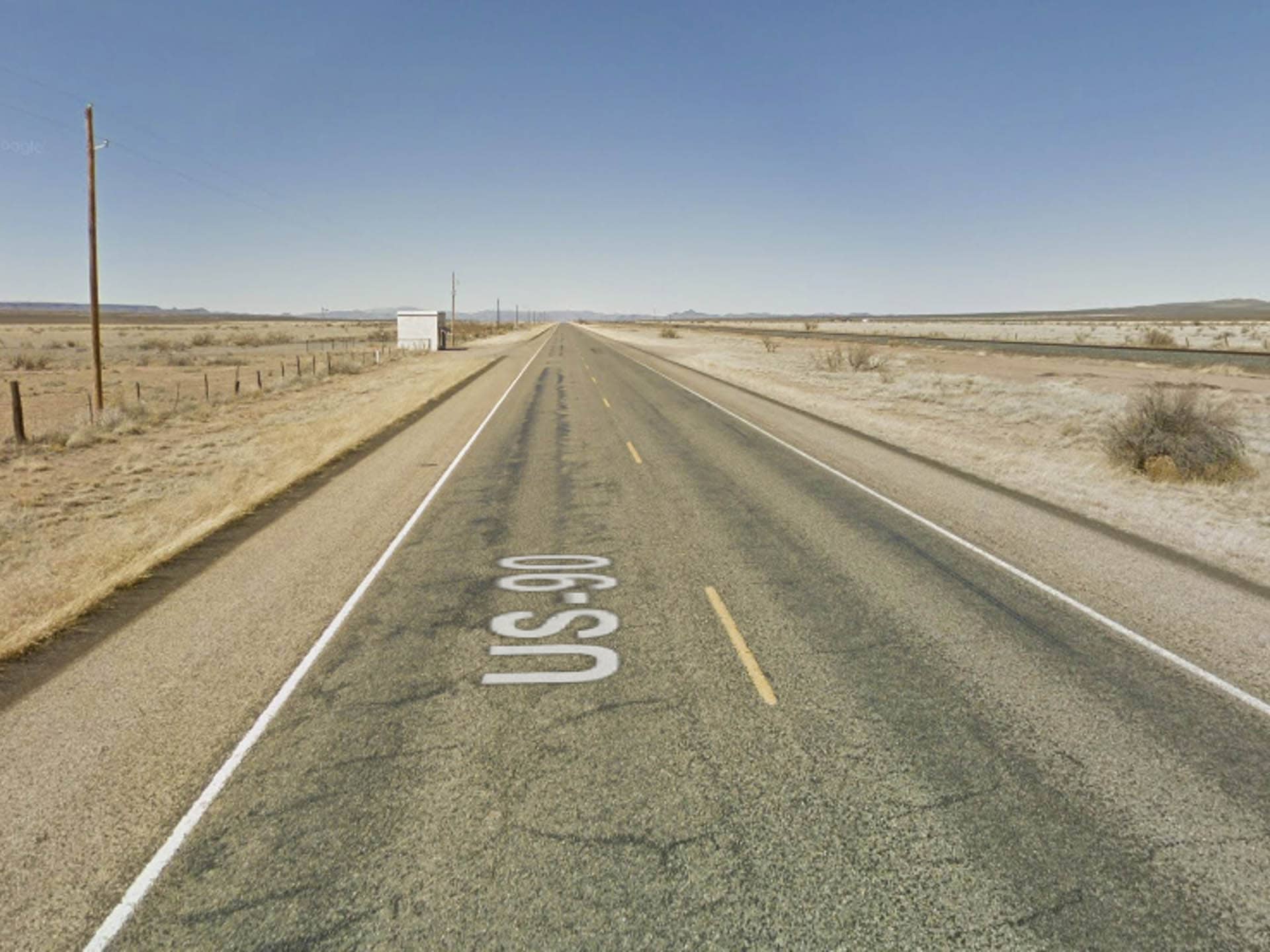 In the Chihuahua Desert the light is intense, the silence severe. The landscape planes, stretches horizontal, on, and on, and on, into a thin horizon line penciled above the empty plains. El Despoblado, The Uninhabited, is the name of the distant hills. Having left the small town of Marfa in West Texas, we’d driven thirty-six miles to see Prada Marfa, which sits, alone, unsigned, off US Highway 90.

Out here on a Monday morning on the empty road, we drove right past it. Prada Marfa is an outlier not an outlet. There’s no shopping for the shoes and handbags displayed in its windows. Prada Marfa is art, a hermetic sculpture, an artifice with a door designed to never open, a luxury emporium forever empty of customers. Created in 2005, it’s garnered so much attention that last year when Phaidon published Destination Art, Prada Marfa was named among 500 artworks in the world that are worth a special trip.

How did this iconic artwork end up on this lonely stretch of road?

The story begins in Marfa.

For years I’d wanted to go to the town whose name is synonymous with the artist Donald Judd and his site-specific minimalist sculptures. Judd believed experiencing artwork in a specific space was as important as the artwork itself. So in the 1970s he began acquiring property in which to display his art in perpetuity in Marfa, which at the time was almost abandoned. Judd moved there permanently by the end of the decade and went on to found the Chinati Foundation, a modern art legacy of permanent spaces for his artwork and that of like-minded sculptors and installation artists. The town became an art destination—I think we first read about it in a travel magazine in the 90s. But Marfa is small, with a population even now of only 2,000 people. And remote, three hours from the nearest airport.

One day in 2002 girlfriends Virginia Lebermann and Fairfax Dorn, who had both grown up in Texas, drove out to Marfa. (BTW, Virginia is now married to Rocky Barnett, the chef we wrote about in Rocky’s Corn.) Like Judd, the two saw the open desert as a space for art.

A year later with a little seed money from Virginia’s family, they converted a 1927 dancehall into Ballroom Marfa, a non-profit organization and cultural arts space. Its mission is to support the work of artists and curators on projects that have “significant cultural impact but would be impossible to realize in a traditional gallery or museum setting.”

In conjunction with Art Production Fund, the Foundation commissioned the artists Michael Elmgreen and Ingar Dragset to create its first big project, Prada Marfa, which opened in 2005. The Norwegian-Danish duo designed the fifteen-foot-wide building that fakes a Prada boutique and displays stilettos and purses from the designer’s Fall 2005 collection. It’s being left to degrade in the desert, a commentary on the emptiness of our obsession with brand names—in fashion, art and architecture. 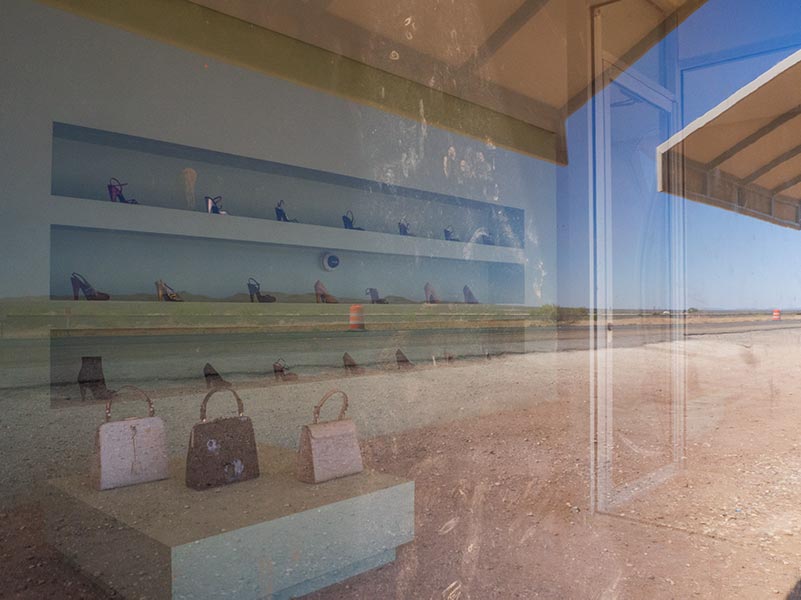 Prada Marfa looks so out of place, like it doesn’t belong, like high heels at a cattle sale. “It makes a pretty strong social statement,” said Magellan as we walked toward it, “a symbol of excess on the immigration path of destitute people.”

Fabricated from traditional adobe, dirt mixed with water and straw and left to dry and harden in the sun, Prada Marfa pays tribute to the dwellings of the Jumanos, the original people in this area—which is the oldest inhabited region in the United States. Its minimalist design mirrors Judd’s sculptures and Marfa’s empty storefronts.

Magellan and I peered in the dust-scratched plexiglass windows. Dust the colour of chinos has seeped in and settled on the floor. The walls are painted pistachio green, matching the interior colour of Prada boutiques around the world, but the desert sun has faded its lustre, like the temporal relevance of fashion. 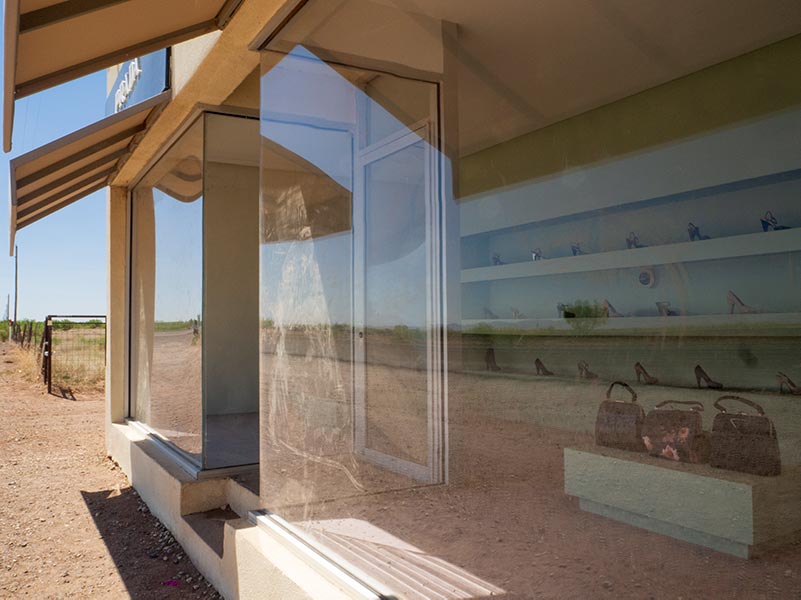 I wondered how Miuccia Prada felt about the land-art sculpture that bears her name.

About the time Donald Judd moved to Marfa, over in Milan, Miuccia Prada took over her family’s luggage business. As you probably know, since then she and her husband have turned their leather-goods business into a global fashion brand (she’s called “the oracle of fashion on the state of the world”) with annual sales around $5 billion in Canadian dollars. A Prada handbag will empty your bank account of $3,000, a pair of classic pumps about a third of that. Turns out she gave the artists her whole-hearted approval for Prada Marfa and even selected the six handbags and fourteen right-footed shoes on display. 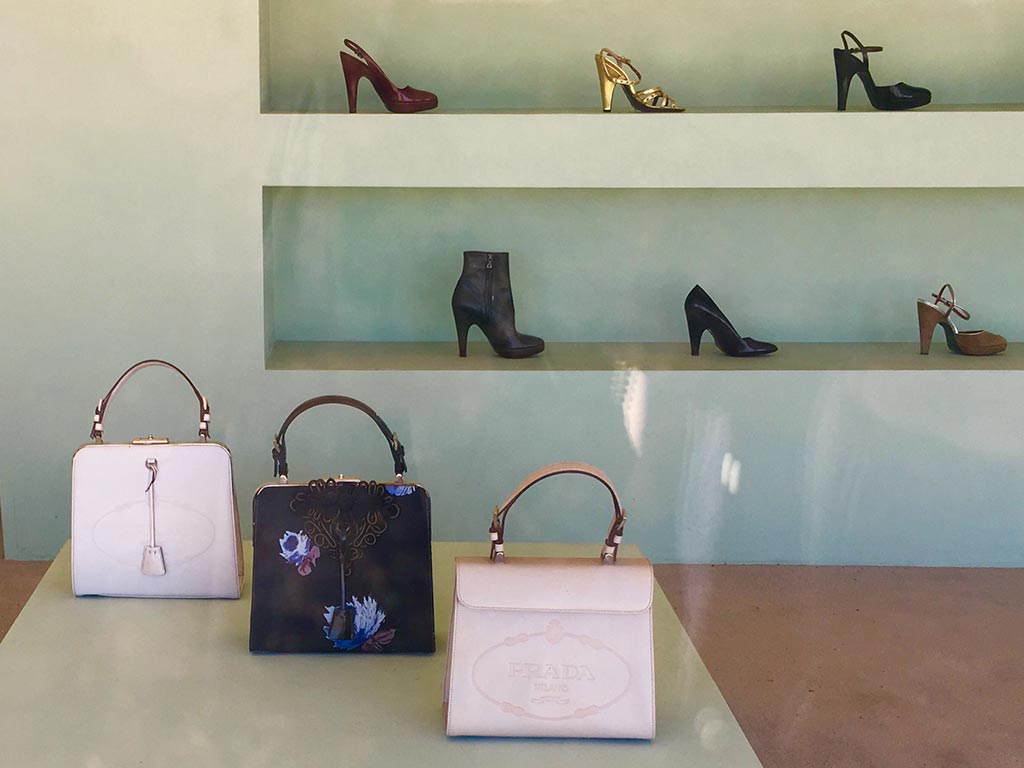 Marfa itself is an eclectic socio-economic mix of people in worn-out cowboy boots, flip-flops and sturdy sneakers. You may see Prada flats on wealthy locals but more likely on the feet of weekend tourists. The online magazine Salon quotes a local cattle rancher: “We’re filling up with triple A’s—artists, assholes and attorneys.”

Behind Prada Marfa, visitors, hoping their love will last, have attached “love locks” to the chain-link fence. It reminded me of a line in Jeffrey Yang’s book Hey, Marfa—”chainlink emptiness” and made me hum the lyrics to “Unchained Melody” in my head. “Oh, my love, my darling, I’ve hungered for your touch, A long, lonely time…” 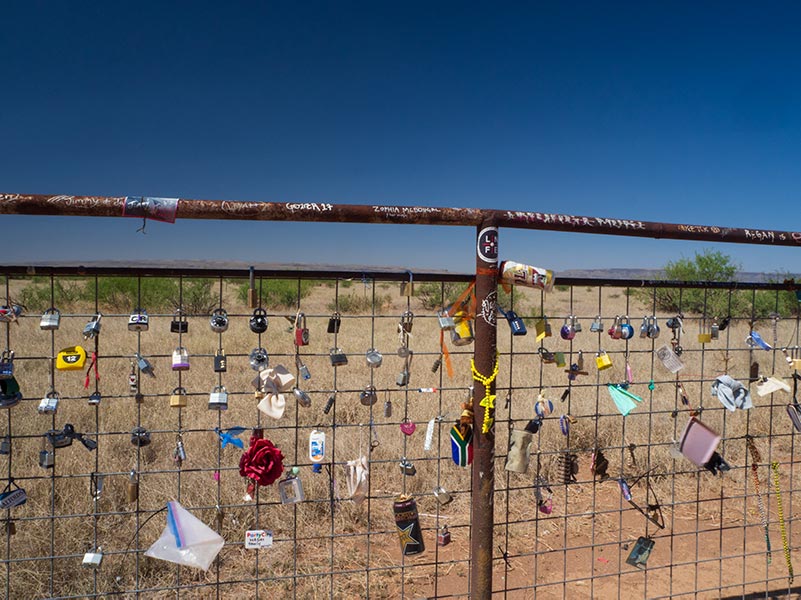 Ah, what we do for love.

Spend money on brands we think will make us more attractive, help us fit in, be in fashion, impress others, elevate our status. And when we don’t have the money, we buy knock-offs to try achieve the same results. Retail therapy as a temporal solution for collective emptiness. Although judging from the polarized reaction of vandals who deface it and fashionistas who pose in dreamy selfies, ironically, some visitors see it as a tribute to consumerism. In fact, the Texas government interpreted it as such and now it’s supposed to be referred to as the Prada Marfa Museum. 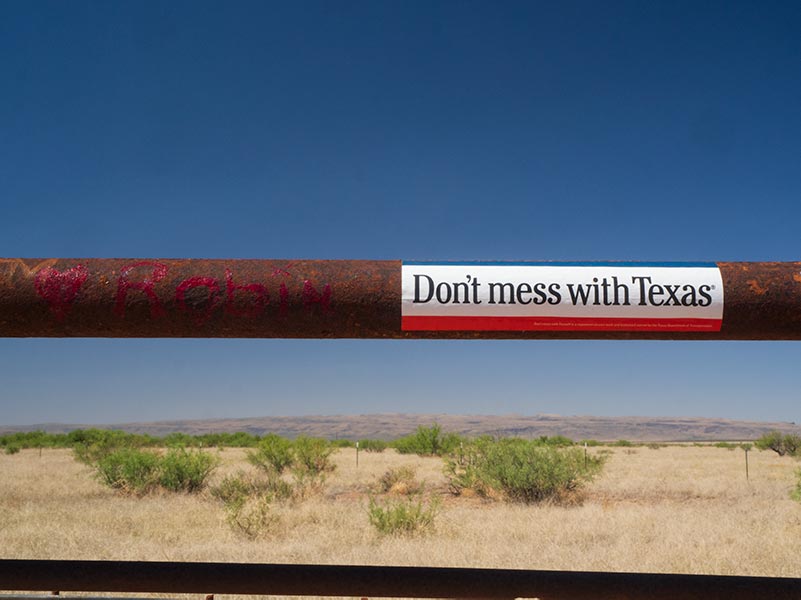 Further beyond Prada Marfa lies the empty desert. But here too, appearances deceive. Thousands of acres of land are owned by a few wealthy ranchers. Jeff Bezos of Amazon fame, the richest man in the world (we’ll see how his recently announced divorce changes that), bought up 239,000 acres for his Blue Origin aerospace testing and operations.

And further beyond, sixty miles west, is the Mexican border, which makes Prada Marfa feel even more surreal. That blimp you see in the sky is US government surveillance.

I wondered what the “oracle of fashion on the state of the world” had to say about the world today. In a review of Prada’s Spring 2019 Ready-to-Wear collection, Vogue quoted this from Miuccia Prada:

…people are different kinds—they’re intelligent, they’re stupid, they’re cultivated, they’re not. I speak to people. What worries me is simplification. Because politics is run by slogans—or not even that, by a hashtag. If you take away content and simplify, at a certain point you can’t say anything. 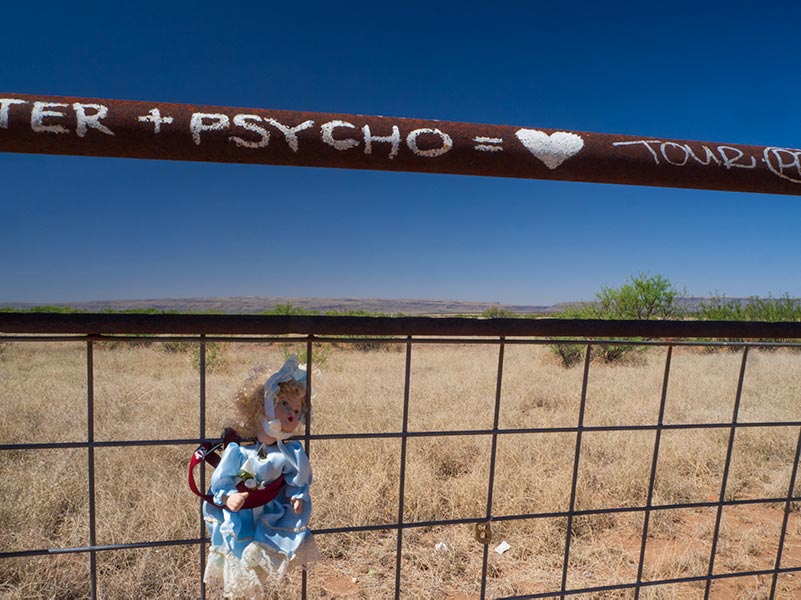 The lead photo is from Google Earth.

Rael, Ronald. “House of Prada/House of Mud.” Rael San Fratello. Ronald and Virginia San Fratello were the architects of Prada Marfa. An expert in earthen architecture and an accomplished author, his essay offers a brilliant perspective on Prada Marfa.

The close-up photo of handbags and shoes if from Ripley’s Believe It or Not.

Yang, Jeffrey. Hey, Marfa. Minneapolis: Graywolf Press, 2018. A multifaceted book of poems and drawings that’s “an anti-travel guide, an anti-western, a book of last words—that is a lyrical, anthropological investigation into history, culture, and extremity of place.” Another good line in his book is “Leave your pretense at the Prada.”

A Lump of Coal for Christmas
3 replies