“Change your money on the black market,” friends who’d been to Argentina advised, “You’ll get 25 percent more than at the banks.”

I was all for it, but Magellan was skeptical. “I don’t want to get robbed in some back alley,” he protested.

When we checked into Hotel Cap Polonio in Ushuaia, I asked Julianna at reception where I could change money and get the best deal. “Go to the toy store down the street,” she said. “The official rate today is 7.89 but I think they’ll be offering 10 ARS {Argentinian pesos} for one American dollar.” Magellan rolled his eyes.

Ushuaia is the southernmost city in the world. With its low-slung wooden buildings and elongated main drag, San Martin Avenue, it feels like a frontier wild-west town. As it is.

Ushuaia, with a population of about 120,000 people, is the capital of Tierra del Fuego province in Argentina
(Photo: Intrepid Travel)

“This must be it,” I said as we came to a window full of toys within a furniture shop.” We walked in and were greeted by an older man. I explained what I wanted to do. He looked perplexed, indicated he didn’t understand English and directed us to the small, glassed-in office near the back of the shop. Looked like the transparent office of a “banker” to me. Sitting at a chair behind the glass was a young Argentinian guy, handsome with his dark hair and intense blue eyes.

“I’d like to change 200 US dollars into pesos. We were told at our hotel that this was the best place to come.” I said, covertly not naming the hotel or Julianna, but wondering if I should.

Without saying a word, he locked his eyes on mine and stared directly at me. For. A. Full. Thirty. Seconds. Finally, “Only $100 is possible,” he said.

I gave him $100. He took it, stood up and disappeared out the front door, leaving us alone with his older colleague. “I wonder if we’ll ever see him again,” Magellan said.

About three minutes later, our arbolito returned and handed us 2,000 Argentinian pesos. “I was able to change $200 for you,” he said. I thanked him, gave him another $100 and off we went to start spending it, beginning at the town’s excellent Museo del Fin del Mundo (MFM: Museum at the End of the World) and lunch at Ramos Generales. 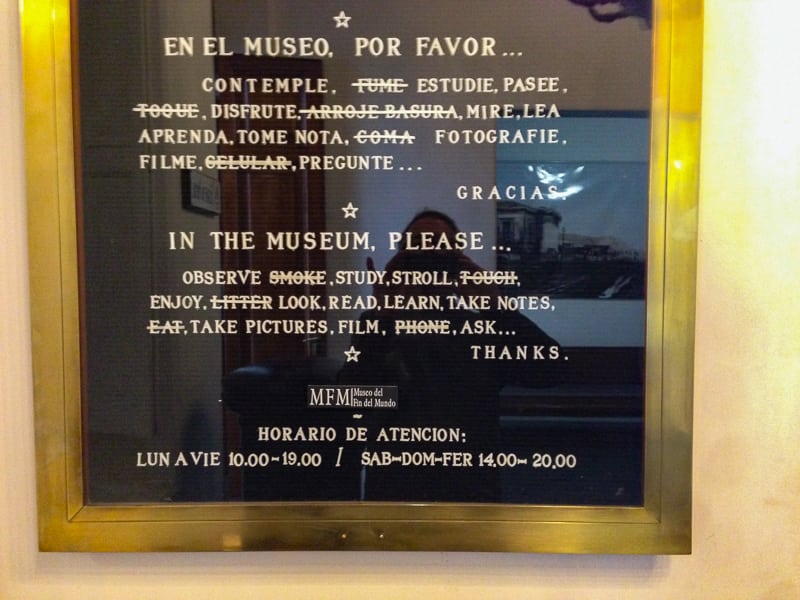 At MFM, the most beautifully drawn map we've ever seen

Opened by Don José Salomón, who came here in 1913 from Tripoli, ALMACÉN DE RAMOS GENERALES became a centre for supplies, a meeting place for social and cultural gatherings, and a shelter for the needy, newcomers, gold-seekers and travellers. It also had a relationship with the “Fin del Mundo” jail

Quirky memorabilia throughout, like the rocking-horse chandelier held up by a slice of driftwood

Sopa de Cebolla it was

Multilingual signage (look at the figures peeking over the toilets)

“Did you change your money okay?” Julianna asked when we returned. I thanked her and relayed the story of how the guy had stared me down when I asked to do the transaction. She just shrugged.

The next morning we were back on San Martin, flaneuring amid shops selling outdoor equipment, chocolate, hardware, coffee, handicrafts, ice cream… Then I saw the toy shop. The one Julianna had recommended. The one with a sign on the door indicating they exchanged US dollars for pesos at a 10.2 rate.

Is this the toy store cueva, the place where the arbolitos, the illegal money changers, hang out?
(Photo: Google Street View)

Or is it this toy store cueva?
(Photo: Google Street View)

Spending our 27% currency gain on whisky ice cream with vanilla bean seeds and dried quinoto, a kind of kumquat grown in Patagonia

Now we knew why the guy at the other toy store was so incredulous when we asked him to change money for us—we’d gone to the wrong place.

We laughed about our ”black-market bank” and lamented the better deal we’d have gotten at the real toy store.

“Let’s go farther down and see what the commotion is all about,” Magellan said. About 300 protestors were beating drums, tooting whistles and carrying placards, demonstrating their desire for the government to do something about the massive unemployment rate. Across the street was our “black-market bank.” The older man was standing outside watching the protesters. He smiled, and gave us a big wave.

Since our visit to Argentina, the official rate of exchange is now based on supply and demand and the best place to change your money is the banks. But I’d confirm that at your hotel, like I did at the Hotel Cap Polonio.

When in Ushuaia, Ramos Generales is a must-visit. Ditto for the MFM and its extension, Government House.

Invaders of the End of the World

FitzRoy, We Loved Your Weather

Letters to Those I Love, Save One

Rhubarb: The Quintessential Sign of Spring
Scroll to top