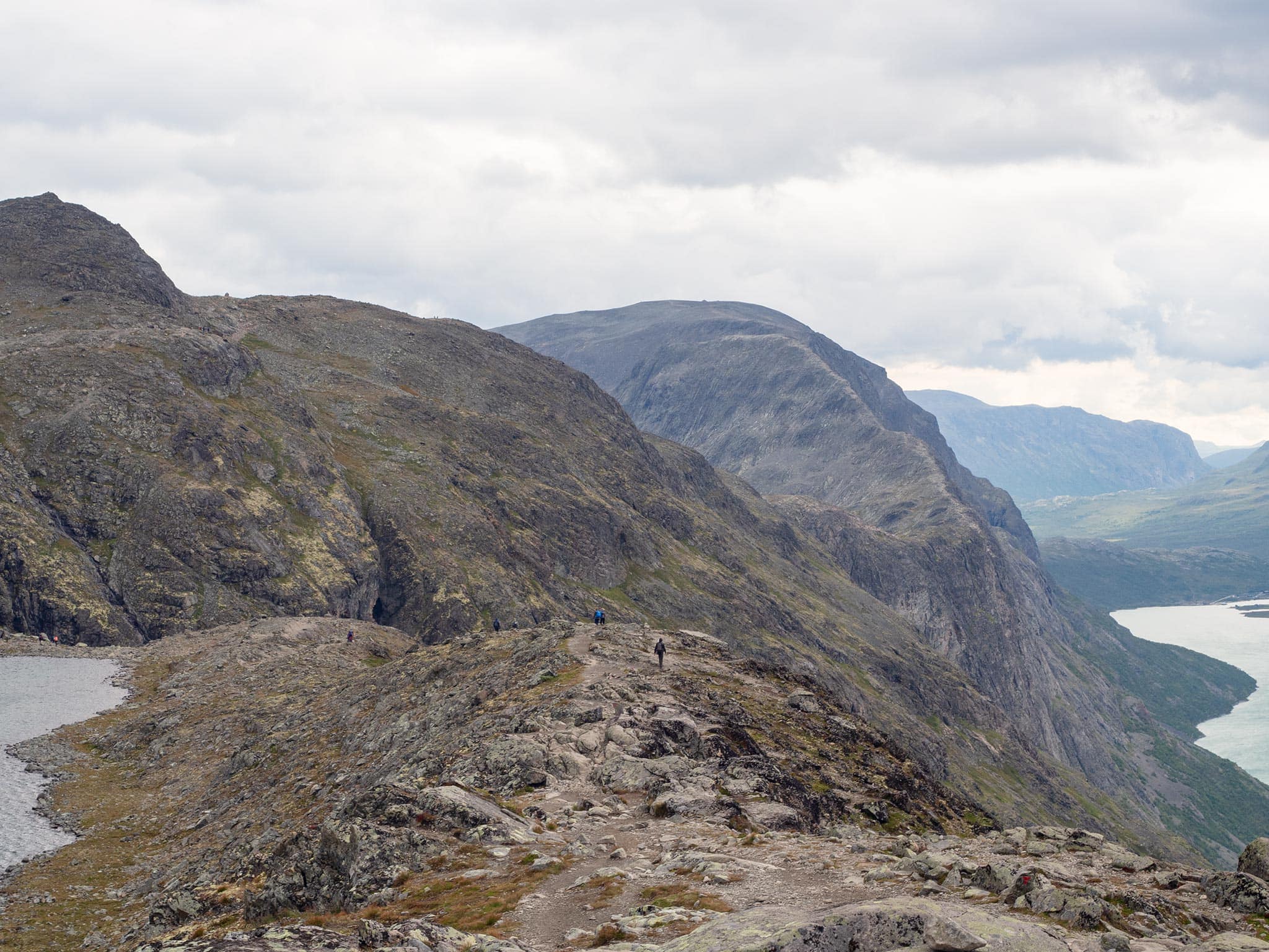 It was all my fault.

“Besseggen Ridge” reads my diary entry, “the most spectacular (and difficult) hike we’ve ever done.”

Besseggen Ridge is Norway’s most popular day hike. National Geographic named it one of 20 best in the world. Visit Norway says it’s for experienced hikers in good physical shape. Depending on the source, its elevation gain is between 1080 and 1300 metres and it takes six to nine hours to complete. Sounds good for Magellan and me, right?

I copied National Geographic’s description into our Norway file, focusing on the words I’ve changed to blue instead of the last two in magenta:

The 10.5-mile hike across the rocky ridge that splits the green glacial lake Gjende and high alpine lake Bessvatnet surrounded by Norway’s highest mountains provides one of the most remarkable views on Earth. Besseggen Ridge is one the most popular day hikes in Norway. The iconic view is characterized by the Gjende and Bessvatnet lakes. Gjende is a stunning emerald color and very long and narrow. Bessvatnet is a deep blue and among Norway’s clearest lakes. In fact, it’s said you can see up to 30 meters below the water. There’s also a plethora of great peaks that rise up above the landscape in all directions. Rarely will you see landscape more beautiful. Hiking the Besseggen ridge is very demanding.

“I don’t know about some of the hikes you’ve got listed,” Magellan said to me about a month before we left. “Like this 28 kilometre one…”

But he wasn’t concerned about Besseggen, which was to be our first hike in Norway.

“It can’t be that hard. Sixty thousand people a year hike it,” Magellan said.

He downloaded Outt, a hiking app for Norway. I took a quick (emphasis on quick) look at the first line in Outt:

Besseggen Ridge has a special status among Norwegians and hiking the ridge is considered a rite of passage, no matter your age.

The week before we left I read Summer Light: A Walk Across Norway and again, focused on the wrong words:

There is a drop of hundreds of metres on either side of the crest and to look down is to invite dizziness…It’s amazing that, with hundreds of thousands of hikers climbing down this narrow ridge since Jotunheimen became a national park in 1980, that no one has been killed.

On Saturday, the day before our hike, I read Outt’s full description and again, focused on the wrong words:

From this ridge you start hiking and occasionally scrambling up the actual Besseggen Ridge. The ridge is fairly steep, rising 300 meters and is at times quite narrow. The first part of the ridge is fairly wide but as you move up the ridge gets narrower and steeper. If you are scared of heights this upper part is where you will potentially feel the most exposure. But note that the steepest part is not very long and once the ridge levels off you are done with the hardest part.

“Do you think we should do this?” I asked Magellan.

“Some guy ran it in an hour and fifteen minutes,” he assured me.

While National Geographic suggested we hike east to west for better views and to avoid the boat ride to the trailhead, every other source we read said the opposite. I asked the guy at the campground check-in at Gjendesheim. “Fifty/fifty,” he said, “depends on whether you like walking up or down on the steepest section.” It was August 24, end-of-season and he was tourist-weary. Loosening up a bit, “I’d say 90% of the people hike it west to east,” he said. “How’s the trail?” we asked. “About forty of my campers walked it today and they had no complaints,” he said laconically. A young woman overheard us. ”I did it today. You’ve got hiking boots right?” she asked. Then, looking us over, she said, “You’ll be fine. But book the boat online tonight; it can get busy on a Sunday.” 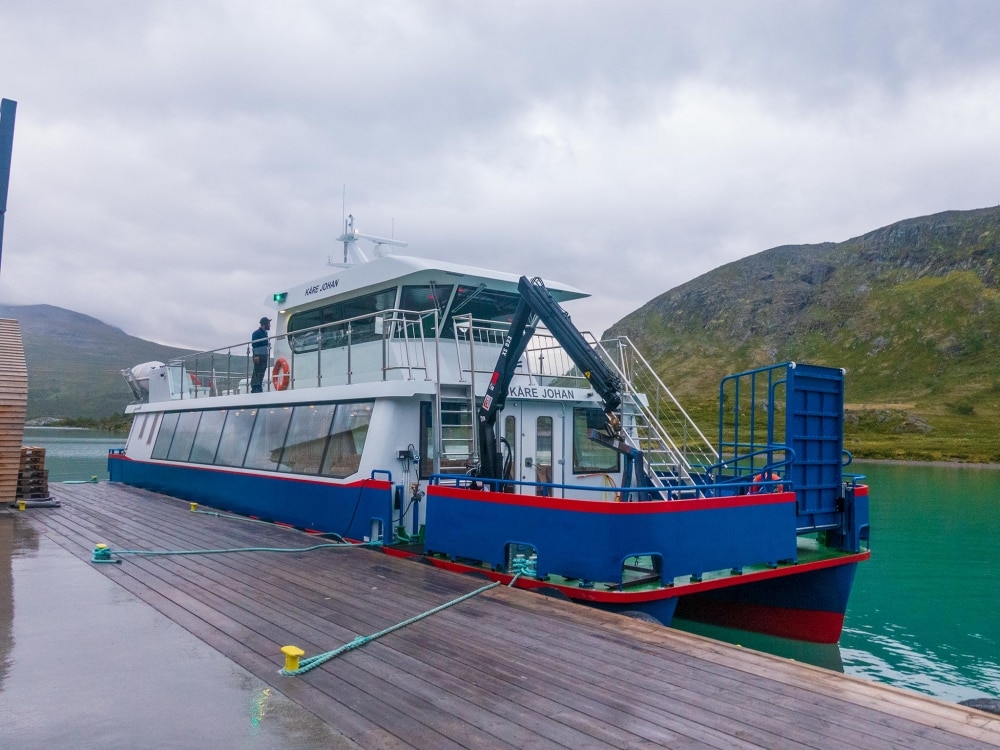 Getting an early start 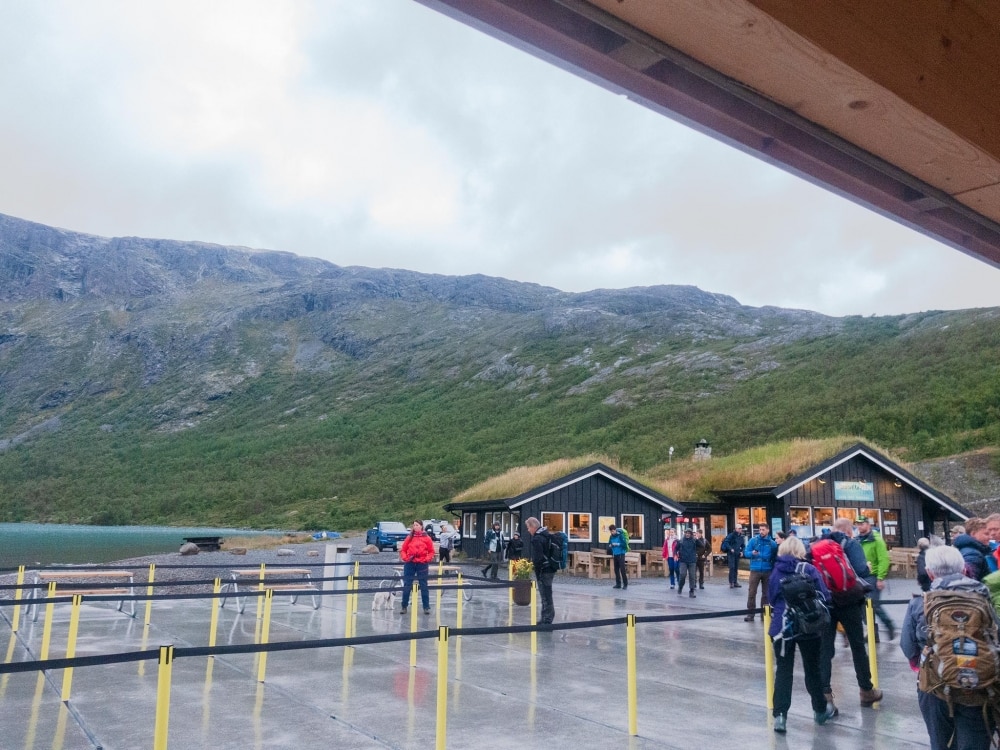 A small lineup for the boat 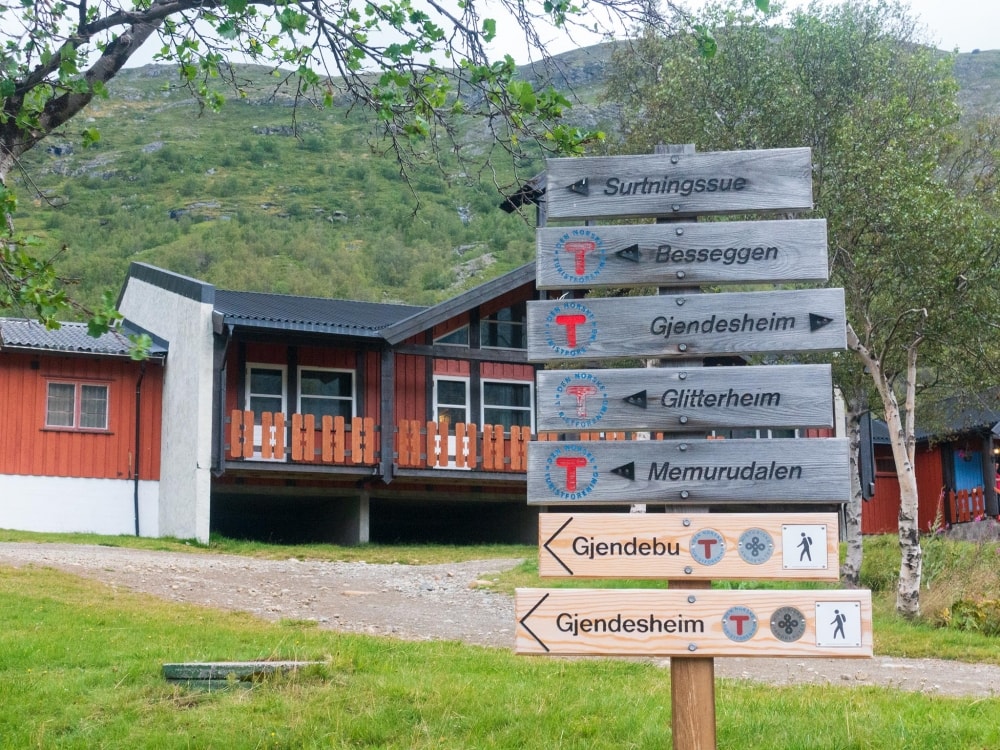 No indication of distance or difficulty

Up early, we caught the first boat at the Memurubu jetty and after a twenty-minute ride with a few dozen other hikers (all of them much younger than us), we were at the trailhead soon after 0800.

Climbing up the trail lined with small mountain birches , we soon stripped off our jackets and toques. I swear Norwegian trail makers do not know the word “flat” or “zigzag.” Treks in this country, we discovered, often go straight up and straight down. But the temperature was perfect for hiking and peeps of sunshine lightened the overcast sky.

After two hours, we came to the tiny Lake Bjørnbøltjønne, a pretty place for a rest and a snack. How far had we come? Unlike in most countries, there are few trail signs or waypoints in Norway. 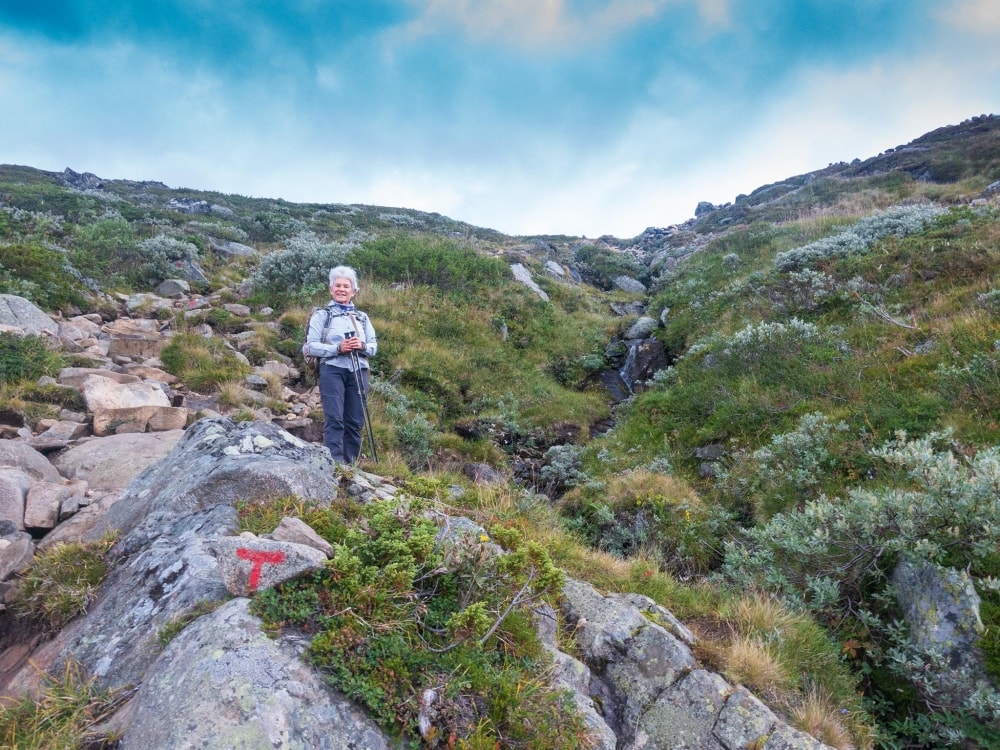 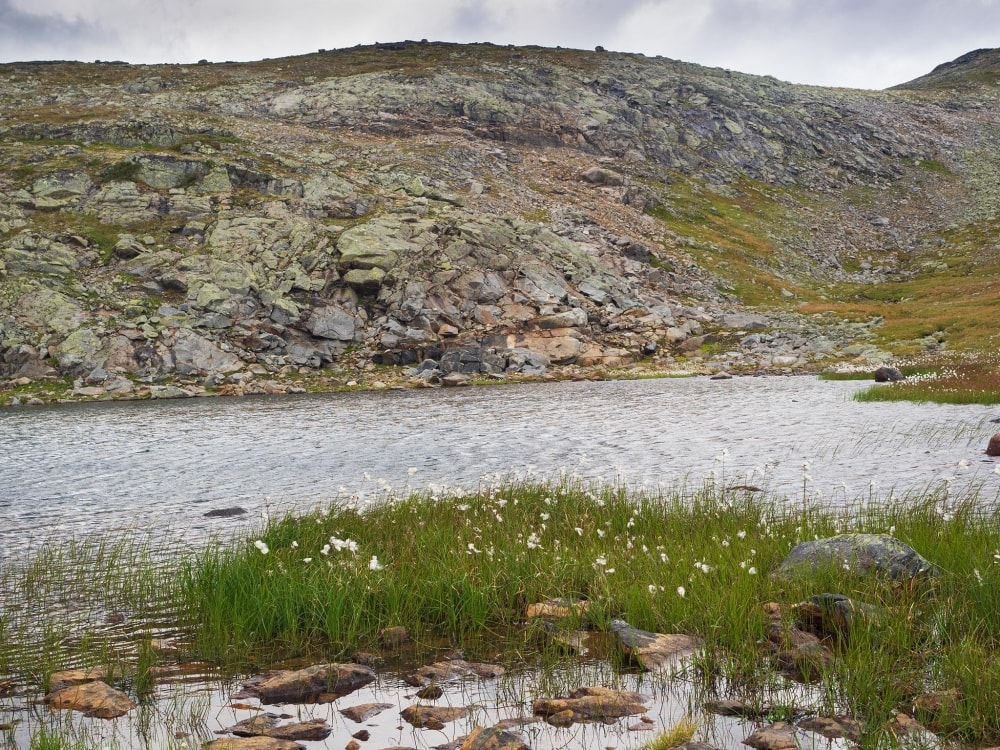 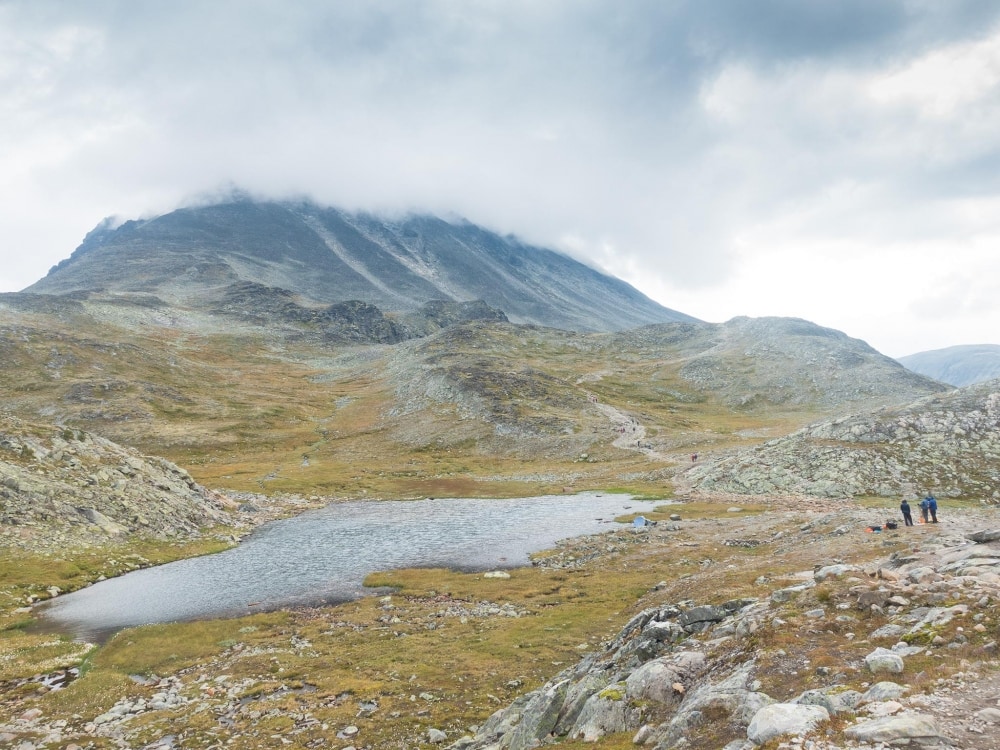 Then the oohing and ahhing. Besseggen is in Jotunheimen National park, home to Norways’s 29 highest mountains. Glacier-fed Lake Gjende (twenty kilometres long and a kilometre wide), its waters a milky-soft emerald on the right contrasted with the azure blue of the smaller Lake Bessvatnet (seven kilometres long) on the left. Glacier tongues licked the sides of the mountains above Lake Gjende. Waterfalls plunged down the mountainsides. Moss Campion and Arctic bluebells bloomed beside the trail, a khaki thread stretching to the horizon.

Then the steep, rocky ridge that prevents Lake Bessvatnet from draining into Lake Gejende 400 metres below. “This isn’t so bad,” I thought, foolishly thinking to myself that this was “the Ridge!” (It’s called “the Strip.”) I found it difficult to pick a path that (a) wasn’t too steep going down over small boulders and (b) wasn’t so freaking close to the lake that I’d fall in. I followed Magellan’s lead down to the lake path after ignoring a plaque on a higher ledge that a few hikers were gathered around. (Later, my suspicions were confirmed. It was in honour of a man in his late seventies who fell ten metres on this section of the trail in June 2018, hit his head on a rock and died.) 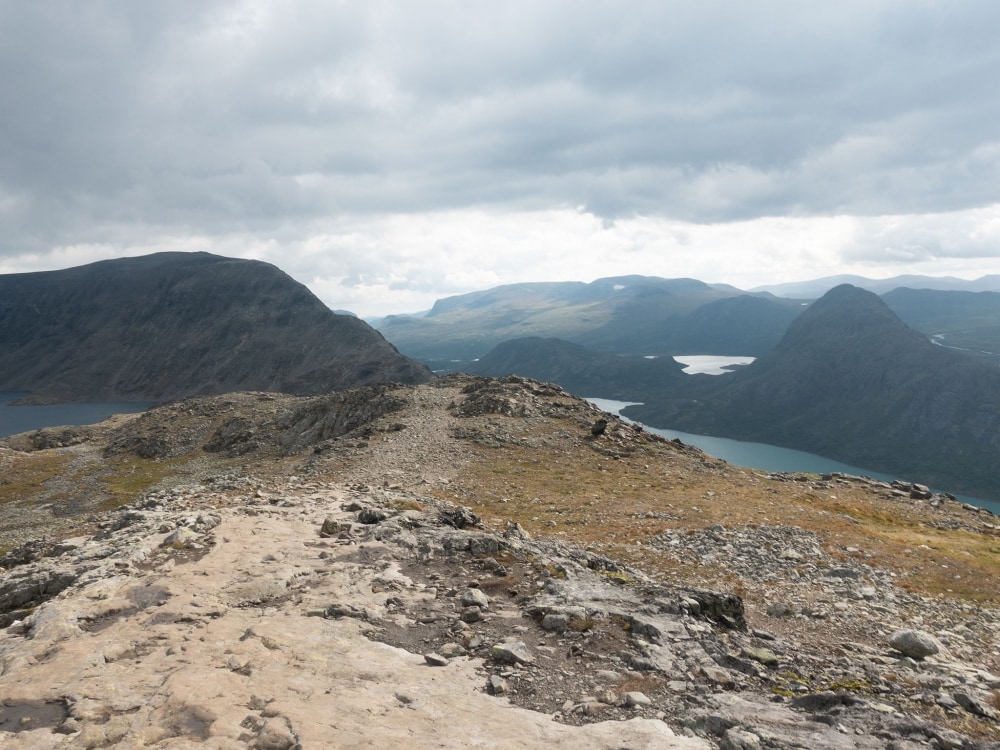 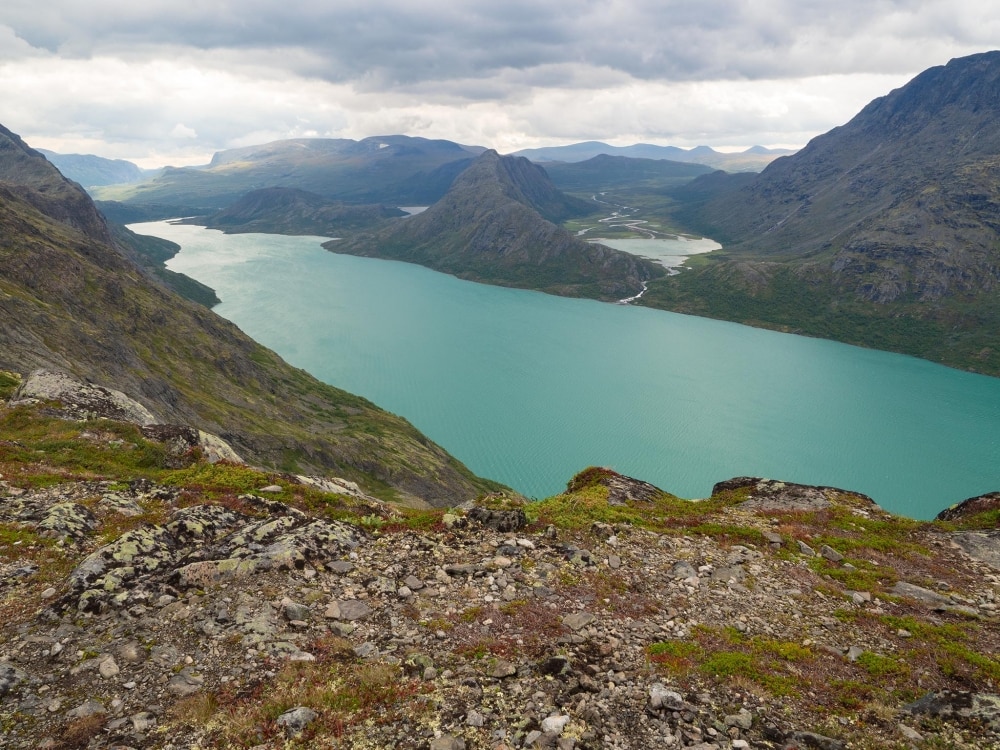 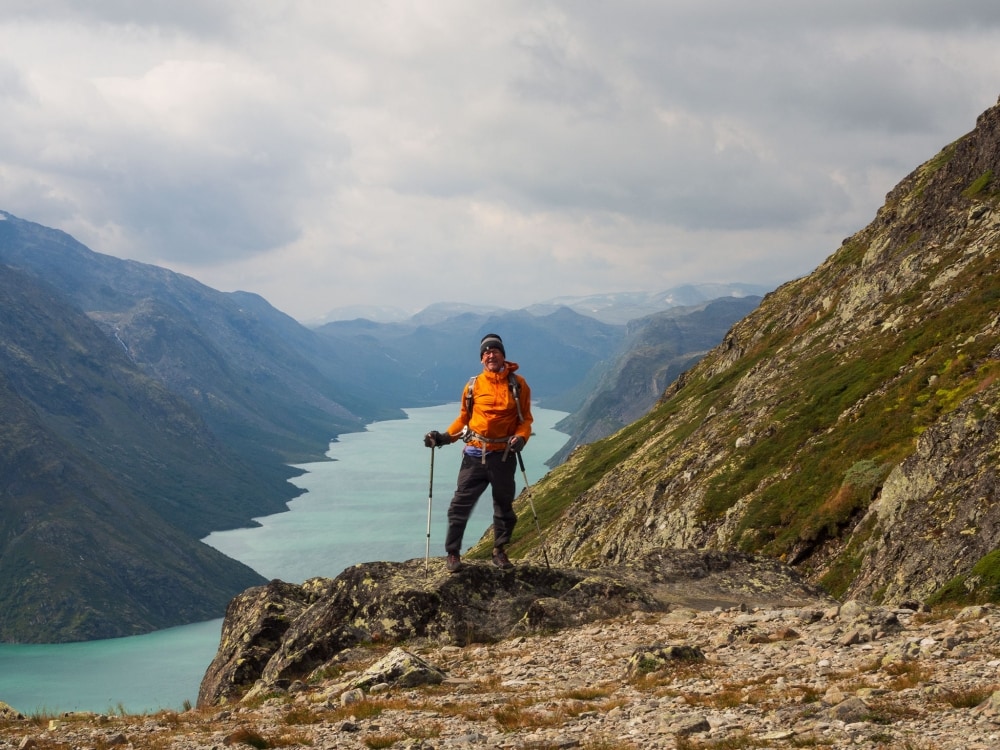 So intent on watching my every footstep (I have no ACL in my right leg, a birth defect in my left foot plus bunions and hammertoes on both feet so I’m cautious), I hadn’t been looking up ahead. Until we finished the Strip and there I was, face-to-face with the Ridge. 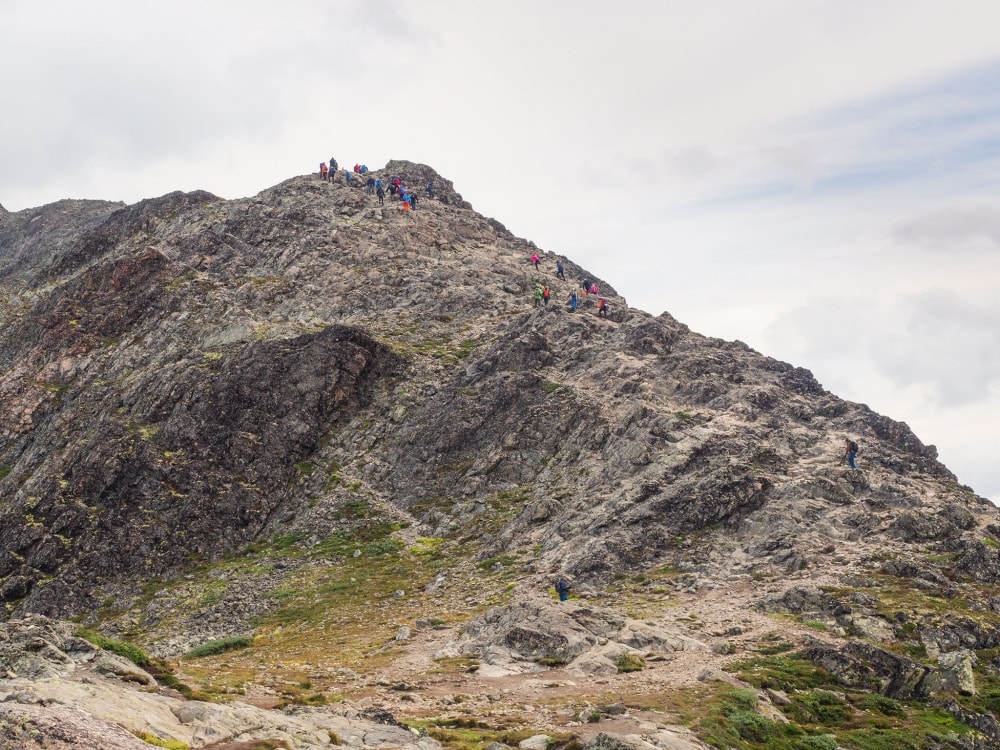 The Ridge awaits us 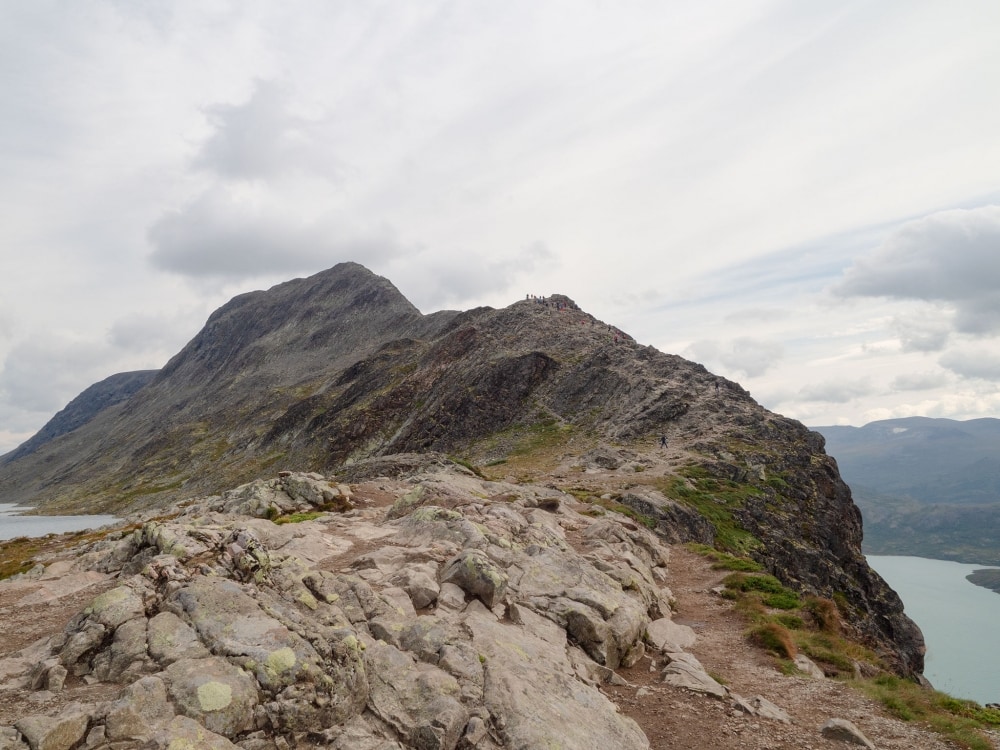 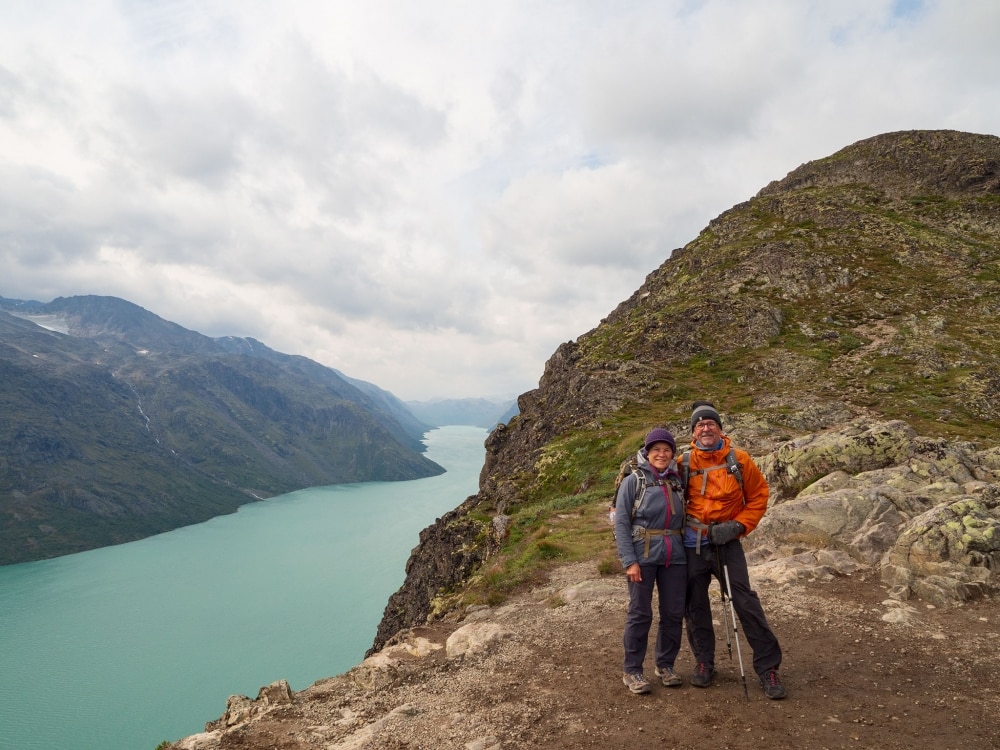 Before the Ridge climb 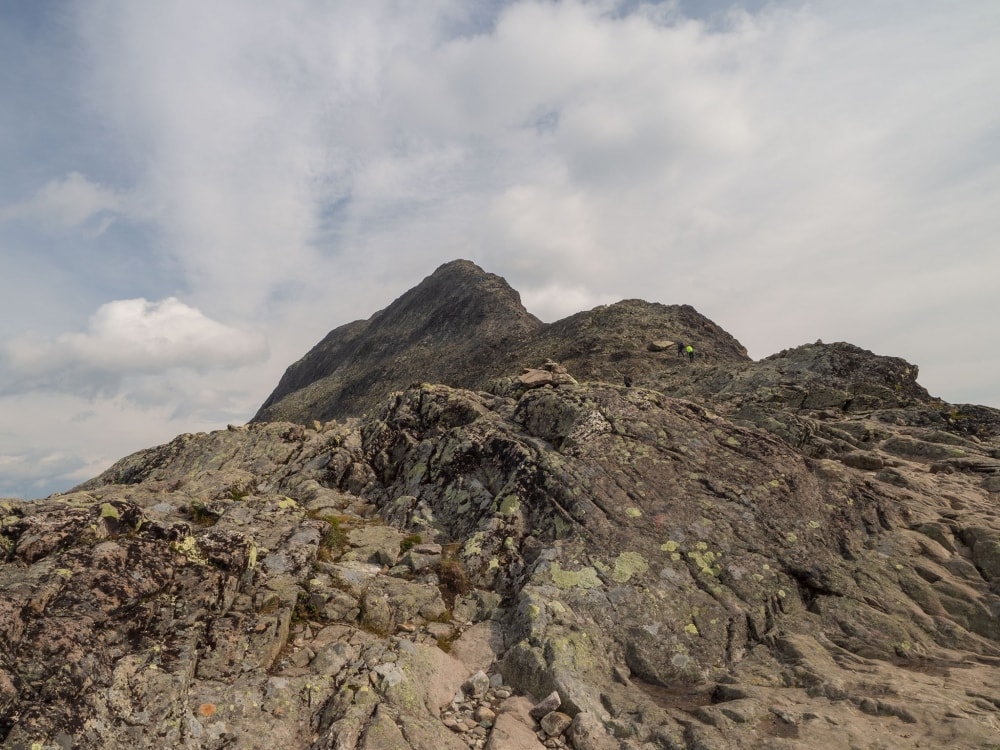 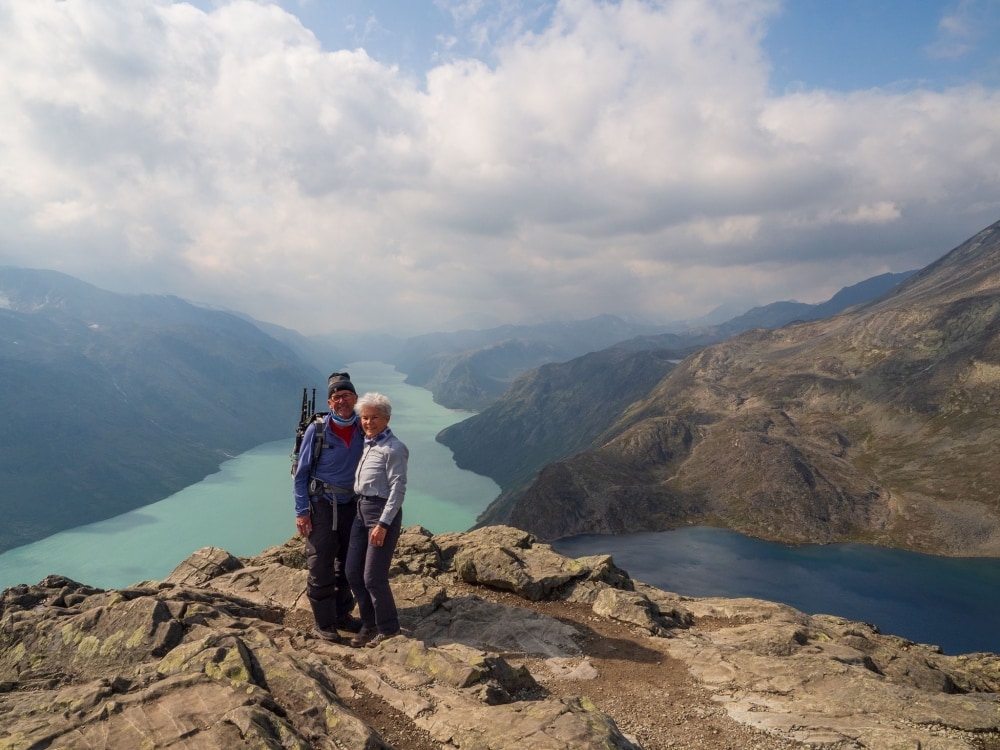 Top of the Ridge, only another 150 vertical metres to the peak 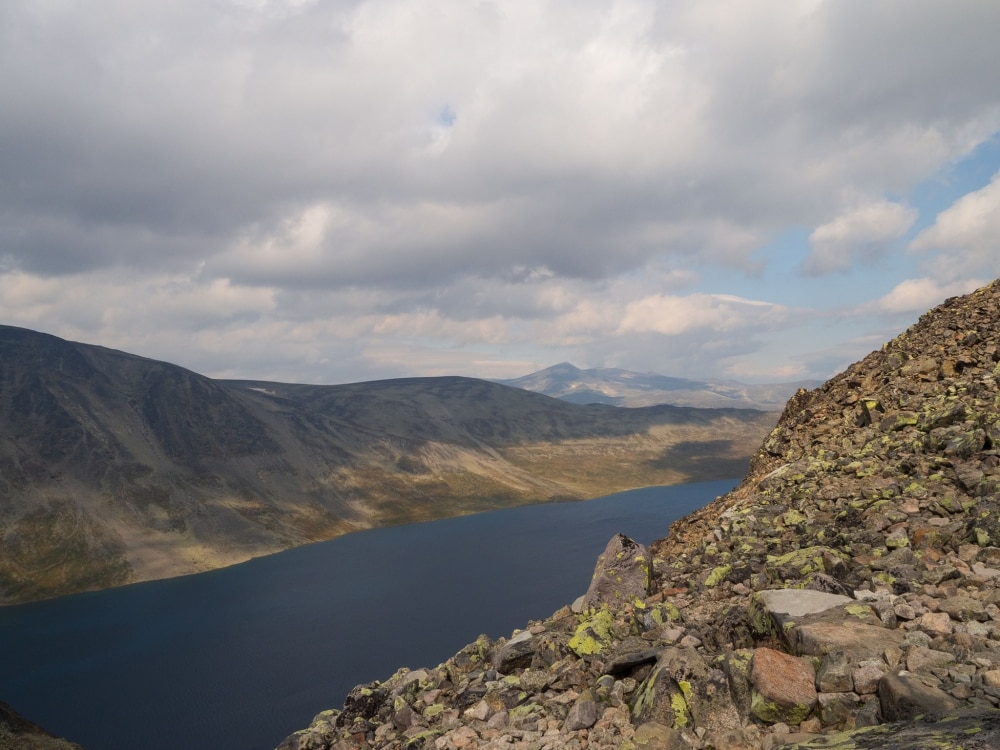 Notice the brilliant green of the reindeer lichen

Boulders, all you could see ahead was boulders. So steep you couldn’t see how narrow the Ridge was at the top. Or for how long the boulder ridge continued. Which may have been a good thing—it was almost half a kilometre.

(Magellan told me later that he’d been eying the route along the knife-edge ridge from a few kilometres back, watching to see which side hikers chose to scramble up.)

Adrenalin cramped our appetite; neither one of us was very hungry for the goat cheese, sausage, flatbrød or oranges in my backpack. Not even the chocolate.

By this time, most other hikers were over the top except for a young couple sitting nearby, her face white as a blank sheet of paper, her eyes wide with fear, his voice quietly assuring her.

Silently, I weighed our options: go forward, or turn around? If we turned back, we’d likely miss the last boat at Memurubu and then where would we spend the night?

“We can do this,” said Magellan. “Let’s put our cameras away. And I’ll take our poles in my pack—we’ll need both hands. You can do this. Go first. I’ll be right behind you. ”

“How old are you?” asked one of the young men in a group of three who’d just arrived and were about to start the boulder climb.

“Almost seventy and he’s a year older,” I responded.

“Good for you guys. Way to go!” he exclaimed. Up they went, Magellan and I at their heels.

Where, where does it come from, that burst of courage and calm in the face of danger?

From Magellan’s logic and encouragement. From a tenacious trend toward completion. From someone I call Gloria1, the woman who started Semperviva where I practice yoga classes four times a week. “Long. Calm.” is my personal mantra. But on the Ridge, I had no time to breathe it. Every fibre of my mental and physical being was focused on that climb up the boulders, some of them chest-high.

Check for the DNT’s waymarks, red “Ts” faded by ravages of pummeling snow driven by Arctic winds, even in August.

At the narrowest section, I looked back to Magellan. Stuck. Very near the edge, Lake Gjende 400 metres below. “Are you OK?” I asked. He was having a moment. The mind was willing but the leg was resisting.

Have you ever
chanced to see the Gendin-Edge?
Nigh on four miles long it stretches
sharp before you like a scythe.
Down o’er glaciers, landslips, scaurs,
down the toppling grey moraines,
you can see, both right and left,
straight into the tarns that slumber,
black and sluggish, more than seven
hundred fathoms deep below you.

Three times on the Ridge we stopped at a “landing” (flat boulder in the middle) to catch our breath and swallow a few mouthfuls of water.

I was never so relieved to place a rock on the cairn at Mount Veslfjellet, the highest point of Besseggen, 1743 metres. And thankful. Clambering down the Ridge would have been even more difficult. And you know what? The half hour or so it took to hike it was actually quite thrilling and far less scary than anticipating it. We wish we had had our Go-Pro so you could see this section but alas, we’d left it in our our motorhome, Hjulrundt.

But this hike was far from over. We were only halfway at this point. 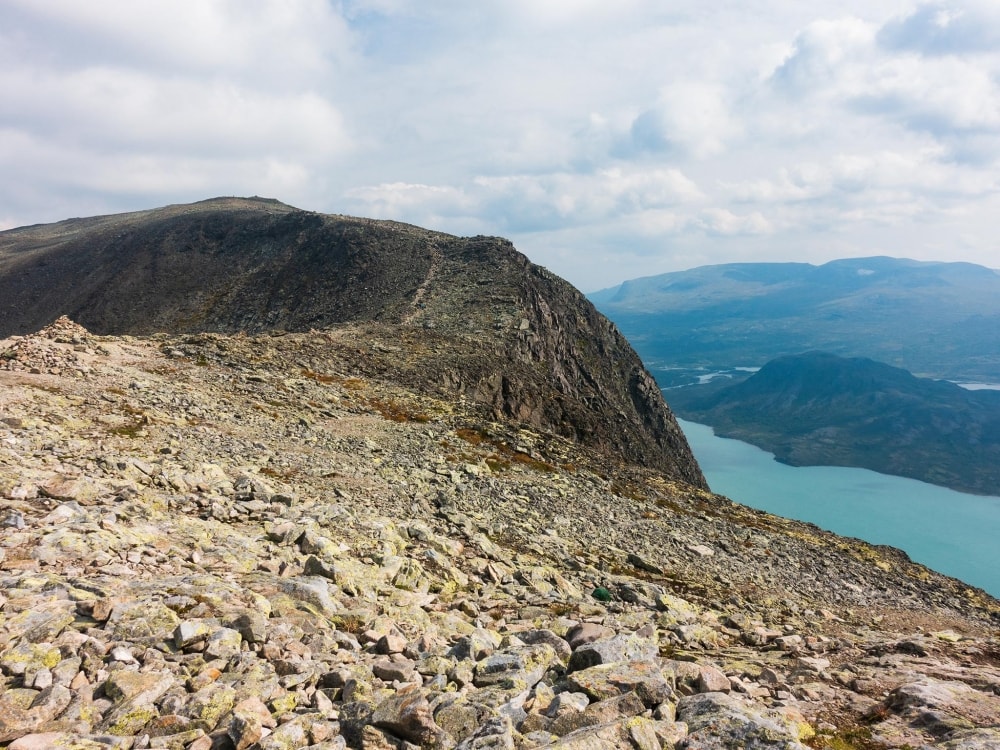 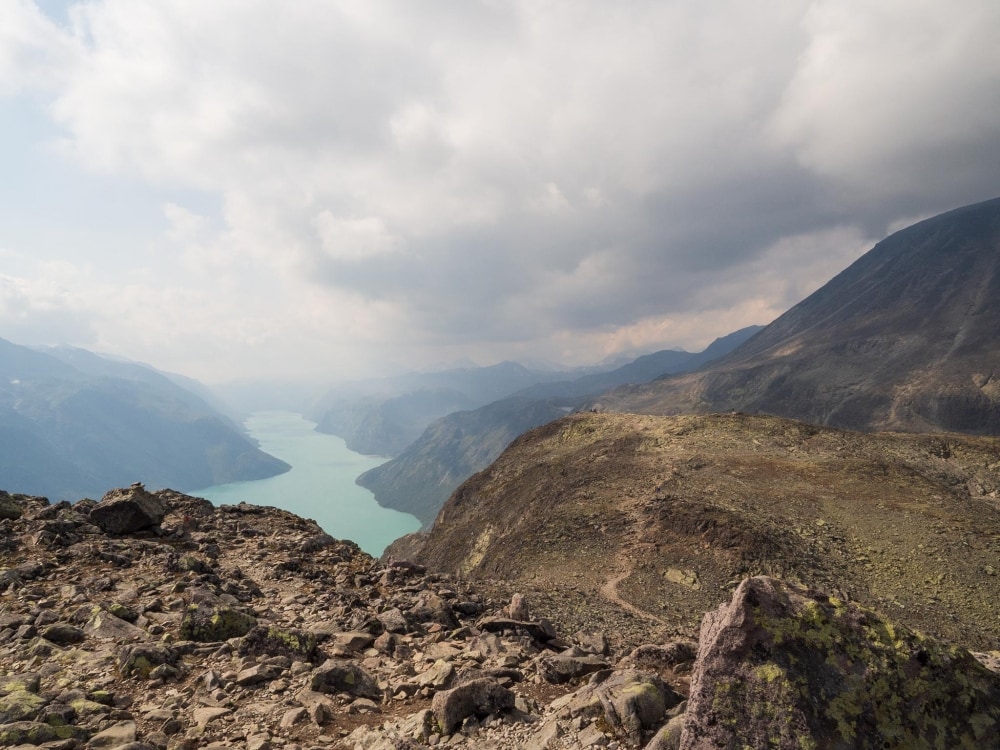 Looking back from the peak 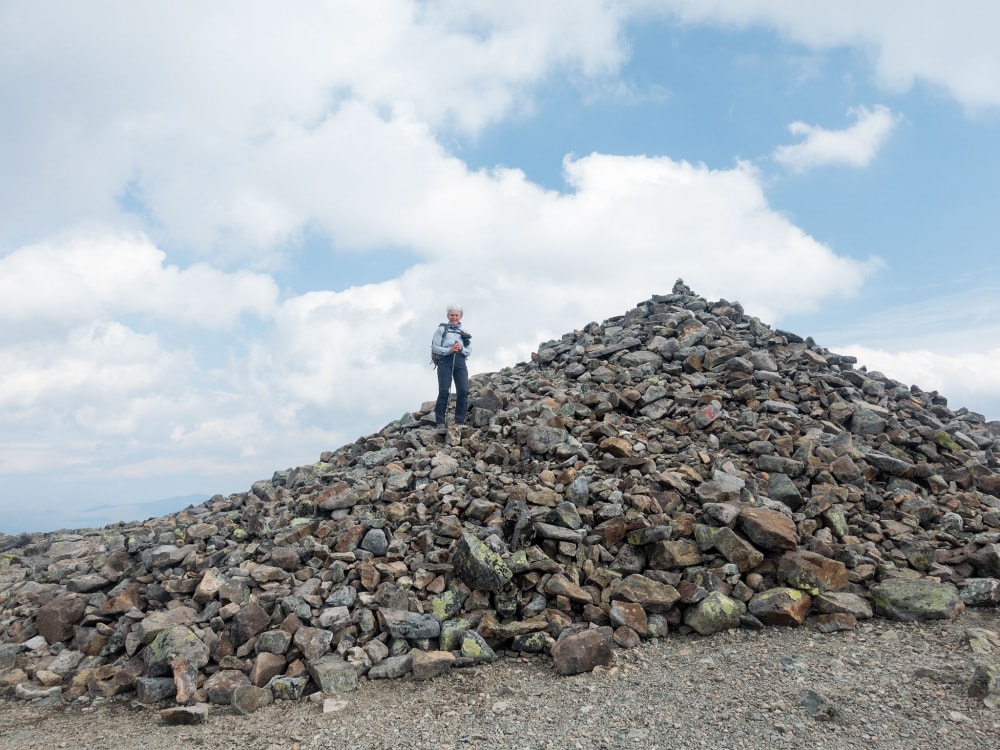 Adding my stone to the thousands 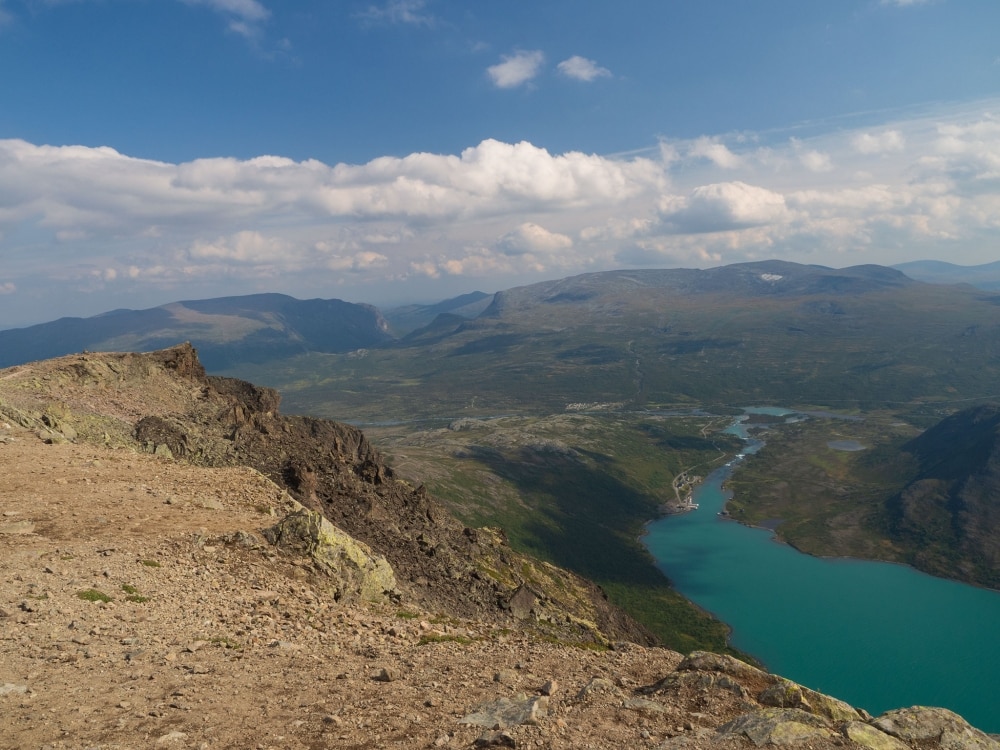 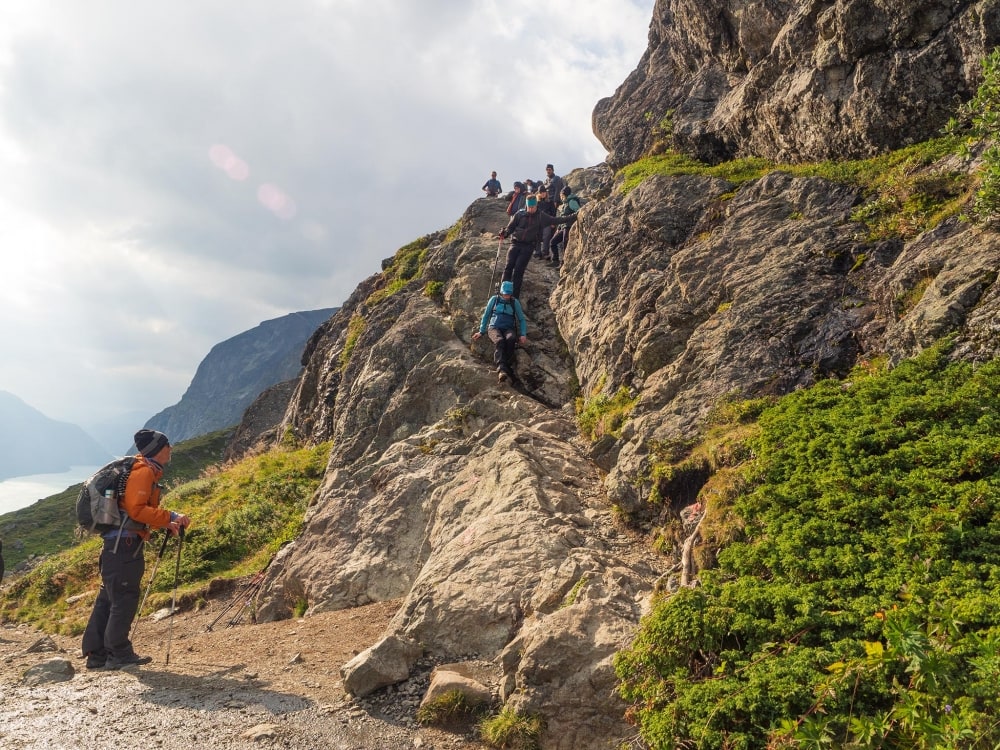 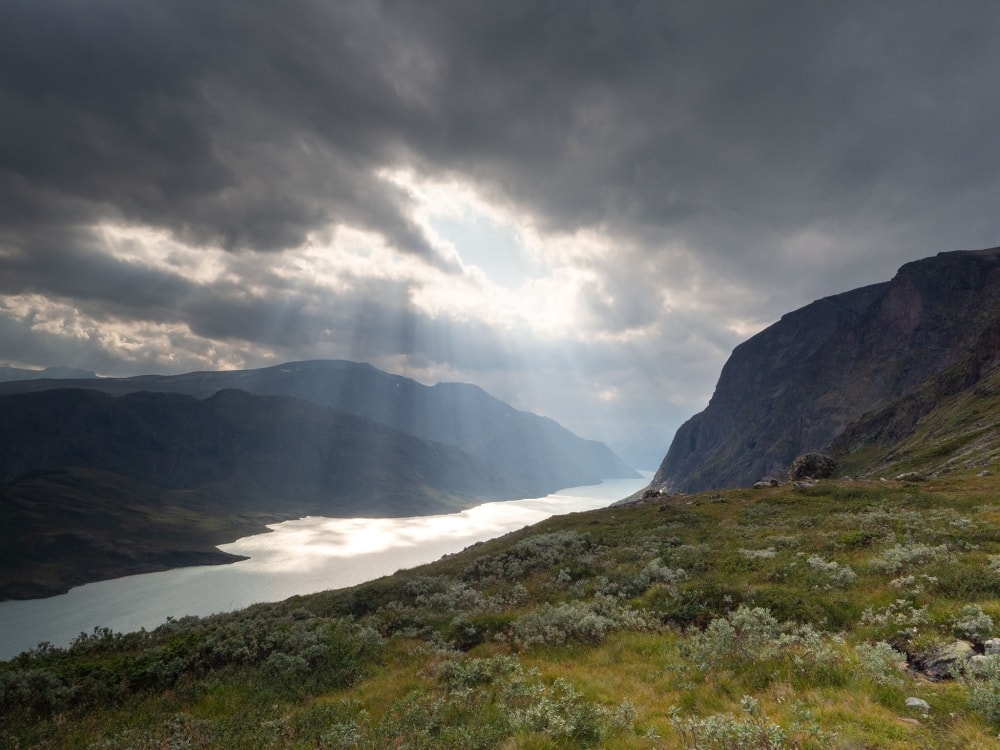 Our emotions reflected in the sky

A barren plateau followed, then more ups and downs followed by a long descent to the Veltløgfli Gorge—knee-terror—picky stepping over ledges with limited footholds, loose rock and, in the last three kilometres, giant steps, likely placed by sherpas from Nepal who have done so much stair-building on other trails in Norway. Did I mention the tricky descent with a chain to assist you that took one frightened young woman at least five minutes?

For the first time in our many hiking ventures Magellan needed an Ibuprofen. No wonder; nine-and-a-half hours of hiking with an average grade of 15%, the maximum is 55%! Every night for a week, I was jolted awake by dreams of the perils that what might have happened. When we got home I wondered how long it would take to die if I had fallen off the Ridge. (9.8 seconds to hit the water.)

After we returned to Hjulrundt and poured celebration drinks, Aquavit for me and beer for Magellan, we talked about how the Norwegians consider hiking Besseggen Ridge a Rite of Passage. “More like Last Rites,” Magellan laughed.

Here’s Outt’s description of the hike.

Watkins, Paul. The Fellowship of Ghosts: Travels in the Land of the Midnight Sun. New York: Picador, 2004. An excellent book on Norway. “Don’t go” I have written in the margin beside his description of Besseggen Ridge. My memory is short

Highway to “Paris of the North”