Only once have I seen the Aurora Borealis—nature’s fireworks. I remember it vividly: a wave of green ribboning the sky, a tinge of magenta on its tail, the distant crackling of electricity audible above the prairie wind. It was piercing cold that Saskatchewan night, January 25, 1992, after my grandparents’ 65th anniversary dinner. Ever since, I’ve longed for a repeat performance.

“We’ll see lots of Northern Lights in Norway,” Magellan assured me. He’d never seen them but was equally keen.

“Isn’t August and September too early?” I asked.

Turns out the Northern Lights intensify around the September Equinox because the Earth’s magnetic fields and the sun’s solar wind are more likely to be in sync.

“And we’ll be in TromsØ and Lofoten at that time—two of the best places in Norway for Northern Lights,” Magellan explained. TromsØ is at 69°N, Lofoten a degree south—and the Northern Lights are best seen between Latitudes 65°N and 75°N.  Because the Earth’s magnetic field is weakest at the North and South Poles, the Auroral Oval has a better chance of drawing these solar particles into the atmosphere up here. The earth rotates us in under the Aurora around midnight, prime time for viewing them in these locations

TromsØ is the most famous place in Norway to see what they also called the Polar Lights. I read that TromsØ  has 140 tour companies offering Aurora chases! Probably more now as in February, the city was featured in The New York Times.In prime time, January, apparently it’s not unusual to see four or five buses lined up at a key location and a parade of vans and SUVs racing around on five-hour Aurora chases in the surrounding countryside. The prices of tours I checked out were sky-high, starting at over a thousand NOK per person, private excursions by highly qualified operators soaring to almost five times that. (To be fair, the exchange rate for the Norwegian Kroner is 6:1 to the Canadian dollar. But still…)

Magellan prepared us to go it alone. He downloaded an app for the Kp index, a measurement of aurora strength on a one-to-nine scale based on disturbances in the Earth’s magnetic field. A Kp of three or above is what you’re hoping for. He also found a site that divulged where to take Aurora photos in Lofoten  with stunning backdrops of mountains and water: down the beach from where we’d be spending three nights! And he watched countless YouTubes on selecting the right camera settings.

Svolvaer port. Our room was the red fishing "shack" on the very right

Hunting for the aurora

We discovered the best time to see intense Northern Lights is during a period of solar maximum in the sun’s eleven-year cycle. Alas, we’d be searching in the slump year of the sunstorm’s bell curve as the next solar maximum is projected for 2024.

Still, we were hopeful.

Every night when as soon as we left Bergen for three weeks with our motorhome, Hjulrundt (pronounced you’ll runt and meaning wheel-around), we looked for the Green Grail—unless we were in a city. Although the days were quite lovely, most nights were cloudy or rainy.

Our first night in TromsØ, Friday the 13th of September, was as unlucky as astrologists would predict. Rain poured down all night.

On my birthday three days later, Runa, our host, texted us around 10:45 to say there was a wee bit of activity. We read her message the next morning. But as she said and her photo showed, it wasn’t worth getting out of our Sami Ghoahti to see.

However, we were most excited about the prospects of seeing green at the B&B we were staying at near Ramberg. We’d be on the Atlantic side and far from any light pollution—someone said the nearest city was in Scotland. Alas, the sky was covered with clouds all three nights. Tucked away in a suitcase, our tripod hadn’t yet seen the light of day—or night.

Ah well, we thought. We’d be returning to TromsØ on Sunday: maybe that would be our lucky day, the night before the September Equinox.

The Aurora Borealis has been described as the sun burping a piece of its own magnetic field into space. The colours depend on the altitude where the reaction occurs and the atmospheric gases that collide with solar electrons. The most common colour is green, which happens when electrons hit oxygen atoms about 100 kilometres up in the sky, red when they collide with higher-altitude oxygen. Solar electrons bombarding nitrogen or hydrogen atoms create hues of blue and violet.

Our last two nights on Lofoten were at Svolvær, a town of less than 5,000 people on the eastern side of this archipelago of islands. Friday night we were excited to hear a Norwegian group, “The band called Oh,” at the Lofoten Jazzklubb, so no Aurora chasing for us that night. The song in our heads was more like U2’s “But I still haven’t found what I’m looking for…”

Saturday was our last chance to see the Northern Lights on Lofoten. It was looking good. Sunny, clear skies and a high during the day of about 11° thanks to the Gulf Stream.

Magellan examined a map of the town, scouting other people’s photos of the Aurora to determine the best locations. We had a little nap, then went for a pizza about 9 pm. His app showed a Kp of 2.8. Still, the skies were crystal-fresh. Donning our long underwear, woollen socks, hoodies, puff jackets, toques, headlamps and gloves, we drove across the bridge to a quieter part of town, searching for a good backdrop. After a few unsuccessful stops I said, “Let’s just park the car and walk.”

Are those clouds over the mountain lit by the city lights, or is it an aurora?

About five minutes up the road, a dark, rocky trail led off toward a magical fjordscape. Mountains ranging above islets, ripples in the in ink-black water lit by the waning moon. Perfect! Magellan went back to the car for the tripod.

Further out on the rocky ledge, a young couple was sitting quietly with their tripod. We got to talking, almost whispering. As I was lamenting the lack of colour in the sky, they pointed out bands of Aurora Borealis that had begun to stream across the sky—veils of white to me, not green.

An all-white show was all I saw—what’s that about?

Rods and cones. Back home I consulted Dr Google. She says the human eye sees Aurora mostly in whitish grey because its light is too faint to be sensed by our colour-detecting cone cells. It takes bright light for our high-res cone cells, concentrated in our central area of vision, to detect colour. Our rod cells in the periphery of our eyes detect fainter light at night, but only in shades of black, white and gray. DSLR camera sensors set with long exposure times and high ISO settings have a much higher dynamic range of vision in the dark than the human eye—which is why Aurora look so much more dramatic in photos. 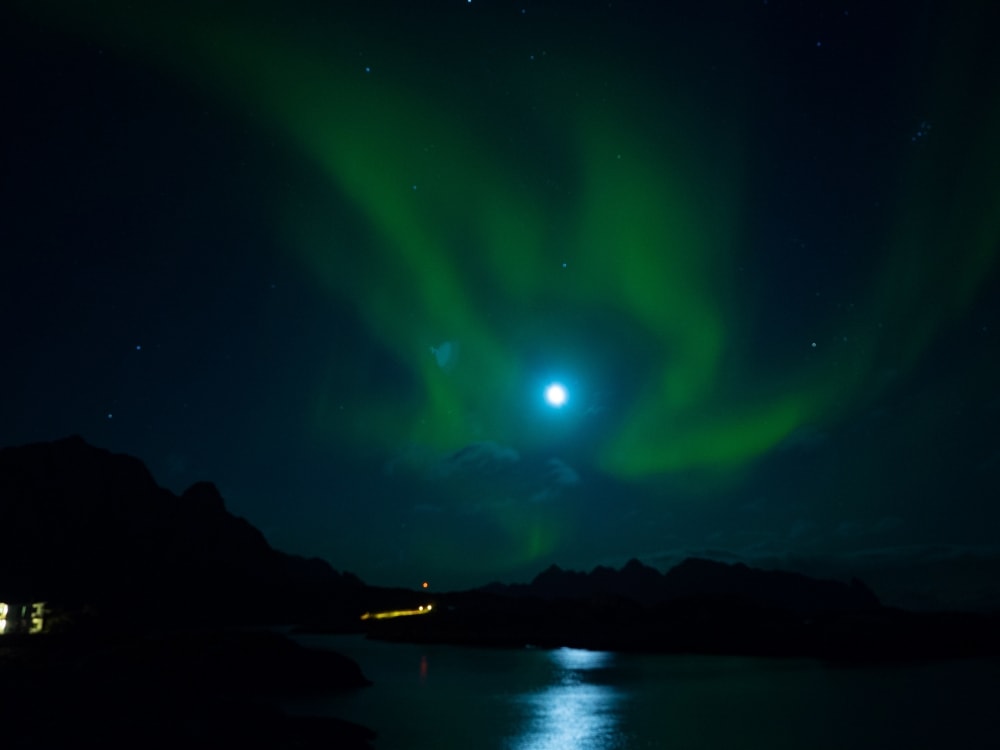 It doesn’t matter. Because Saturday night, September 21, we watched the sky unfold in bands and swirls of white—to my naked eye that is. When I looked through our camera—vivid green.

A fifth person joined us, a guy whose camera suggested he might be a professional photographer. Mesmerized, we watched in reverent silence.

After a few hours of moving our camera every few minutes to catch the show, the Aurora activity began to dissipate, the cold night air began to stiffen our joints. Just before midnight the others packed up and left.

“Let’s give it a little longer,” Magellan said.

All of a sudden the Aurora began dancing a halo around the moon! A Green Grail, caught on our camera, probably the most treasured memory of our five weeks in Norway.

“So you didn’t see any green?” Magellan asked me as he was assembling the Aurora video (a formidable task).

He had—and he’s colour blind, had 20/800 vision before glasses, contact lenses and laser eye surgery plus he’s had cataract surgery.

“But you saw green Aurora in Saskatchewan?” he asked.

Clearly (okay, more like dimly), my jubilado cones have aged into oblivion or just wouldn’t come out to play that night…but through a camera lens, the sky was alive with the Green Grail.

Jamie, Kathleen. Here’s a beautiful quote from her book Sightlines:

Luminous green, teal green, the aurora borealis intensifies against the starry night like breath on a mirror, emerald veil with a surge it remakes itself into swizzle charged particles eighty miles up.

“In cod we trust”

The Nor Way
12 replies

The Nor Way
Scroll to top