"I scarecely knew how pleasantly the moments were falling until now when looking them over through the telescope of years." Annie Dillard

Every summer (almost) since 2004, our nuclear family of five and Sophie (the non-standard Standard Poodle, may she rest in peace) rented a house on Pender Island in southern British Columbia for the last week in August before our granddaughter returned to school. And here it is, the last week in August. No ferry booking, no Seadrift house-rental confirmation, no Fall Fair catalogue, no celebrating Magellan’s birthday on the sylvan island of South Pender. Last year may have been the last time. I don’t know.

I do know we all remember our first holiday on Pender. Opening the gate. Driving down the hill to the high-bank oceanfront. Glimpsing Ainslie Point, its clerestory windows above the entrance introducing us to its brilliant architecture. Commanding two acres on a peninsula, its L-shaped design and large windows filled the space with light and views all the way up Bedwell Harbour and back to Medicine Beach. “This is the best place ever,” seven-year-old Clare exclaimed as we got out of the car. 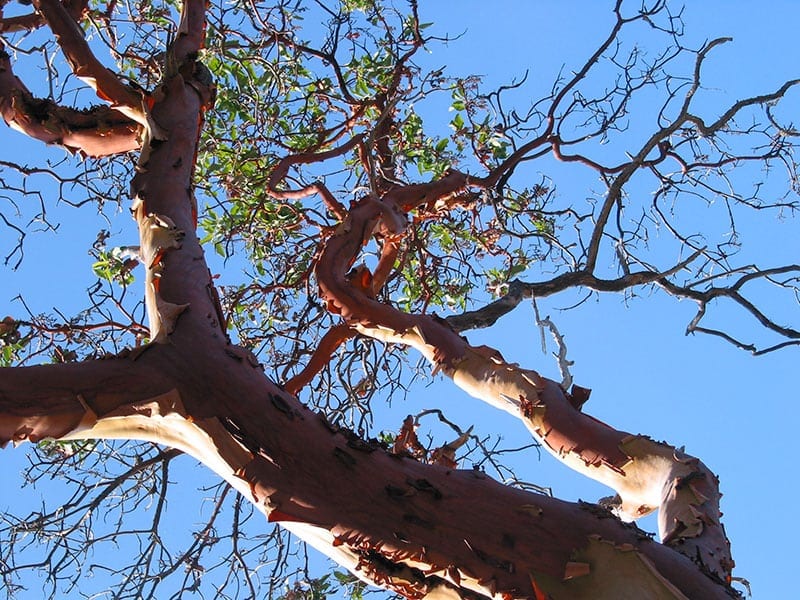 An arbutus tree, its sunburn-red bark peeling to reveal a smooth skin beneath

The stunning beach walk, despite the wasps, at Gowlland Point on South Pender

When I remember it now, a decade later, it’s the buttercup-yellow chair in the living room I picture, a metaphor for our butterfly life at Ainslie Point where we fluttered in the sunshine from one sweet activity to the next for four years.

Going to the annual Fall Fair to see Border Collies vying to win the sheep-herding competition and red ribbons on a plenitude of harvested produce and home baking. Hiking Oak Bluffs with its views to the San Juans followed by the open house at Charman’s garlic farm and the art show on Trincomali. Hiking up Mt. Norman to Beaumont Marine Park with Sophie tugging at her leash. Bicycling to Poets Cove alongside the fields on Spalding Road. Beach walking the sawtooth rocks on the Clam Bay loop. Trailing the deer at Fawn Creek, the little forest park minutes from the front door. Golfing at the island’s course and off the mat on the grassy escarpment below the house. Watching US Open Tennis. Flipping through our thick assortment of magazines. Warding off the wasps, as attracted to Gowlland Point as we were. Deciding (Lynn, not Magellan or Ward) between the Apricot and Ginger Lamb Burger or the Quinoa Bowl at Hope Bay Café. Watching Perseid meteor showers on the deck. Creating night phosphorescence by tossing rocks off the dock. And catching up with Lynn—”Tell me about…”

I remember conversations with Clare, reminiscent of Sophia and her grandmother in Tove Jansson’s The Summer Book, such as this one from a 2004 diary entry: “I’m not sure jellyfish are really fish,” Clare said. “Maybe it’s like koala bears. You didn’t know they were marsupials until I told you.”

Only the growing imminence of our Sunday departure marred our larksome days on Pender.

And yet the highlight, every year, was being on the water.

Magellan and Clare on an early voyage

Sad to leave Pender, Sophie would lay down and put a paw over her head

A girl and her dog. "We're sisters," Clare used to say

Lunch, one of our favourite times of the day

Near Port Browning Harbour; get there around noon on Saturday if you want to buy fresh crab off the boat

Magellan and part of his relay team readying or the 16 km circumnavigation of South Pender, August 28, 2014

Now we see them, now we don't. Magellan and Clare in the churning sea rounding Tilley Point, a tricky part of the kayak relay around South Pender

For the first three summers we rented kayaks for day trips or arranged guided tours, supplemented with excursions in the dinghy we dragged from the owner’s garage.

This might be a good time to describe my feelings about open water.

However, anyone who’s been around Magellan knows he has a knack for coaching others to push their limits. And so it came to pass that we took kayak lessons, did a guided trip in the ocean around Tofino and bought an Innova, an inflatable double kayak.

Magellan began to slide this phrase into family conversations at Ainslie Point (after the rest of us had had a glass or two of wine), “We should kayak around South Pender.” Words that began to appear as regularly as the tide. I’d read warnings of the hours it takes, the strong winds and currents, the narrow gap at Blunden Islet. Lynn was encouraging. “Yahoos are us,” Ward would say. Clare was silent.

We didn’t have to talk about it the following year. Late in June we got a call. Ainslie Point had been sold. We should have recognized the foreshadowing in a diary entry from the previous summer: “The place looks just as good, except for the broken gate, torn fences, barren kitchen and damaged oar lock on the dingy.”

Nothing comparable was available on Pender, so we booked a place on Desolation Sound. It lived down to its name. “We kayaked to Cochrane Bay, about 1½ hours each way midst weather of all sorts: rain, wind, standing waves, thunder, sun, current going in/out,” the diary revealed.

We kept our eye on vacation homes on South Pender and found Seadrift. “None of us ever imagined we’d find a replacement home comparable to Ainslie Point—but we have. In fact the votes favour Seadrift because of its outstanding amenities: ping pong, DVDs, saffron, foosball, books, 42” HD TV, dog towels…“ says a diary. What wasn’t in the kitchen was in the garage (like multiple sizes of cake pans) and if it wasn’t and you asked about it (like crackers to smash crab legs), Jim and Jenny had it there next year.

I breathed a sigh of relief re kayaking around South Pender, wistfully, as for the next few summers Magellan was preoccupied with work six hours a day. Also, Ultimate had become Clare’s favourite sport so kayaking was competing with Pender’s Golf Island Disc Park, considered one of the best in Canada.

Then Magellan retired. Now he had time to read about circumnavigating South Pender, study tide tables and repeatedly discuss convincing aspects of the voyage months before August at Seadrift. He also replaced the double kayak with two, single inflatables of the same brand.

And he came up with a brilliant idea that got us all on board: “We’ll do it in relays. I’ll be in one inflatable for the entire trip and each of you can choose the section you want to paddle.” It was a well-planned adventure—as you can see from his detailed description.

Magellan: For several years I wanted to circumnavigate South Pender. Lynn was supportive but the others were not. Reports varied from it being a fantastic paddle to being dangerous if you got the tide or weather wrong, particularly at Tilley Point and between South Pender and Blunden Islet.

We launched east of Mortimer Spit at 9:10 a.m., timed to reach Tilley Point at slack tide at 13:06 PDT. Spice and I headed counter-clockwise, rounding the Spit and paddling in glassy conditions under the bridge that separates South and North Pender. However, rather than coasting with the ebb current, we were soon fighting wind-driven waves. From his deck, a fisherman who had been out that morning on Swanson Channel advised, “It’s rough out there.”

Spice passed the baton (paddle) to Clare for the journey from Poets Cove around Tilley Point. We flew down Swanson’s Channel, the waves and current pushing us. Through the thin fabric of the Innova kayaks we could feel the ocean’s stomach churning as the waves were reflected from the nearby rocks. We reached Tilley Point too early, meeting with confused seas where Swanson’s Channel collided with the waters of Boundary Pass. Rather than attack the waves in our inflatables, we hung out in a kelp bed for 30 minutes until the wave height dropped a foot.

Around the corner, Lynn took the baton for an easy paddle to Gowlland Point in calm seas without wind. We peered at beach homes from the water, speculating about a permanent retreat on Pender.

Ward joined me for the paddle home to Seadrift. The flood current was starting to pick up. As we neared Blunden Islet, baby haystacks popped up around us, playfully throwing water into our laps through the unsecured cockpits. The paddle in Plumper Sound was calm, a slight headwind dampening the benefit of the flood current below us.

Overall, it was a great trip, warranting the rental of kayaks for each of us if there’s a next time.

It’s the last week in August. Soon, Clare is voyaging east, to King’s College in Halifax. Was 2014 our last family holiday at Seadrift? Our first, and last, circumnavigation of South Pender? I don’t know. In the end, I know that everything, and nothing, lasts. And the best recourse I know for that is encapsulated in this poem by Gwendolyn Brooks:

Exhaust the little moment.
Soon it dies.
And be it gash or gold it will not come
Again in this identical disguise.

Blood Star Gallery  Susan inks tender little drawings of birds, mounts them on a wooden cradle and lacquers them with resin.

Charman Farms Many varieties of garlic bulbs and braids.

Disc Golf  Wooded and steep, 27 ‘holes,’ a cool place to play for free (bring your own discs, scorecard and pencil).

Everything You Wanted to Know About Pender  An historical Handbook.

The Fall Fair What community really means. An annual event since 1964, each Fall Fair has a theme. (We missed “The Fairest Flowers o’ the Season this year.”) You’ll find a cornucopia of produce, cakes, pies, livestock, quilting, knitting, art, bands, a parade, a kids’ section, a beer garden, a beef barbecue…

Golf  Arrive early and put your cash for the round in the envelope.

The Hope Bay Café A cheerful place with consistently good food and beer and wine, plus nearby shops worth a look.

Innova Kayaks Made in Czechoslovakia and sold in Burlington, WA, their big advantage is ease of storage and transport.

Poets Cove The editors in our family wonder, was there a poet or a group of them?

Seadrift  We have much gratitude to Jim and Jenny for having created such a warm and inviting 5* home renters can enjoy. A chef’s kitchen, (yes, you’ll find saffron, a milkshake machine, dishes for a party of 50…), firm beds, libraries of books and more than 3,000 DVDs (Wallace and Gromit), a large assortment of designer napkins and a huge garage so organized you will find the bicycle pump, and, last year’s new addition—a lap pool!

Southridge Farms Fresh corn, Island produce and lots of other goodies at this country store.

Spalding, David and Andrea. Montgomery, Georgina. Pitt, Lawrence. Southern Gulf Islands of British Columbia. Canmore: Altitude, 1995. An  intro to what’s special about Pender from the perspective of four Island residents. David has a book we haven’t read yet, Put That Damned Old Mattock Away, published in 2013 by Printorium and available at Talisman Books.

The Pebble: A Love Story

Travel Insurance: The Big Print Giveth and the Small Print Taketh Away