“…nude with rock…bones of the earth brought to daylight”

Beginning by introducing himself and sitting down on a chair on the porch of the Seven Wives Inn in St. George, Utah, Russ surprised us when he announced the destination we’d be going to.

Let me take a step back. It’s very unlike us, but we had no travel itinerary for Utah on our drive back to Vancouver after a month in Palm Springs. No four-wheel drive, no hiking permits and no accommodation. In the last days of March, Magellan, sensing the futility of our non-plan, said, “What do you think of this photograph/hiking tour?” Alas, it had been cancelled. Then photographer/guide Russ Norstrand called to say that if we could meet him the following Thursday, we had ourselves a private tour.

“Tomorrow we’ll go to Grand Staircase-Escalante National Monument,” Russ said. “We’ll spend our first two days there. It’s my favourite area in Utah and I think it will be the highlight of our trip.” It turned out to be more than that—it was the best holiday of Latitude65’s first year.

Ascending in full darkness early the next morning, Russ at the wheel, we headed up toward the wilderness. Only two paved roads traverse the vast Grand Staircase-Escalante. Building the shortest one, only 124 miles, took four decades—now it’s rated the second-most scenic drive in the world.

Toward Page, Arizona, on Highway 89

A date with the sunset at Horseshoe Bend

Horseshoe Bend, near Page, Arizona, in the southern steps of Grand Staircase-Escalante

The Colorado River takes a turn

A good intro to canyon dayhiking, Wire Pass is much wider than its name implies

This eight-foot chokestone can be tricky

Petroglyphs at the confluence of Wire Pass and Buckskin Gulch

We explored a little of Buckskin Gulch, a 16 mile backpacking hike with walls corkscrewing hundreds of feet into the air

Russ has the hat for Lower Calf Creek, a canyon corral for pioneer ranchers

Two giant steps to the top

Upper Calf Creek Falls is more remote (off an unpaved and unsigned road), which means that like us, you may have it almost to yourself—even during spring break

“All told there is hardly enough covering to hide the anatomy of the earth” John C. Van Dyke

The first blush of sunrise 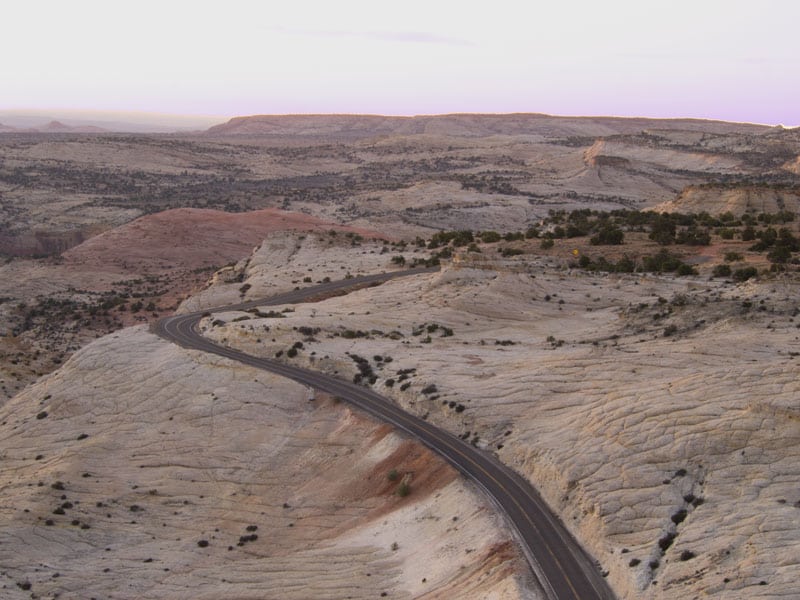 The second most scenic highway in the world, Highway 12, the "Million-Dollar Road" between Escalante and Boulder completed in 1935

Magellan was happy to have river shoes for this hike

The Escalante, the last river to be discovered in the US

Trail directions to petroglyphs near Slot Canyon Inn: "Park across the road from the rusty tin can on a string, if it's still there"

Our time here, so brief, so full, grabbed hold of our heart strings, every memory pulling us back to this place. Escalante’s shallow waters flowed through our river shoes as we stepped among the rocks, dipping from one bank to another searching for the photo. Cottonwood leaves, new and green, were sticky with the smell of spring. Planning our hikes around the optimal times for photography, Russ ensured we viewed Lower Calf Creek Falls when it was sunlit, then shadowed. We walked on slickrock, Navajo sandstone smoothed and blanched to creamy white. We got stuck in Spooky, a serpentine slot canyon—so claustrophobically narrow we had to turn sideways—on a spring-break weekend with hundreds of kids racing through. I dream of the breakfasts at Slot Canyons Inn: home-ground whole-wheat bread topped with homemade prickly-pear jelly pink as wild roses. And dinner at Utah’s Chez Panisse, Hell’s Backbone Grill, where we ate posole (large, white, dried-corn kernels plumped in a broth with lamb seasoned by juniper) and the signature dish, Cowgal Meatloaf. And the photography—we had a standing date with the sunrise and last dance with the sunset, landscapes of abundance and absence. Wonder full.

Russ pointing out where the land cracks open to reveal bygone estuaries of the Escalante River, now gulches to hike: Dry Fork Coyote, Peek-a-Boo and Spooky

A lizard marking his territory by doing pushups

Stuck on each other, the bird and the elephant form Metate Arch in the Devil's Garden

Contemplating the grandeur, every step of the way

Searching to describe why this was the best holiday in Latitude65’s first year, I thought about the Slot Canyons Inn, where in a leather-bound book standing alone on a prominent shelf, I found the words of Edson Alvery, the first recorded observation of the area, written in 1872.

“It is the extreme of desolation, the blankest solitude, a superlative desert…a maze of cliffs and terraces lined with stratification, of crumbling butts…rock platforms gashed with profound canyons… flooded with blazing sunlight… a sublime panorama…”

After a pizza dinner at Escalante Outfitters in the area’s biggest town, population: 1,000, I searched a Utah guidebook to see what Kathy and Craig Copeland had to say about the area:

“…it affords as beautiful an experience as it’s possible to have, not just in canyon country, but anywhere on earth.”

I looked to Terry Tempest Williams, author of a book honouring this year’s centennial of America’s National Park Service. Even she, a highly skilled poetic writer, says, “I have found no subject to be as intellectually challenging as writing about wilderness.”

Would music, I wondered, be a step closer to describing the majesty of Grand Staircase-Escalante?

From their album The Endless River, Pink Floyd’s “Side 1, pt. 2: It’s What We Do” is the closest anthem we could find for the reverence for life Grand Staircase-Escalante National Monument inspires. Retracing our footsteps and planting new ones, our quest to discover more of this awe-striking space will continue next spring.

In his trademark Stetson, Russ Nordstrand at Backcountry Journeys will take you through the steps to a good photo: location, timing, composition, settings, patience, repeat.

Childs, Craig. The Secret Knowledge of Water. New York: Back Bay Books, 2000. Like the paradoxes of the desert rippling off the page—from thirst to drowning—his writing is a paradox of spirituality and hard-core adventure. (The quote in our feature photo and in P6 is his.)

Scenic Highway 12 ranks second in the world for beauty, only a step below State Highway 94 in New Zealand connecting Te Anau with Milford Sound.

McRae, W.C. & Jewell, Judy. Utah. Berkeley: Avalon Travel Publishing, 2015. A trusted resource in the Moon family of guidebooks. We used it when we were on our own in Escalante for our stay in the Page. Arizona, hiking Wire Pass, visiting Kanab and driving to Capitol Reef National Park.

Slot Canyons Inn: Here on this secluded property, a wilderness environment and genuine hospitality converge. We will post its story here one day.

Spalding, Blake and Castle, Jennifer. With a Measure of Grace. Santa Fe: Provecho Press, 2004. Jen Castle and Blake Spalding’s Hells Backbone Grill is named for the bridge that opened Boulder to automobile traffic in 1933. Their recipe book, delivers recipes with bold flavours, a result of Jen and Blake’s deep commitment to their organic restaurant with its six-acre farm, straw-bale greenhouse and heritage hens—in Boulder (population: 222), not Berkeley. UPDATE: See the fantastic article “Food Fight” by Kathryn Schultz in The New Yorker, October 1, 2018, for more about Blake and Jen and what they are doing “at the remote outpost of the resistance” to Trump’s devastating order to cut 85% of Grand Staircase-Escalante.

Williams, Terry Tempest. Red, Passion and Patience in the Desert. New York: Pantheon, 2001. Her new book, The Hour of Land, honours the centennial of America’s National Park Service in 2016 and is one of the best books I’ve read this year.

“Feel the gladness of the May”