“I cook, therefore I am,” says Jenni.

About three-o-clock every afternoon these days when Vancouver’s grey skies darken toward charcoal and heavy rains pummel our flat roof, I need a cookie.

The urge is as strong as when I was a kid getting home from school in the subzero cold of Saskatchewan and wanting mom’s warm “matrimonial cake,” gooey dates sandwiched between buttery rolled oats.

Sorry mom, your recipe has been superseded. But when you find out by what (Date Oatmeal Cookies) and by who (Jenni Willems), I think you’ll be okay with it.

Plenty of wags can open an exposed brick hotspot in Vancouver’s Gastown and generate some buzz. So far we’ve only come across one—the ever-passionate Jenni Willems—who can do it in Birch Hills, [Saskatchewan!] pop.1,000.” So said Western Living magazine when they named Jenni one of Saskatchewan’s “2011 Foodies of the Year.

My mom was living in Birch Hills at the time, but I first heard about Jenni from Aunt Ethel. “We finally have somebody in this town out looking for stories for the newspaper, somebody who can write, too,” she said. That was in the 90s when Jenni, with a young family, turned to freelance writing and confined by time, restricted her real passion—cooking—to selling her baking, specialty coffees and soups at farmers’ markets and craft sales. In 2006, she made an offer on a 100-year old brick building and opened the New Ground Café, which soon attracted attention province-wide and beyond. Magellan and I made certain we ate there every time we visited mom.

New Ground Café (with a chalkboard menu even!) was the first place I tasted Haskap berries (in ice cream with a sauce to match), pizza dough enriched with Saskatchewan Red Fife flour and topped with a luscious Alsatian-onion-tart-like filling and bites of roasted new potatoes, local lentils in a vinaigrette over farm lettuces. How I’d like to have tasted her tomato rhubarb gazpacho, Parmesan flax crisps and crab apple popsicles. People thought it was chocolate chips she added to her chocolate ice cream but it was a prairie protein—black beluga lentils. Jenni’s innovative low-cost comfort food earned her an invitation to Slow Food’s Terra Madre symposium in Torino, Italy, in 2008. “Look at this,” she said one summer day in the Café as she showed us her photo album of the trip. Reaching out, she worked with the agricultural community on new hybrids like Haskap berries, hosted live music and art displays and held special dinners with seasonal tasting menus.

“She grew up in the bush you know,” said Aunt Ethel. Jenni’s grounding in local foods began at Lamp Lake north of La Ronge where her family lived in a small cabin. At a young age, she foraged for wild plants and berries in the boreal forest and began experimenting in the kitchen. Her first venture as a cook was in grade 9 when she and her friends opened a hamburger stand at the La Ronge airport.

One cold December morning some of our family had a Christmas brunch at the New Ground Café, sadly, its last, as Jenni sold her restaurant the following year to focus on catering. Someone had called in sick so Jenni’s young daughter was chief waitress and there was no one to make caffè lattes. “I’ll make coffees for you. I’ve used machines like this,” Magellan volunteered. “I can’t let you do that,” said Jenni, “you’re a guest. Besides, we’re almost out of milk.” Minutes later, Magellan returned to the restaurant, cartons of milk in hand, and got to work as a barista. Jenni gave our table free caffè lattes and a copy of a hand-written cookbook she’d assembled. I was touched when years later I found this in the Birch Hills Gazette:

It is from this little limited-edition cookbook that we are gifting you today’s recipe for Date Oatmeal Cookies. As you’d expect from Jenni, the cookies are creative and comforting. Golden brown and not too sweet, they stay quite soft and their taste is perfectly balanced by the date filling. I smile every time I read (and follow) Jenni’s cucina povera directions. “Zest orange into pot with dates + 4 cups coffee. (Jenni calls coffee “the secret to my life.”) Squeeze as much juice as possible from the orange. Eat the rest!” 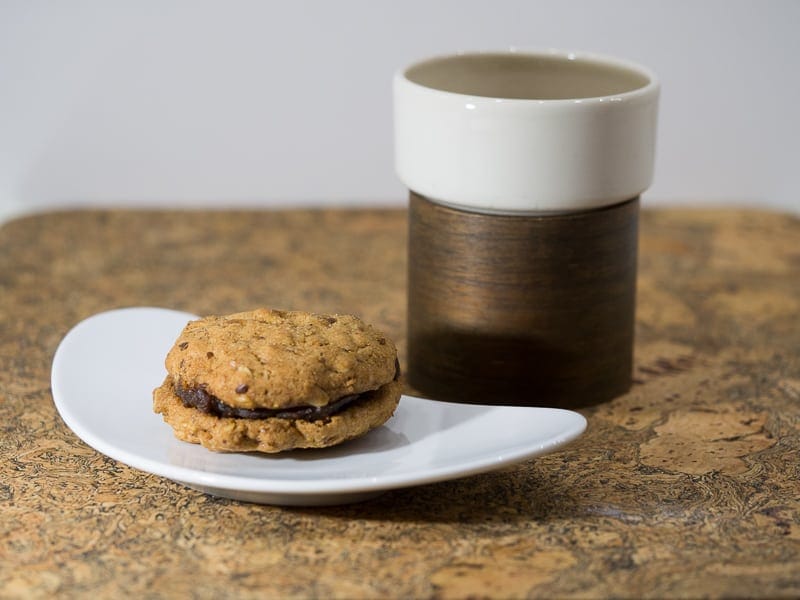 A perfect way to pick up your winter afternoon

"A" cookie is not enough! But to be fair, half of this week’s batch of cookies flew to our granddaughter Clare in Halifax

Mom no longer lives in Birch Hills. New Ground Café underwent a name change accompanied by underwhelming food but it’s back on track now as The Birch Café, run by two Asian couples with culinary experience who clearly know what they’re doing based on the three meals I ate there (B, L & D in one day!). Jenni (now Jenni Schrenk) has moved to Saskatoon, was Chef in Residence at the Saskatoon Farmers’Market for a few years, operates a catering business, competed as one of Saskatoon’s Top Chefs in the Gold Medal Plates 2017 (she won Silver) and does a lot of work at The Local Kitchen, Saskatoon’s first food-business incubator—mentioned in Food and Wine magazine last September in a story called “Canada’s Hottest New Food City Is Where You’d Least Expect It!”

The last time I saw Jenni, in her Café in Birch Hills, she told me she was working on a book of autobiographical short stories with recipes. You can order Season from her website but in the meantime, make a batch of these prairie cookies to sweeten a winter’s day wherever you happen to live.

Save Print
Prep time
45 mins
Cook time
12 mins
Total time
57 mins
Lightly adapted from a recipe by Jenni Willems (I found 2½ cups of coffee instead of 4 cups was enough, I grind the flax and make the cookies a bit smaller), these golden brown goodies have a soft crumb and delicious taste.
Author: Spice
Ingredients
For the Filling
For the cookies
Instructions
For the Filling
For the Cookies
3.5.3229

You can order Jenni’s cookbooklet Season ($15) from her website. “I had my book almost done when my laptop was stolen from my vehicle and I’d only saved half my work. Bought a 1940’s typewriter and typed from memory, then scanned the pages and had it printed here in Saskatoon. My husband did the cover art.”

To see Chef Jenni in action and learn how to make Chipotle Beluga Lentil Dip with Bannock, watch this clip from CTV.

The Mary/Tyler Show at Windy Bay

Spiralling Thoughts on the Prairie Highway