“We’re trying for the experience we had in Seville with you guys,” said Pat this week describing a trip he and Dallas are planning to Budapest and Vienna. “That apartment we rented was so great.”

Readers of this blog may recall that we’ve talked about our trip to Seville with Pat and Dallas before: the bar Casa Anselmo at midnight, the masterful art of Velasquez and the Spanish gallantry we experienced at our anniversary dinner. But we haven’t told you about the apartment we rented.

First, the city itself. Lonely Planet, based on recommendations from a panel of experts and suggestions by travel writers, editors and bloggers, has declared Seville the top city in the world to visit in 2018.

The design of Metropol Parasol, six parasols in the form of giant mushrooms, was inspired by the vaults of the Cathedral of Seville and the ficus trees in a nearby plaza—and is the largest wooden structure in the world 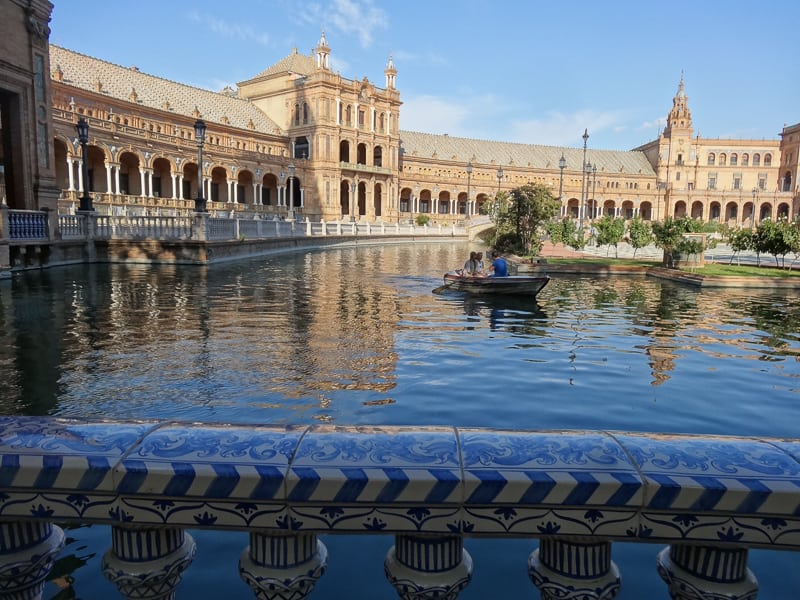 For scale and grandeur, the massive Plaza de España is Seville's most impressive building after the cathedral

One of Seville's many gorgeous statues, this one on the government building Juan de Andalucia
(Photo: Pat—looks like your first travelling companion Bob doesn't it Pat)

The Triana Market named after the Roman emperor Trajan

Four hundred years ago when Cervantes was writing Don Quixote this Andalusian capital was the centre of the world. To see Seville is to be seduced by its exquisite beauty, warmth (it’s Europe’s warmest city, temperature-wise too) and perfect size for exploring with a population about the same as Vancouver’s. Sevilla. When I hear those soft syllables, Se-bi-ya, memory and longing awaken. Writing in the New York Times this January, Luisita Lopez Torregrosa feels this way, too. “Instantly, from the first hour, Seville for me was all like that, a feast of the senses, the simplicity of daily life.”

“How perfect is this!” exclaimed Pat when we arrived. Perfect, a word we used often at apartment Archivo de Indias III (so named for its view of this famous building) at 14 Miguel Mañara.

The girls win by walking up the stairs instead of taking the elevator. Again! Every time!

Great little kitchen once you figure out the child-safety lock on the induction range
(Photo: Genteelhome)

The apartment wasn’t fancy or costly—there’s a much nicer one on the top floor but it was booked months in advance—location was its star quality. Not only is it in the enchanting Barrio Santa Cruz where cobblestone streets curve between pale-coloured villas with bougainvillea cascading off wrought-iron balconies—14 Miguel Mañara is right between the Golden City’s two famed attractions: the Catedral de Santa Maria de la Sede, and the Real Alcázar. We could never get lost—all we had to do was head for the El Giraldillo, the enormous female bronze atop the Cathedral’s bell tower—as iconic in Seville as the Statue of Liberty in New York.

Pat heading to the "pregnant lady's café" for a second breakfast

The exterior of Archivo de Indias III, a former office building renovated into apartments in 2013

The view from Archivo de Indias III with its namesake, the Indias Archive building, to the right
(Photo: Pat)

Señor and the 'ritas
(Photo: Pat) 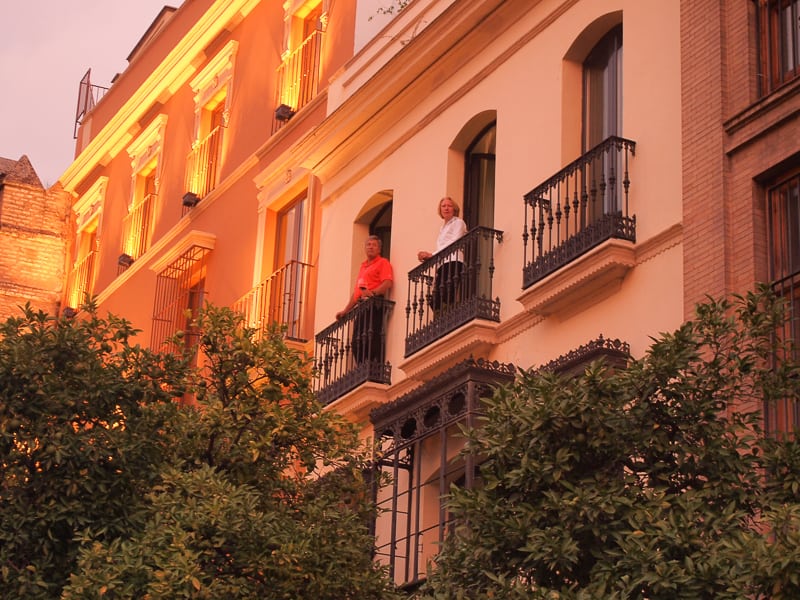 The golden city of light

You’d think Dallas’s last name was Columbus. Every morning when the Cathedral bells rang between nine and nine-thirty and the church opened to the public (offering free admission until ten o’clock before tour buses engorged the plaza), she’d say, “Let’s go look at Christopher’s tomb.” Each visit we discovered something new. A lion was licking the toes of a woman in Goya’s painting Santas Justa y Rufina de Sevilla. Another detail on one of 1,000 biblical figures in the Main Chapel’s altarpiece of blinding gold. That the bell tower was formerly the minaret of the Almohad mosque that was on this site during Moorish times. Living nearby and seeing it with so few people, we felt like it was “our” church. We could wander around on our own, enjoying an intimate experience in the world’s largest gothic cathedral, and the third-largest church in the world after St Peter’s in the Vatican and St Paul’s in London. In September!

Completed in the 16th century, the Santa Maria de la Sede is the largest Gothic cathedral in the world
(Photo: Pat)

Tradition has it that, when the cathedral's construction was approved in the 15th century, a priest said, "Let us build a church that makes people think we are mad"

The tomb of Christopher Columbus is held aloft by four allegorical figures representing the four kingdoms of Spain during his lifetime: Castille, Aragon, Navara and Leon

A glowing cathedral, within and outside

We only went to the Alcázar once. “Perfect,” Pat said again as we waited for only a few minutes with our 9:30 advance-entry tickets, scoffing at Dallas the Younger whose ticket was four times the cost of ours: jubilados pay only two euros, a bargain to see the oldest, active, royal palace in Europe with its romantic Moorish interiors and formal gardens. We meant to return for a night tour. Instead, we opened our balconied windows and listened to the music emanating from the Alcázar, or to the flamenco guitarist below us or the clip-clopping of horses’ hooves drawing antique carriages over ancient cobblestones. And watched the people. “I remember seeing some pretty juicy guys from our balcony. The view was great,” sighed Dallas. Until we closed the heavy steel shutters, and the only sound came from fingers tapping on devices, paging through novels, lifting that last glass of wine.

The courtyards and cloisters are covered with stories told in ceramic tiles, beautiful as decorations and an effective way of combating Seville's heat and humidity

Did I say Seville is synonymous with orange?

The lush gardens of this still-used palace

“Remember the pregnant woman at our coffee shop?” Pat reminded us, “and how worried Dallas was when the place closed for a few days? Then we found out she’d had her baby early and everything was okay.” We usually ate out, or had a second breakfast after fruit and yogurt at 14 Miguel Mañara. “The only night we decided to cook dinner was a Monty Python skit,” laughs Pat. “Yeah, not even an engineer could figure out how to use that induction range,” Magellan had to confess. After 20 minutes of trying to turn it on, we gave up and telephoned the “concierge” who explained how to bypass the childproof safety mechanism.

Every day in our barrio, Seville’s mime artists put a freeze on our flaneuring. We stopped, fascinated by their clever costumes, painted bodies and most of all the stillness of their poses. A young man about to strike a tennis ball. A guy miming a goat. Another portraying a jungle. But what kept drawing me back was a baby in her stroller sucking on a soother and smooching, “Baby wanna kiss. Baby wanna kiss.”

Every time we returned to 14 Miguel Mañara, the race was on. Pat and Magellan waited for the elevator while Dallas and I dashed up the stairs. You know who won, even though prizes were never awarded. Just being here, for a week, in Sevilla, that was the prize.

The apartment we rented in a prize location in Seville can now be booked through many sites, including this one.

In the Pink, Tracks
Scroll to top