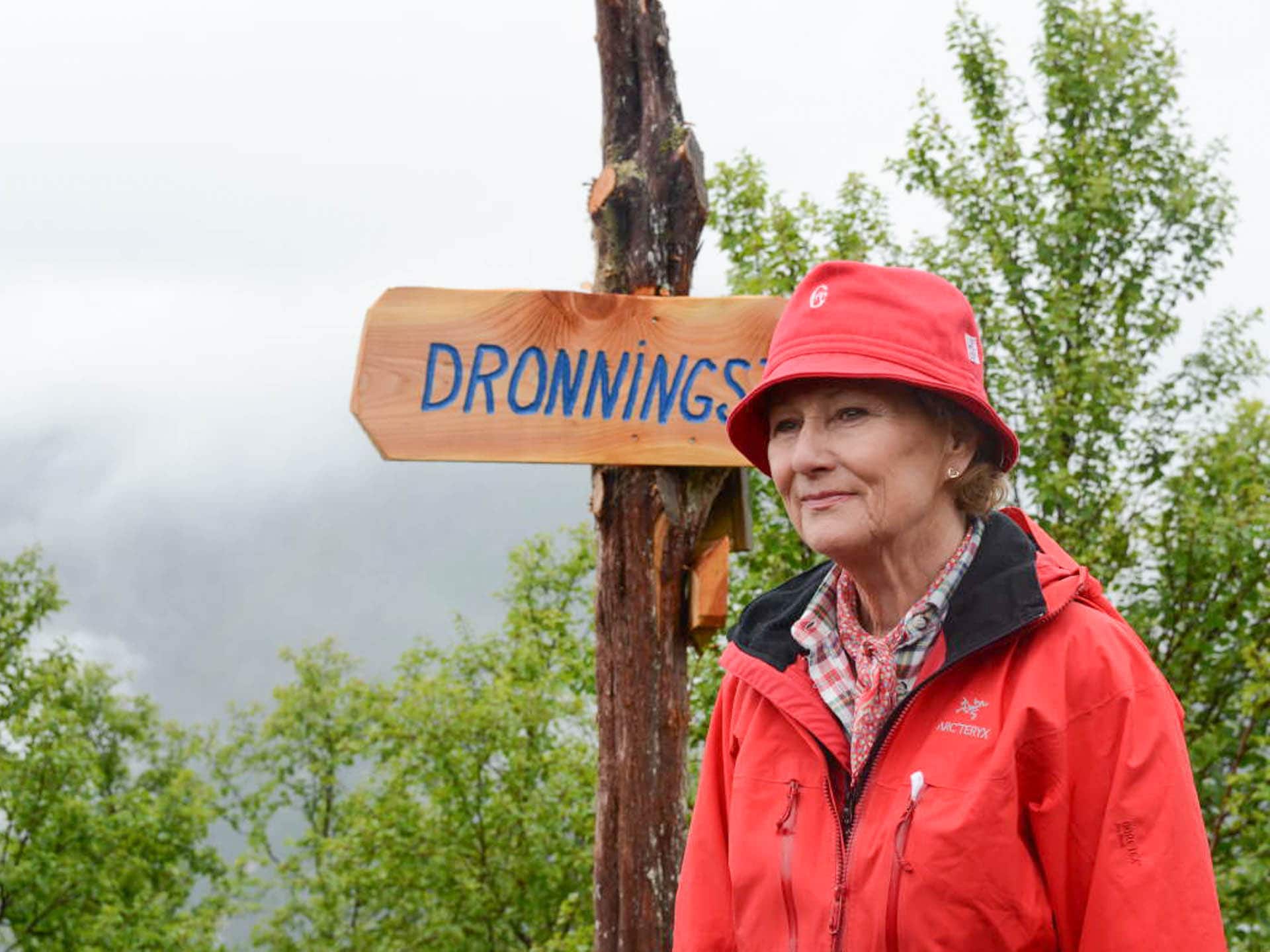 “In our family there is a story that repeats itself again and again,” Norway’s Prince Haakon said in a speech at the palace garden. “Let me use myself as an example. I arrive at a mountain cabin, let’s say one of the public DNT cabins, in the middle of nowhere, quite proud of myself for managing such a big trek, and I am greeted by cheerful hosts who say, ‘It’s so lovely to see you! Your mother was here a month ago.’”

His mother, HM Queen Sonja, is so renowned for her love of hiking that the Norwegian Trekking Association, (the DNT) made her an honourary member. Her son gave the above speech at the unveiling of a statue of Queen Sonja on her 80th birthday.

After hiking HM Queen Sonja’s Panoramatur Trail (The Queen’s Panoramic Hiking Trail, also called Dronningstien—in Norwegian Dronning means Queen), we can see why it is one of her favourite hikes and  bears her royal name.

Prince Haakon at the unveiling of a statue of HM Queen Sonja, April 7, 2017 in the palace park (Photo: Lise Åserud/NTB scanpix)

“Royal blue, the colour of this hike, this day,” I wrote in my diary. A vault of blue sky. Sørfjord, the longest and innermost tributary of Hardangerfjord, the deep blue “Queen of the Fjords.” Bluebells bowing to the earth. Wild blueberries, our second breakfast. The styrofoam blue of Folgefonna Glacier in the distance. Small alpine lakes colouring the landscape with pools of sapphire. The river Skrikjo, which translates as “Scream,” no doubt because if you fell into its glacial waters, you’d turn blue pretty quickly and start screaming. The wayfaring letter “D” for Dronningstien in blue marking this jewel of a hike.

The start of Queen Sonja’s hike though, was a royal pain.

A slog for three kilometres, four for Magellan. The hike starts at Røte but we were reluctant to continue driving our rented motorhome up the narrow gravel road to the trailhead parking, so Magellan backed it down while I waited for him. It could have been worse. A hiker who didn’t have a car started at Lofthus and walked 34 km round trip!

Queen Sonja does not lace her boots at the trailhead car park where Magellan started from. That’s because the official Dronningstien Trail starts farther along the forest road at Heng, 890 meters above sea level. But still, give her credit: Queen Sonja was 76 years old when she hiked the trail the summer it was given her name. We’ve read she usually helicopters in and that she also skis the Dronningstien Trail.

The official start is here at Heng, 750 meters above sea level

The 16 km hike (19 km+ for us) is rated difficult/expert/demanding, largely because it climbs 1,100 metres then descends the same. However, anyone with good endurance could do it. On the Sunday we hiked Dronningstien, so did about forty others. (Not to brag but since the king and queen were not hiking there that day, we were the oldest couple on the trail by at least two decades.) This stately trail is popular. August 1 was the first entry date in the logbook into which Magellan added our names and we were hiking group #1,090. And one can assume not every group bothered to sign in over that thirty-eight day period.

"I come into the presence of still water.
And I feel above me the day-blind stars
waiting with their light" Wendell Barry

The views are majestic, truly living up to the hike’s panoramic name. Sun gladdened the tussocks of grass. A jubilant autumn light filled the air. Adjacent to the trail is Europe’s most extensive highland plateau of which a third is Norway’s largest national park, Hardangervidda, 10,000 square kilometres.

A regal vista above the fjord that winds for 38 km

Perhaps another reason for Dronningstien’s popularity is the area’s mild climate, warmed by the Gulf Stream along Norway’s west coast. As the day progressed, the air grew soft and warm, September pretending to be May. Wildflowers held their heads high.

Wild blueberries in their prime

I wondered if Queen Sonja, like us, had wildflowers at her wedding. She and King Harald V were married a year before we said, “I do.” But they had a rocky start.

The royal family prohibited Prince Harald from marrying the woman he had been secretly dating for nine years. The reason? They didn’t want a morganatic marriage (a marriage between a noble and a low-ranked commoner); that could mean practically ending Norway’s royal line since he was the sole heir.  Sonja was a commoner, the daughter of a cloth merchant and she herself received a diploma in dressmaking and tailoring (as well as degrees from École Professionnelle des Jeunes Filles in Switzerland and the University of Oslo in French, English, and Art History). Prince Harald told his parents if her couldn’t marry Sonja he’d never marry. Fearing an end to the family’s reign, they finally allowed him to  marry his beloved. Their wedding date was August 29, 1968—Magellan’s 20th birthday, although I don’t suppose they chose the happy date for that reason…

This late in the hiking season the tundra was not marshy

Munkatreppene Slepa, built by the monks at Opedal who carried rock up the mountain and fitted it into steps

The stairs cover about 50 metres of elevation to Nosi, a rock shaped like a nose

As you’d expect, this majestic area has been popular for centuries. The hike follows one of many prehistoric  hunting and trapping trails on the Hardanger plateau. Herds of wild reindeer and wild goats can still be seen on the trail, if you’re lucky. The village of Lofthus where the trail ends was once the home of numerous Viking settlements. On the hike’s descent are the Munkatreppene Slepa, 616 stone steps built by English monks over the course of 300 years beginning in 1210. Some say these monks taught the locals to grow fruit: sweet plums, juicy apples and morello cherries. Today, half a million fruit trees thrive here.

More than 20% of Norway's fruit trees flourish in this area

After 19 km with the temperature at 17°C, we were ready for "iskald eple juice"

By the time we reached the apple orchards above Lofthus, we were ready for a late-afternoon snack. I went scrumping (taking fruit without permission) for the juiciest-looking apples. Delicious. At Knaves juice stand, waiting for the shuttle to take us back to Røte, we crowned the hike with bottles of cold, refreshingly tart apple juice, the taste worthy of a Royal Warrant of Appointment. 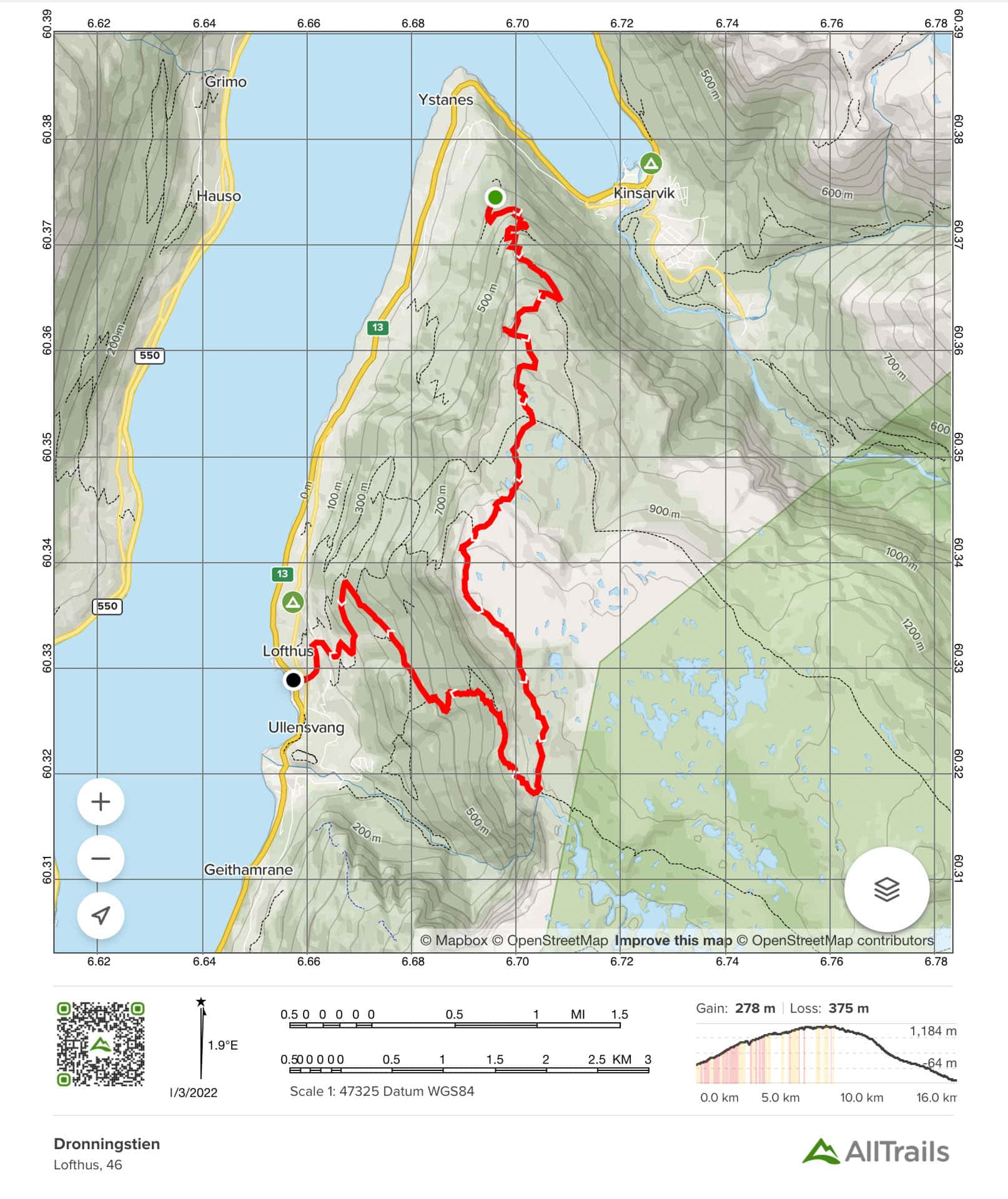 Highway to “Paris of the North”