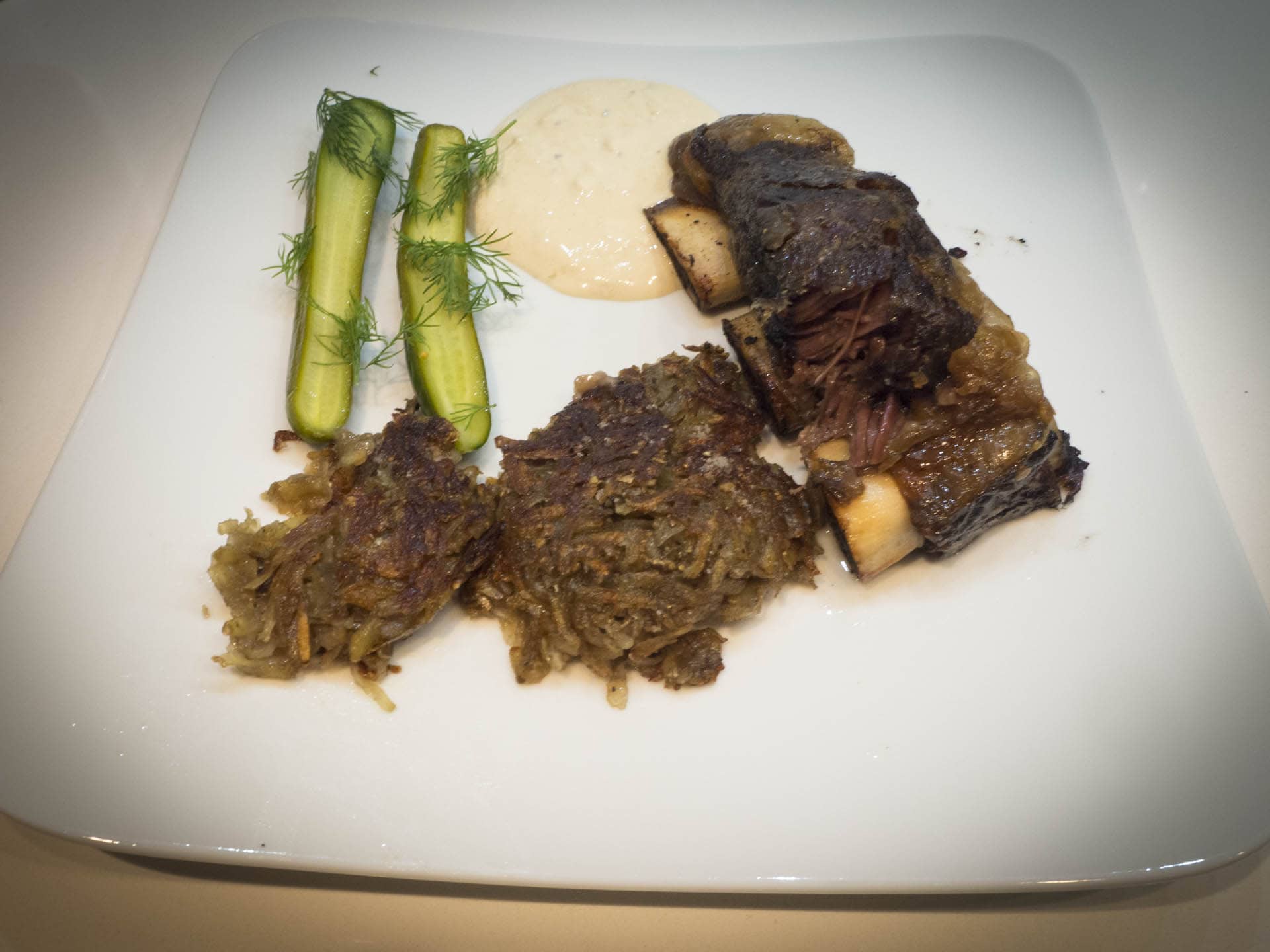 Magellan and I feel a tradition coming on.

Magellan and I feel a tradition coming on.

I’d never heard of the restaurant Dabbous in London until I opened last year’s Christmas present from Lynn—gorgeous and artful— Dabbous The Cookbook.

Ollie Dabbous opened his eponymous restaurant in London to rave reviews. The renowned Sunday Times food writer A.A. Gill skewered most of the restaurants he reviewed. But not Dabbous

Occupying an urban space in London’s Fitzrovia, Dabbous has stunned critics and diners since it opened in 2012. Behind the sheet metal door, acclaimed chef Ollie Dabbous creates light, modern European (small) dishes that are both sophisticated and delicate, in stark contrast with the restaurant’s industrial decor. The food is kept so close to the soil, the hedgerow, the pool and the tide, but is still as romantic as a fairy ring…. Each of us were properly, lovingly, unforgettably gobsmacked.

Right away I knew the recipe that I wanted to try first. Barbecued Beef Short Rib, Mustard & Molasses had me salivating and rushing off to Market Meats.

Several of our friends (sorry!) can attest to the stringy, chewy short ribs with green, pink, black and white peppercorns that I served one night. Magellan has eaten far too many oven-baked short ribs that, while tasty enough, fell off the bone into a sauce that never reduced and refused to thicken even with the addition of flour, cornstarch or arrowroot.

As soon as I saw Ollie’s method for cooking short ribs I was hooked.

1. Trim away any excess fat from the beef ribs and season well all over with fine salt. 2. (He offers a sous vide method but knows most of us don’t cook that way) so he writes, ‘Alternatively, wrap in foil and cook overnight in the oven at 140 C/Gas Mark.’

Before you go to bed, two more things. Make the dill pickles and set the yogurt in a sieve lined with cheesecloth in a bowl in the refrigerator to drain. Then all you have to do the next day is stir the ingredients for the mustard and molasses sauce and grill the short ribs for a few minutes to heat and brown them. (BTW: consider cooking a whole lot of short ribs overnight, then strip the meat from the ribs you don’t use for dinner and use it for a ragu or shepherd’s pie.)

Ollie’s recipes are designed to be part of a seven-course tasting menu. However,  I’ve found (yeah!) that his recipes are perfect for two people.

But let’s have a party. At my ideal dinner party, six guests are seated at table so I’ve reworked this recipe accordingly. Although Ollie’s recipes are presented in metric units, I’ve changed them to imperial measurements.

Serve each guest a short rib, two dill pickles and a large dollop of the mustard and molasses sauce along with a colourful veg, like a squash puree or roasted beets. Or go for the comfort of mashed potatoes. As you can see from our photo, although it’s not artistic, I opted for the crunchy goodness of rösti. Follow this with a refreshing green salad and, if you’re tempted, buy the cookbook and make that Blood Orange, Olive Oil & Marjoram dessert.

Make this recipe and  travel vicariously to London and with Brexit favouring our dollar, maybe we should consider the real thing.

Check out the restaurant and cookbook Dabbous here. Since the debut of Dabbous in January, 2012, Ollie has opened Barnyard and in 2017 he will add Henrietta to his culinary repertoire. UPDATE: Dabbous will close in June 2017.

Here are reviews of the Dabbous restaurant from The Independent, The Guardian and The Financial Times. The latter did a Q&A with Ollie that gives you a sense of the personality behind the stove.

Above the Food Chain
Scroll to top