“Look at the cute guy in the siwash sweater,” said my friend Chon. “Hey, he’s coming over here. And I bet he’s going to ask you to dance,” she said.

Given “he” was Magellan, you can see why we patriotically and romantically celebrate July 1. Especially this year on Canada’s 150th anniversary. In honour of the occasion, Parks Canada has created the Discovery Pass 2017, giving everyone in the world free access to our 47 National Parks all year long. So today, on the country’s and our anniversary, let’s go to two of the best.

Banff, it’s the National Park we’ve enjoyed most over the years. The first place we holidayed together (dancing under black lights at the Grizzly House). The first place we vacationed as a family with Lynn (the May long weekend when she was only a few months old). It was an easy drive from Calgary where we lived for almost three decades.

Spice on the same holiday

In 1990, the town of Banff became a self-governing entity within the National Park, commercialism and conservation butting heads in what’s sometimes referred to as a “stressed marriage.” I remember laughing at a sign on the door of a shop in Banff in the early 90s: “We’re closed. Leave all your money under the door.” But I wasn’t laughing when the Book and Art Den closed and McDonald’s opened. Still, good memories hold fast. Skiing at Lake Louise, hiking Larch Valley and biking from Banff to Jasper National Park with Lynn thirty summers ago.

If Banff is a ruby, Jasper is a diamond. After a niece’s wedding in Jasper, we realized how much its Rocky Mountain small-town atmosphere reminded us of bygone days in Banff. Jasper’s elongated main street of harmonious A-frame mountain architecture, historically rustic in stone and wood, parallels the tracks of the Canadian National Railway, reminiscent of the days when time was measured by the sound of the train’s whistle. 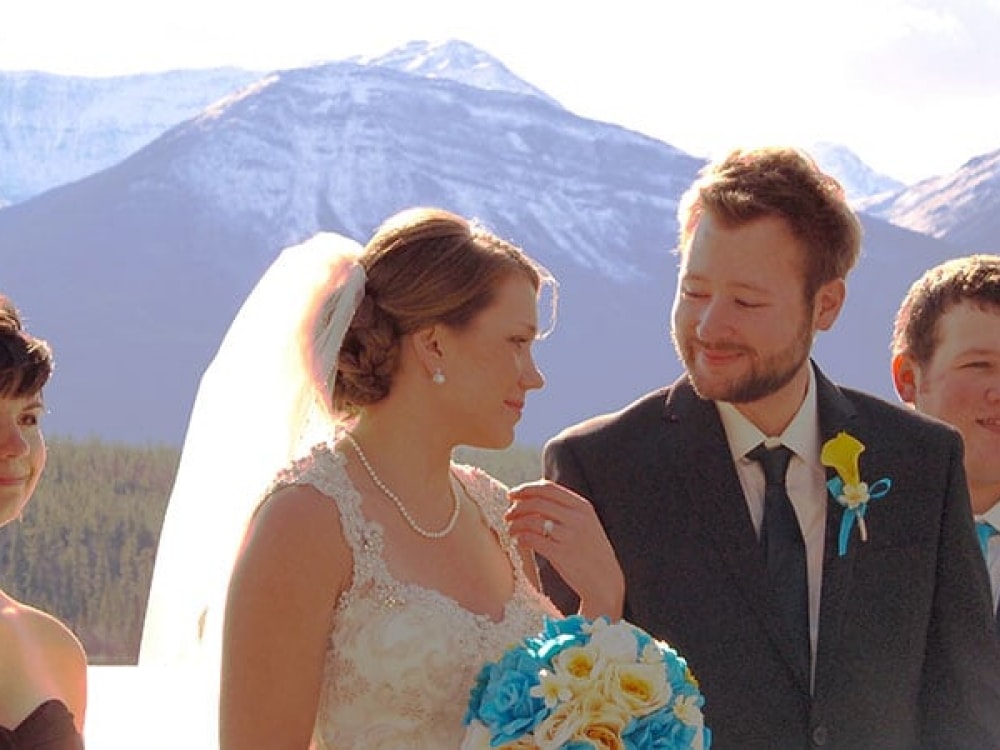 Jasper still has the timeless feel of a Swiss alpine village, but our favourite hotel is more remote, just outside the Park. The Overlander Mountain Lodge is named for the surveyors and settlers who travelled on foot and horseback before the days of the “iron horse.” Hallways lined with black-and-white photographs pay tribute to both those hardy souls and early travellers who vacationed in the log-cabin style rooms. There’s another reason we like the Overlander. You guessed didn’t you? Venture Magazine voted its Stone Peak Restaurant Alberta’s best patio last year and that alone would make it worth stopping for a leisurely drink. But the food is what draws us back. Genevieve’s Borscht, House-Smoked Organic Sturgeon, Pickerel with Navy Beans and Seasonal Vegetables, Butter Chicken…

Mostly alpine wilderness, Jasper is Canada’s largest mountain National Park and a UNESCO World Heritage Site. Like some of the national parks we visited in the US (Big Bend in Texas for example), Jasper is a Dark Sky Preserve. Jasper, with its 11,000 square kilometres of space, is three times bigger than Big Bend, and has the world’s largest Dark Sky Preserve, which is celebrated with a festival every October.

Last summer on our drive back from Saskatchewan through Jasper, we decided to slow down, stay two nights and hike one of Jasper’s many trails, most of them wildly mint-fresh to us.

Consulting a local hiking guide, Don’t Waste Your Time® in the Canadian Rockies, we found this:

Hike to Wilcox Pass and you’ll be disappointed—in subsequent hikes. This will become the benchmark. Few trails anywhere in the world are so instantly and extravagantly gratifying.

Remember I mentioned that we had bicycled from Banff to Jasper in the summer of 1987? When we read that you could hike through the barren tundra with its majestic mountain views to the top of Wilcox Pass and, instead of retracing your steps, descend through the forest and end up on the Icefields Parkway 10 kilometres away from the trailhead, we decided to turn it into a hike-and-bike trip. We hid our bikes in the evergreens alongside the Icefields Parkway across from Tangle Creek, not that anyone would want to steal mine.

“The problem with Wilcox Pass,” Kathy and Craig Copeland say in their guidebook, “is people. Too many of them.” Well-warned, we got an early start. Only two vehicles were parked at the trailhead when we arrived and we saw only three other hikers, two of them from Europe. But by the time we bicycled back, cars were spilling over both sides of the road.

Jasper’s best hike is named after Walter Wilcox who first travelled to the Canadian Rockies in the late 19th century. Walter explored much of the area between Lake Louise and Jasper, beginning when he was only 19 and a student at Yale. A mountaineer, photographer and philosopher, his book, The Rockies of Canada, published in 1909, became a bestseller across North America. But he never did see his namesake pass.

After all the mountain climbing Walter did, the steep ascent through a 400-year-old forest of fir and spruce at the beginning of this hike would be easy for him. In two kilometres that’s over and you’re in treeless meadows of sheep grass (but no sheep) and moss campion with amazing views of the Snow Dome, Sunwapta Pass, Mount Athabasca and its glacial cirques—a panoramic vista that overlooks tourists in buses inching their way up to the Columbia Icefields, tourists who don’t know what they’re missing.

The Columbia Icefield, home to the Athabasca and Dome Glaciers among others,covers 325 square kilometres, its mountain peaks rising almost 3500 metres

Hikers' view of the Columbia Icefields and Icefields Parkway

Athabasca Glacier to the left, Dome Glacier on the right

It was shocking to see how much the Athabasca Glacier has retreated since Lynn, Magellan and I relaxed beside it for most of the day thirty years ago. On that trip, cycling up Sunwapta Pass was easier than we expected and we had pre-paid the night’s accommodation at the Columbia Icefield Chalet. The hotel didn’t take credit cards and we were down to $40 in cash. I remember carefully searching the menu for the highest-calorie count meal to fuel the 100 kilometre cycle to Jasper the next day. Chow Mein and a G&T was my successful combination.

Spice and Lynn along our 300 kilometre bike trip between Banff and Jasper (August, and it snowed)

Shades of blue as we near Jasper

Back to the Wilcox Pass trail. The views continue as you ascend toward the crest of the Pass, the fragile trail cushiony-soft, braided by hikers trying to avoid small pools of water. From there, we hiked down to Wilcox Lake, so small and shrunken that I hoped it wouldn’t minimize Walter’s achievements in the eyes of hikers when they saw it. A good place for lunch.

A miniature waterfall over moss campion

Mount Andromeda and Athabasca Glacier from the Wilcox meadow

Erigeron, commonly known as Flea-Bane and commonly found in the Canadian Rockies, is closely related to the Aster

Small can be beautiful. In Jasper the previous day, we joined a little group of townspeople to watch a highly skilled team of workers lower and perfectly line up the second half of a pre-built home, clapping when the jigsaw piece was inserted. Setting up house is different in a town of 5,000 people. We wondered if it was pride-of-place or if Jasper is vying for Prettiest Town in Canada with all of the flowers, bouquets of colour hanging from baskets on Main Street, gardens of florae in the front yards of people’s homes.

For the last 16 years, Chon, the friend I mentioned earlier, has called Jasper home. “It’s so authentic. Everybody’s so kind and considerate. They rally around whoever needs help. I don’t know where else you’d find that other than in a small town in Saskatchewan.”

(You’re digressing,” I hear Magellan saying, so back to the hike.)

The trail past Wilcox Lake wanders through tundra meadows brightened with wildflowers before descending into the forested Tangle Creek valley and ending up on the Icefields Parkway where we’d hidden our bikes.

And then we saw them.

The climax of the hike.

A herd of mountain goats, including a baby kid—right alongside the road.

Mountain goats by Tangle Creek alongside the Icefields Parkway

A kid in Canada, glorious and free

Because he cycles quite a lot, returning to the Wilcox Pass trailhead was easy for Magellan. On the steep uphill climbs during our trip in 1987, he had to give my bike a push to get me started. But it didn’t work this time.

There’s another thing that makes it harder today for a jubilado. Every fifteen minutes Brewster buses travel back and forth from the Columbia Icefields Discovery Centre to the Glacier Skywalk, Jasper’s newest attraction—and an in a few spots, the Icefields Parkway has no shoulders to move onto.

In J.B. Harkin, a passionate activist for wilderness preservation that led to the 1930 National Parks Act, wrote words that are still true for the experience you can have in Jasper:

National Parks exist in order that every citizen of Canada may satisfy a craving for Nature and Nature’s beauty: that we may absorb the poise and restfulness of the forests; that we may steep our souls in the brilliance of the wild flowers and the sublimity of the mountain peaks; that we may develop in ourselves the joy and activity we see in the wild animals…

Here’s what the Calgary Herald had to say about the town of Banff’s 25th anniversary.

The Overland Mountain Lodge and its Stone Peak Restaurant we recommend.

Travel and Leisure magazine gives its 150 reasons to visit Canada. And guess what?

Number 1: The Canadian Rockies
You can see a different side of the Rocky Mountains. Alberta, British Columbia is home to the northernmost area of the notable mountain range, complete with crisp lakes and snow-capped peaks.

Number 45: Glaciers
Not only can you paddle by icebergs, you can also walk on the world’s most accessible glacier. The Icefields Parkway, a stunning 232 kilometer (about 144 miles) route of icy glacier that cuts through the Rockies between Banff and Jasper is accessible by off-road vehicle from mid-May until mid-September.

Wilcox, Walter. The Rockies of Canada. Canada: Rocky Mountain Books, 2008. This edition is the 1909 version, the final one for Wilcox. Hailed as “an exceptionally thrilling piece of creative non-fiction,” the book became a best seller for travellers worldwide interested in the “vast solitude” (Walter’s words) of the Canadian Rockies.

You can find out more about Walter Wilcox here.

Another Reason we Love our Birth Province

On the Trail of The Golden Spruce
16 replies

A Natural Souvenir from Bhutan