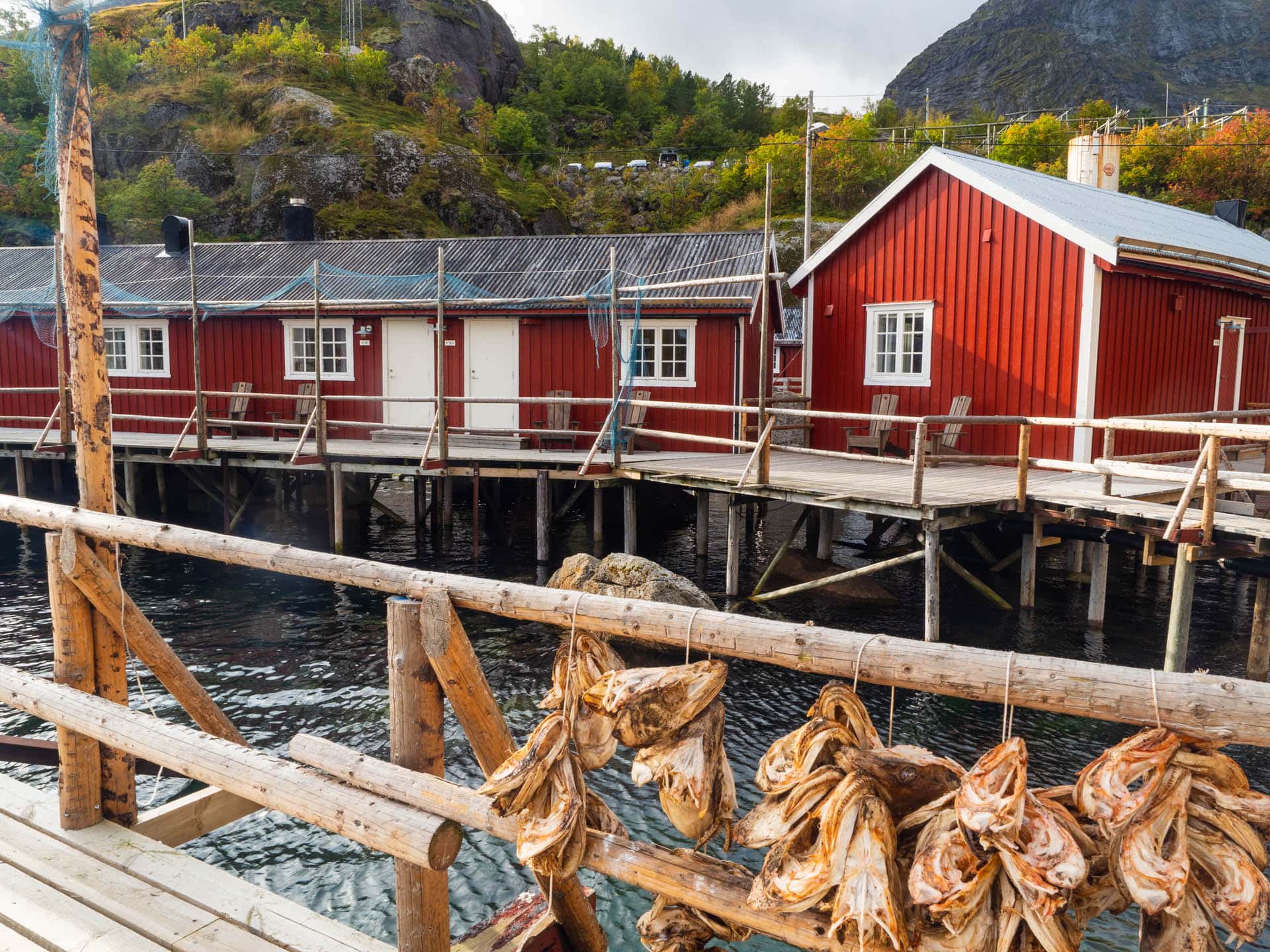 What did Magellan and I eat a lot of in Norway?

Steaming bowls of fiskesuppe, generous with chunks of cod. We ate it twice in Bergen, the city we started out in, and in many other places over the next five weeks, including homemade and store-bought versions in our camper. Fresh cod in restaurants like Credo, Umami and Kontrast and one caught by Magellan off the Atlantic Road bridge. Baccalà mantecato—made from air-dried cod they call Tørrfisk that’s reconstituted and whipped into a creamy cloud then lavished on seeded crackers. Bacalao, a salt cod stew made with tomatoes, olives, potatoes, garlic and shallots for my birthday on Lofoten and a take-out dinner on this same island chain.

After oil and gas, Norway’s largest export is fish, most of it cod. A lot of it is Tørrfisk—Norway’s oldest export—from Lofoten, which nets the country NOK2.4 billion annually. Because it retains its nutrients for half a decade, Tørrfisk was the food that enabled the Vikings to travel farther and longer than their contemporaries.

Tørrfisk awaiting dinner— a lot is exported to Italy

An article in Saveur magazine says, “Tørrfisk is to Norwegian fish as prosciutto di Parma is to Italian pigs.” Like Parmigiano-Reggiano and champagne, Tørrfisk has a protected designation of origin—the first Norwegian edible to earn this honour.

On Lofoten for almost a week in September, we realized how large the Tørrfisk industry is when we saw the many hjells, towering wooden racks where cod (unsalted) is flayed and hung to dry by the natural forces of cold air and salt wind.

The fugitive colours of late summer among the hjells

Jutting into the air, their bony architecture awaiting curing season

Intricate scaffolding that will bear a heavy weight for four months

We didn’t see Tørrfisk  curing. Or smell it, which is described as both a foul stench and the sweet smell of money. The air-dryings happens between February and May when the ambient temperature hovers around 0° keeping the fish safe from freezing (or from spoiling as it would in warmer climates) and evaporating 80% of its moisture content.

Nusfjord, considered the most stunning village in Lofoten

The tiny village of Sund, home to a great blacksmith

In Å, there's a strong a maelstrom here (swirling circular current off the coast of the island)

Å; once there were 20,000 fishermen in open rowboats fishing for cod in Lofoten, ten times more than today

Does Norwegian Arctic Cod taste any different? The texture, I’d say, is firmer and the taste more pure than either Atlantic Cod or Ling Cod from the Pacific. Perhaps it’s because Norwegian Arctic Cod live so far north, in the frigid Barents Sea, the body of water that separates the northernmost regions of Europe from the Polar Ice Cap. They migrate 800 kilometres to spawn in their birthplace in the deep Vestfjord that separates Lofoten from the mainland, earning the nickname “wanderer cod.” After spawning, they hang out awhile in waters 100 metres to 300 metres below surface before migrating north. Unless they’re caught.

Cod can live 30 years and weigh 30 kilos, depending on their food and sustainable fishing practices

Norway has had some of the same problems of overfishing as we did in Canada. When cod stocks rapidly declined after an extreme cooling event in the Barents Sea in 1989, Norway and Russia agreed to close down the fishery. Since then writes Camiel Derichs,

The entire fleet of Lofoten cod fishers worked together to secure MSC certification in 2011. To meet the requirements, they modified their fishing gear and introduced a minimum catch size of 60 cm, allowing smaller fish to grow and reproduce. Rigorous efforts were also made to prevent illegal, unregulated and unreported fishing, an issue that has now been successfully eradicated.

Well, maybe not entirely. Our friend Ed pointed out an article in The Economist, “Norway has haddock enough of fish smugglers.” In the first six months of 2019, border guards seized eight tonnes of illegal catch from vehicles bearing the license plates of Ukraine, Czechoslovakia, Poland, Lithuania and Belgium. Most of the vehicles were loaded with a hundred kilos of fish, ten times the limit. Magellan and I saw evidence of this farther south at Nothavagen Fiskecamping near the town of Kyrksæterøra where we met a couple from Belgium with a van clearly outfitted for carrying an ocean of fish. The article goes on to say that to stop the “piscine flow” (don’t you love the wit), Norway has increased spot-checks and nearly doubled the fines for smuggling.

Magellan gets a mouthful

A face only a dentist could love

Before we went to Norway I made fiskesuppe from a recipe in Saveur, delicious with a kilo of cod and assortment of root vegetables you’d find growing in Norway . I’d planned to include the recipe in this blog. But the only changes I’ve made are adding ribbon strips of seaweed and dots of chive oil, channeling chefs in Norway. Why not just provide you with the link? Besides, it seemed unfaithful to Tørrfisk.

Thumbing through one of my favourite cookbooks, The New Nordic by Simon Bajada, I found a recipe that’s more unique and complex because the ingredients share the Norwegian trinity of pickling, smoking and salting. In Cod, cabbage & smoked rye, Simon intermingles fresh cod poached in milk and canned anchovies to nudge a salty flavour toward that of bacalao, then flakes it into mashed potatoes. I used Icelandic cod, which is close in taste to that from Norway. Red cabbage is pickled—the day before. Although our bbq has a place for hickory chips so I could have had Magellan smoke the rye bread, it’s been snowing here so I followed Simon’s alternative using hickory-smoke powder and toasting the slice of bread in the oven. It’s about the cod. Although Simon’s recipe was delicious Magellan and I felt the potatoes dominated the flavour of the mash. We’ve changed that by reducing the amount of potatoes, giving cod top billing while retaining the delicacy of the dish. 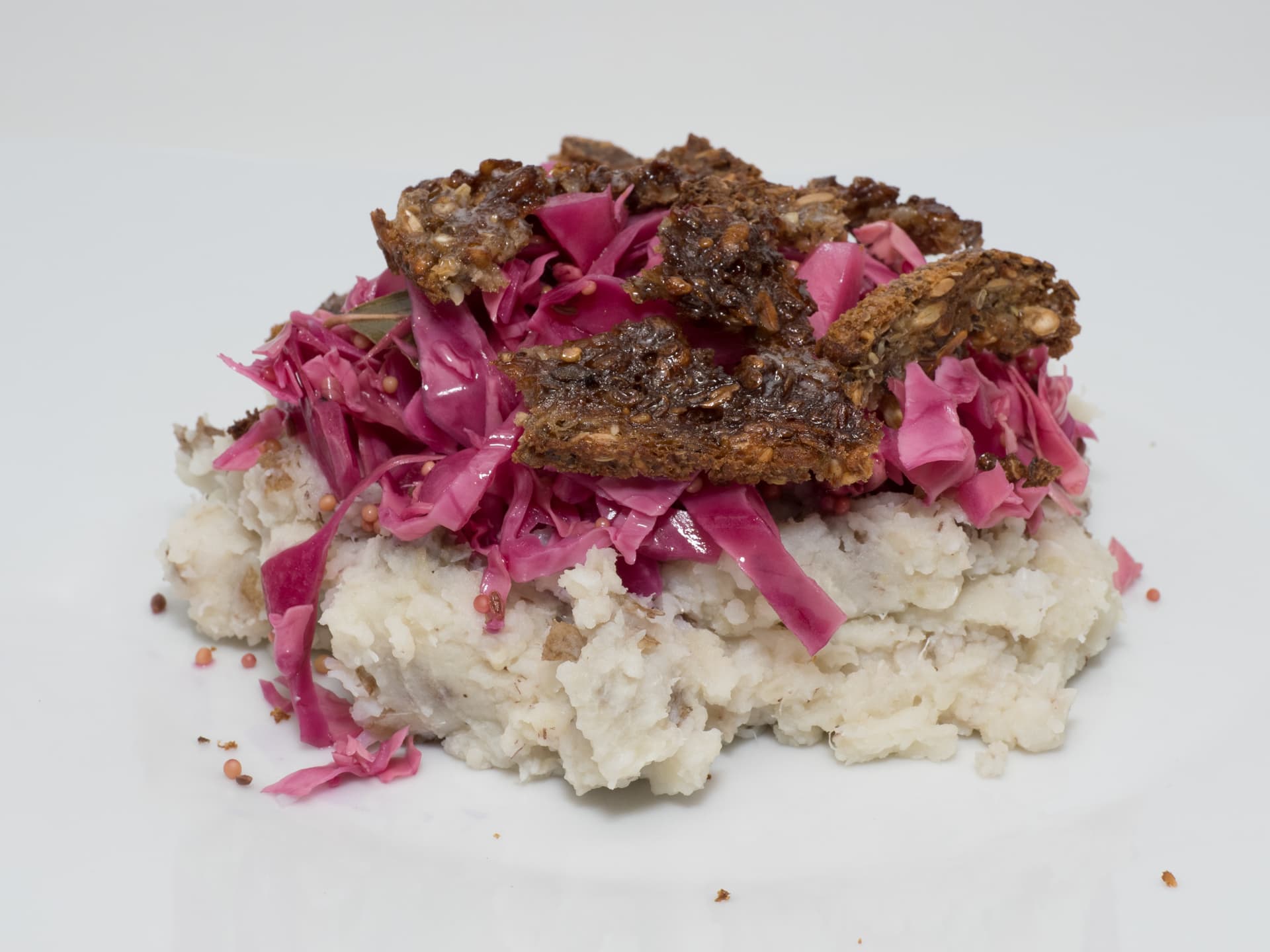 Save Print
First, at least a day before you serve this, pickle the cabbage. Adapted from recipes in The New Nordic by Simon Bajada, I've made it a recipe for two (Simon's is for four but you could easily multiply this for a dinner party), simplified the units of measure (not everyone has a kitchen scale), used rye bread from a bakery (Beyond Bread's seeded rye made on Thursdays if you're in Vancouver), used cod from Iceland and offer the option of using smoked olive oil if you can't find hickory smoke powder for the bread. I reduced the amount of potatoes and left them unpeeled for nutritional reasons.
Author: Spice
Recipe type: Dinner
Cuisine: Norwegian
Serves: 2
Ingredients
Instructions
For the cabbage
For the smoked rye bread
For the cod and potatoes
To serve, spoon the mash on each plate and top with with pickled cabbage and torn slices of bread.
3.5.3251

The Economist. “Norway has haddock enough of fish smugglers.” August 8, 2019.

Pariseau, Leslie. “The Shipwrecked Sailors & the Wandering Cod.” Saveur magazine. September 19, 2016. A great read and the source of this blog’s title—street art by Norway’s Pøbel and Dolk as photographed by Michelle Heimerman. Leslie includes a recipe for fiskesuppe but I prefer another one, also from Saveur, from Penny De Los Santos, published December 15, 2012. However, Leslie’s recipe includes how to make chive oil to dot the top of your soup with bursts  of green.